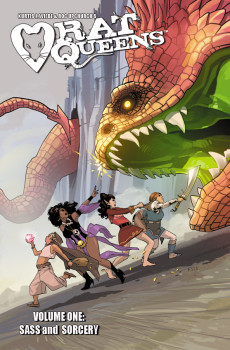 I’ve seen this title compared to Buffy the Vampire Slayer, Tank Girl, and Lord of the Rings. But honestly, it seems to be nothing more or less than a homage to Dungeons & Dragons. Not the novels or the cartoon show or the (ugh!) movie. It’s a homage to the game we played, complete with fighter/magic-user/thief/cleric four-member parties, healing spells as plentiful as aspirin, random monster encounters, and characters who talk more like a group of suburban teenagers than mercenaries in a pseudo-mideval age.

The Rat Queens are a team of four adventurers. Violet is a dwarven fighter who worries a bit too much about her image. Hannah is an elven mage whose necromancer parents occasionally nag her on a scrying device that looks suspiciously similar to a cell phone. Dee is a human, an atheist, and a cleric (because nobody cares who you pray to, as long as your healing spells still work). Betty is a smidgen (because the Tolkien estate owns the term “hobbit” and the Dungeons & Dragons estate probably laid some claim to their alternative term “halfling”) thief who sounds just like someone whose diet consists of drugs and candy. Together, they kill monsters for money, then spend that money on alcohol and drugs (which gets them into more trouble than the monster killing).

The story opens with the Rat Queens (and four other four-member adventuring teams) being arrested for wrecking the city of Palisade on a drunken bender. To avoid a stint in the dungeon, they are each given a quest. On their way to murder a pack of goblins, the Rat Queens are waylaid by an assassin, then a troll. When they fail to find any goblins in the area, they realize that they’ve been set up. Returning to Palisade, the Queens discover that the other teams were similarly ambushed and many of them are dead. What follows are more fights with assassins, a troll army, and the mystery of who hired the assassins to kill the adventurers. Many people die and the survivors get totally wrecked at a party.

Rat Queens is a fairly new series (only six issues out so far), with the first five issues already collected in a trade paperback titled, Sass and Sorcery. The stories in these issues start with fairly conventional fantasy plots, then twist them into bizarre new shapes. There is a lot of profanity, a lot of drinking, and some drug use, so it’s not an all ages book by any stretch of the imagination, but well worth its low introductory price ($9.99) for anyone who grew up playing Dungeons & Dragons. If you’re looking for a comparison, instead of Lord of the Rings meets Bridesmaids, how about Knights of the Dinner Table meets Fear & Loathing in Las Vegas?

Rat Queens, Volume 1: Sass and Sorcery is written by Kurtis J Wiebe, illustrated by Roc Upchurch, and available in both print and digital formats. Find out more about this series (including preview pages and where to order a copy) at Image Comics.

I’ve been told by trusted friends that this is a great series. I’ll check it out.

I’ve been told by friends that this is a great series. It’s on the list.