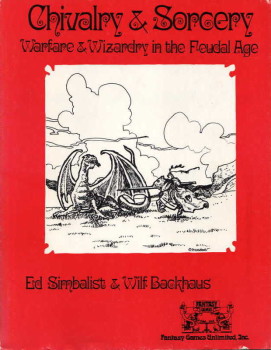 The hobby of tabletop roleplaying games was born in the American Midwest, but very quickly spread beyond the wargames clubs of Wisconsin and Minnesota. Forty years after the publication of Dungeons & Dragons, RPGs are played and enjoyed throughout the world. Many countries outside the United States can rightly boast of their own roleplaying games and designers, some of which, such as Britain’s Warhammer games, have arguably proved as influential as D&D. Since today is Canada Day, I thought it fitting to post a short tribute to two Canadian roleplaying game designers whose work, while perhaps not as widely known as that of Arneson and Gygax, is nevertheless worthy of note, particularly by those of us who have come to appreciate and indeed prefer what has come to be called “old school” gaming.

As everyone interested in such things knows by now, Dungeons & Dragons first appeared in 1974. The originality of its concept inspired others to create similar games of their own, the first being Ken St. Andre’s Tunnels & Trolls, published in 1975. Many more followed, including Chivalry & Sorcery, written by two wargamers at the University of Alberta, Edward E. Simbalist and Wilfried K. Backhaus. C&S was published by Fantasy Games Unlimited in 1977 and owes its existence to some questions Simbalist and Backhaus asked after playing D&D, as they explain at the start of the rulebook:

Chivalry & Sorcery began innocently enough with a discussion about the vacuum that our characters seemed to be living in between dungeon and wilderness campaigns. In the Fantasy Wargames Society of the University of Alberta a degree of dissatisfaction emerged over the limited goals that were available to our characters. The solution was to develop an all-encompassing campaign game in which dungeon and wilderness adventures were just a small part of the action.

Initially called Chevalier, Simbalist admitted in an interview that Chivalry & Sorcery was “a D&D clone in some respects.” The pair even intended to pitch the game to TSR for publication, but chose instead to work with FGU. Chevalier “contain[ed] all of the seeds that would soon spring forth as Chivalry & Sorcery,” which Simbalist believed was “a dramatic departure from the slash and hack approach to RPG that existed in those early days.” 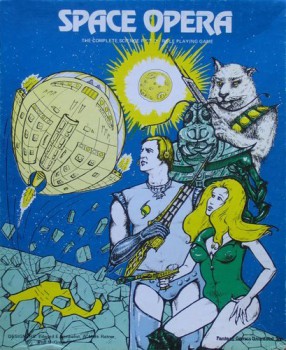 If you’ve played roleplaying games for any length of time, you’ll almost certainly have heard both complaints about the limited nature of this game or that and boasts about how some other game “solves” them or is in some way more “realistic.” As a young person newly introduced to the hobby in the early ’80s, that was certainly the reputation that C&S had. It was alternately regarded as being for “real” roleplayers and as “unplayable” because of its high degree of detail and complexity. I think there’s truth to both characterizations. Compared to Dungeons & Dragons, Chivalry & Sorcery placed a lot more emphasis on painting a picture of the larger society in which adventurers operated. Consequently, Backhaus and Simbalist provided rules and discussions for topics as diverse as social class and influence, laws and justice, royal bureaucracies and ecclesiastical hierarchies – topics Arneson and Gygax addressed only implicitly, if at all, in those little brown books. C&S thus provided referees with the tools for creating settings that approached the depth and complexity of the real medieval world.

That was the theory anyway. Fond as I am of C&S, there’s little question in my mind that those tools were often hard to use and cumbersome. Despite that, at least in the circles in which I moved, C&S was very influential. I didn’t know anyone who actually played the game itself, but the ideas Backhaus and Simbalist advanced through it held a lot of power. I knew many a referee who, even while playing Dungeons & Dragons, tried to make their campaigns “realistic” or “true to history,” whatever that meant in worlds with magic and elves. All joking aside, it’s indeed a potent notion and one that took hold of my imagination too, as I filled pages upon pages of a binder with notes about the social structures, economics, and religions of my fantasy world. I daresay that this was a lot more common than many long-time roleplayers would admit, then and now.

Simbalist would later apply many of the same principles he and Backhaus brought to fantasy to the field of science fiction, when, along with Phil McGregor and A. Mark Ratner, he released Space Opera, also published by FGU (in 1980). Though a diehard Traveller fanatic, I had more direct experience of Space Opera, since it was popular with some of the teenagers who often showed up at local games days. Like C&S, it was both exhaustive in scope and complex in execution and thus didn’t appeal to me at the time. Nowadays, I look on it more fondly, having slowly acquired most of its releases over the past few years (many of them from FGU, which is still in business).

Sadly, both Ed Simbalist and Wilf Backhaus are no longer with us (Simbalist died in 2005 and Backhaus in 2009), which is especially unfortunate as I like to think they would have enjoyed seeing the growing appreciation for early RPGs among contemporary gamers. So, today, I raise my arm in salute of these two early Canadian contributors to the hobby.

When you consider that C&S came out only 3 years after white box D&D, and the same year as the first AD&D book (Monster Manual), this was a big step forward. However the game itself worked better as a wargame (possibly reflecting Ed and Wilf’s background) or as support material for other games.

In comparison Space Opera was much more playable. Scott at FGU originally approached Ed about doing a space game based on Mark’s Space Marines (no not Warhammer…the original Space Marines) universe. The SO rules hold up surprisingly well, and it is still fun to play.

The guy who introduced D&D to Staten Island, as it were, played this a lot. He was a ruleplayer of the first order and I suspect that was part of the game’s appeal to him. He got me and others to play it on occasion and as nostalgic as I am for those early days of gaming, cumbersome is the precise word for how I best recall C&S. Thorough, great to read, and close to unplayable.

> I didn’t know anyone who actually played the game itself,

God that makes me feel better. I bought it when I was 12 and never got it to work.

> I didn’t know anyone who actually played the game itself

*waves*
I did, I never ran it but I played C&S for about 2 years in the mid 80s. I also played Space Opera around that time. We eventually switched to something easier (Rolemaster and Spacemaster)

Wilf Backhaus was also in the SCA, which showed when you read the background history of it.

Describing Rolemaster and Spacemaster as the “something easier” you switched to boggles my mind.

[…] on my list is Chivalry & Sorcery, about which I have rhapsodized before (along with Space Opera). C&S is a game with which I had a very strange relationship back in the day. Most of the older […]