It has been a frustrating few weeks around here.

What I want to do is spend the time not tied up in other obligations writing or working in the garden. What I’ve gotten over the last month is a seemingly endless series of storms (not common in Wisconsin in June; we go more for blizzards than twisters up here), obligations, shenanigans and chaos, and just when I think I’ve got twenty minutes to myself, a minor family crisis pops up.

Bear with me, that’s not as brutal a segue as it initially seems.

When we left off our discussion of the Argonautica, Medea had made the startling decision to murder her brother. Well, technically, Jason murdered him, but Jason isn’t the brains of anyone’s operation.

Jason couldn’t find the brains of the operation.

Jason is dumber than a box of hair. 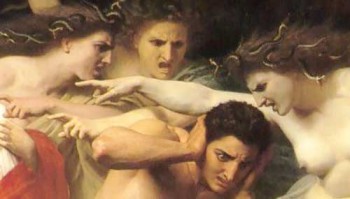 This murder is not only a horrific act in itself. It is, for a member of any of the ancient Mediterranean societies, an existential and religious threat. Murders within the family were not merely crimes; they were foul sins that would result in immediate and crushing punishment by the Furies. Terrible and terrifying chthonic goddesses, the Furies wouldn’t kill you.

That would be too easy. Instead, they drove you to doing the job yourself.

The one way to avoid this fate, as Medea and Jason are eager to do, is to receive expiation and ritual purification for the murder. This is how Medea ends up on Circe’s doorstep (and yes, it’s that Circe of Odyssean fame), asking her help.

No, not asking. She’s too ashamed to speak. But they present themselves to her, on their knees, and beg for her assistance. And why does Circe agree?

She is Medea’s aunt.

It is very easy for us to forget as modern readers that every one of the famous Greek myths is at its root a family drama. And not just because every second hero is a son of Zeus. Castor and Pollux, Jason’s shipmates, are also the brothers of Helen of Troy and Clytemnestra.Their cousin is Penelope, who will marry Odysseus. Those figures who aren’t related by blood are related by marriage or by ties of guest-friendship, a relationship taken so seriously that in the Iliad two heroes trade armor so that they will know each other and not commit the crime of slaying the grandson of their grandfather’s guest-friend.

Circe would much rather be tending her magic herbs or trying to lure in a new pet. But here comes her latest family crisis with blood on her hands. It’s a fantastic scene, because while Circe performs the expiation, she does it unhappily and makes no effort to conceal her displeasure. This is not the playful and sexy sorceress of the Odyssey. Here Circe truly is a goddess and, in typical Apollonian fashion, a irritated ‘maiden’ aunt who disapproves of all of Medea’s choices.

I’ve said before that American pop culture is undergoing an Alexandrian phase. We love reboots, fanfiction, retellings, and remixes. And while many (justly, in most cases) decry the lack of creativity this displays, scenes like this are why we love them. We love taking a well-known character and getting a chance to see them from a new angle. What if the Wicked Witch wasn’t so wicked after all? What was Maleficent like when she was younger? And what is Circe like with her family? When she’s not the Naughty Sorceress, who is she? Apollonius both puts her into this rich an imaginative story and de-mythologizes her. It’s no mean feat and it works to fascinating effect.

After leaving Circe’s island, the Argonauts are again in the realm of the fantastic. Next time, we’ll talk about Sirens, androids, and Steampunk way, way way before it was cool.