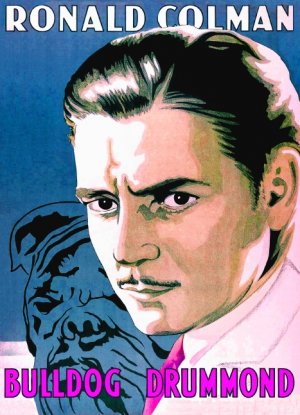 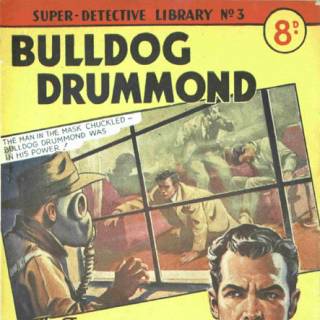 The strongest scenes in Bulldog Drummond (1920) are the ones that show off Sapper’s strengths as a humorist. While it has since become commonplace to see Bondian heroes tossing off quips while being menaced by an unfailingly polite villain, it hardly compares to the way Hugh Drummond handled himself in similar scenarios. Drummond regularly displays a self-deprecating humor when it comes to his features and his intellect, yet his ability to needle villains by refusing to treat them as a serious threat displays an intelligence and understanding of the criminal mind that provides a constant source of amusement to the reader.

Drummond may start off as an independently wealthy and very bored veteran of the First World War seeking adventure, but the character soon transforms into the head of a gang of vigilantes determined to right wrongs as they see fit. He and his gang view meting out justice without resorting to the law as their right as recently demobilized soldiers. The wartime ability to kill without fear of criminal punishment continues into their clandestine civilian activities, although they take the precaution of hiding behind masks and hoods to protect their identities when doing so.

Drummond’s gang includes his fellow World War I veterans Algy Longworth, Peter Darrell, Ted Jerningham, Toby Sinclair, and Jerry Seymour, as well as New York police detective Jerome Green. Later dubbed The Black Gang, the vigilante squad was clearly inspired by Edgar Wallace’s bestselling Four Just Men series. The secret war they wage is aimed squarely against the forces of socialism and communism to an extent that was matched only by Harold Gray’s original version of Little Orphan Annie. The anti-foreign sentiments in the first book are rooted in the perceived threat of foreigners altering the course of England’s political identity and economic status.

There is, of course, one notable exception where the Xenophobia is revealed to be rooted in racial prejudice and that is when the villainous Henry Lakington disguises himself as the East Indian mystic, Ram Dar, in order to pull a con job. Since Sapper handles such scenes with a great deal of humor, he knows well enough to mock the pretensions of the dignified English upper class audience while trading off on blackface humor. While politically incorrect, the scene will inspire him to try to top the sequence with an even more outrageous moment in the second book in the series. 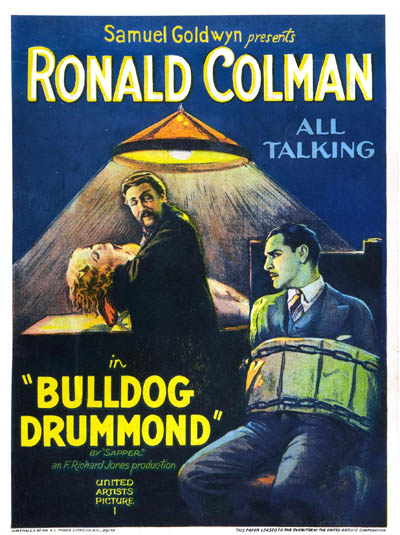 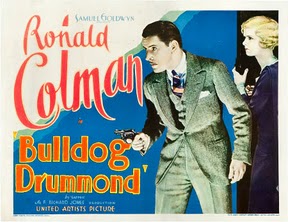 There are weaknesses in the book, such as the mishandling of the pulp standby of the villain using a gorilla as a watchdog, which comes off as ridiculous rather than thrilling and suggests that the author may have viewed the entire proceeding as a lark, rather like his character, except when they veer into extreme right wing territory in suggesting that freedom of speech be denied to socialists and communists. That aside, Sapper does make the distinction that his villains are only using utopian ideologies to further exploit the working class and displace the social order to make themselves part of the elite. The twentieth century had its fair share of totalitarian despots and regimes to at least show there was some merit to Sapper’s paranoid revenge fantasies.

The character of Carl Peterson (who Sapper even suggests might very well be Conan Doyle’s Napoleon of Crime, Professor Moriarty, hiding behind one of his aliases) and his mistress Irma are sadly underutilized as Henry Lakington takes center stage as the principal villain of the piece. Lakington’s best bit is his acid bath where he quickly dissolves the bodies of his victims. Peterson and his gang being headquartered next door to Phyllis Benton (and remaining there long after Drummond discovers the fact) is highly contrived and would suggest that a theatrical setting was an early consideration by Sapper in placing his two main sets close to one another. Mr. Benton barely registers as a character, being quickly superseded by H. C. Potts as the righteous victim of the villains’ dastardly scheme. However, Sapper does not fumble in a brilliant epilogue which sees a disguised Carl Peterson paying a visit to Drummond and Phyllis on their honeymoon to remind him of his vow to have his revenge. It is an exciting finish to a fun, if dated, adventure that promises more thrills to come.

As a quick aside for sharp-eyed readers, the author has one of Drummond’s fellow World War I veterans refer to the Sappers (the unit in which the author served in the war and which provided him with his unique pen name) as “a bunch of barbarians.” Later still, Drummond and the heroic American detective, Jerome Green, consider how fate might have turned out differently had Carl Peterson not become a megalomaniac, but used his gifts for the betterment of all. The suggestion is made Peterson might have retired and become a pig farmer by now, a fate reserved for Drummond himself in future books in the series. Happily, the first book acquits itself well. While undeniably creaky at times, it is still laugh out loud funny in parts and nowhere near as offensive as its reputation suggests.