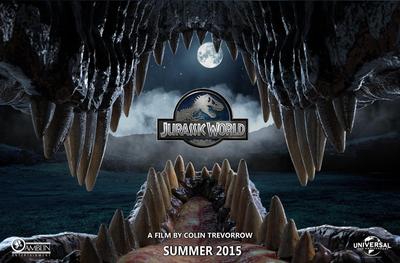 With Godzilla now in theaters and our appetites all juiced up for giant reptilian destruction, it seems like the perfect time to let loose with the latest rumors about the upcoming fourth installment in the Jurassic Park franchise: Jurassic World.

What we know up to this point is that Jurassic World is due to hit theaters June 12, 2015 and that relative new-comer Colin Trevorrow is at the directorial helm.  We also know it stars Chris Pratt (Parks and Recreation), Bryce Dallas Howard (The Help) and Vincent D’Onofrio (Law and Order), as well as Omar Sy, Ty Simpkins, Irrfan Khan, Ty Simpkins, Judy Greer, and Nick Robinson.  And last, we know the plot centers around a fully functional JP theme park.

What we did not know is the direction Colin Trevorrow, who is also one of the writers, would be taking the story.

Much of what I’m about to tell you is rampant Internet rumor, substantiated by more than one source, so if you’re spoiler-averse when it comes to JP4, you may want leave now. 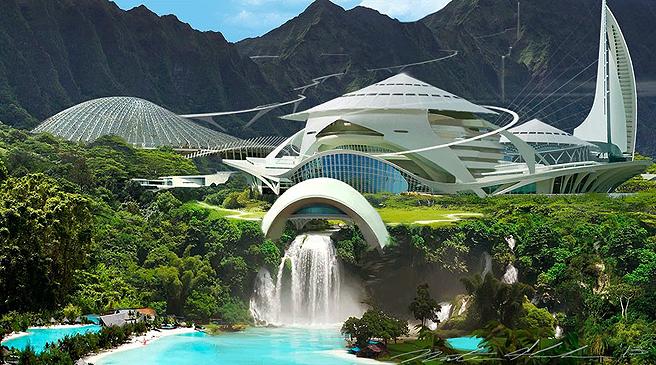 Okay, if you’re still with me, let’s first discuss the park itself.

The Jurassic World theme park, located as John Hammond originally envisioned, on Isla Nublar, is up and running, complete with a monorail, shops, rides, and shows.  As predicted, it has become a wildly popular family attraction and garners 10 million visitors per year.  Of course, it is now completely safe (until it isn’t) and visitors arrive via high speed shuttle boat from Florida, exiting no doubt, into the gift shop.

Inside the park there are a multitude of activities, including a dinosaur petting zoo and a hologram info center where visitors learn about the methods park scientists (InGen?) are using to create the dinosaurs; picture an enhanced version of the original ride where Ellie, Ian, and Alan first saw the dinosaur eggs.

Jurassic World entertainment includes an area called the Isla Nublar Lagoon.  Concept art appears to point toward aquatic dinosaurs finally making an appearance as part of an underwater show, eating a strung up great white shark like it was a fish for a dolphin at Sea World.

Gee, the lack of humility before nature that’s being displayed here, uh… staggers me.

Other park shows feature “tamed” dinosaurs.  One source indicates that the usually menacing Velociraptor will finally be muzzled, along with the T-Rex (until they’re not) and will actually be used as park security.

Security?  Queue the running and screaming.

Business is booming at Jurassic World, which sparks the money-hungry powers-that-be to start dreaming up new ways to keep customers coming back; namely by splicing the DNA of different dinosaur species to create new creatures for the paying public to ooh and ahh over.

That’s when they get the brilliant idea to splice together a T-Rex, raptor, snake, and cuttlefish to create a monstrous new dinosaur which can terrorize like the T-Rex, is deadly smart like the Velociraptor, unhinges its jaw like a snake and has instant camouflage abilities like the cuttlefish, allowing it to blend into the background,

And this is about the point where things go horribly wrong.

Last week, the site Dread Central posted supposedly leaked images of a Jurassic World brochure prop.  If its legit, attractions in Jurassic World also include a golf course, a feeding show and thrill rides; with that last attraction providing a potentially heinous background for an encounter with the nasty hybrid.

Jurassic World is being shot in 3D format, as opposed to post-converted, for an estimated filming budget of $150M.

So JP fans, what do you think? Personally, I like the idea that we’ve finally come round to the theme park being realized, but will it be “new” or just another go at the same formula: man creates dinosaur, dinosaur eats man…?   Well you know the rest.  Post a comment or drop a line to sue@blackgate.com.

Trevorrow confirmed the rumors in an interview today.

RH: Thanks for sharing. Now I am really looking forward to this. With Trevorrow being fairly “new” by Hollywood standards, he might be exactly what the franchise needs.

Hmmm … I was mostly on-board until the DNA-splicing. But I’ve enjoyed all three of the previous movies to one degree or another (I still think Lost World was the best of the bunch) and it’ll have dinosaurs! so I’ll be there on opening day.

(And what do we have to do to get an entirely serious Land of the Lost movie, anyway?)

I am 100% on board with this. What the franchise needs right now is to go crazy weird. I think Godzilla has really opened the door for big monster-on-monster action, especially if we have Chris Pratt training a T-rex to combat a hybrid super beast.

JH: As forgettable as it was, and as loath as I am to remind you, there WAS a Land of the Lost movie in 2009 starring Will Ferrell. ‘Nuff said (tragically).

Harv: We’re all about “crazy weird” here. What time are you picking me up?

GC: Yeah, I (sigh, tragically) remembered that movie. But I want a version that’s not played for comedy. Sadly, I’m guessing Mr. Ferrell has poisoned that well for a while, at least.

So they’re essentially making Jurassic Park: Chaos Effect: The Movie. Who knew Kenner was so prescient…

And Joe, yes that film was a, uh, “Lost” opportunity. (Har, har.) The choice to make a new version of The Land of the Lost into a stoner comedy is one of the most bizarre ever for a major property.