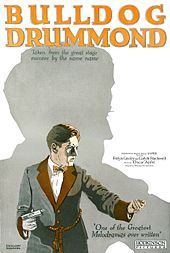 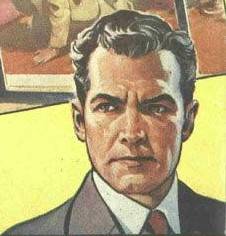 Bulldog Drummond is a peculiar case. The reputation of the original novels is more maligned than even Sax Rohmer’s Yellow Peril thrillers. To be sure, “Sapper” (the pseudonym of author H. C. McNeile) expressed views that stand out as offensive even among the common colonial prejudices of Edwardian England. The reason for this is easily understood. The author’s nationalistic fervor was predicated on the belief that the only good nation was Britain and every other nationality was inferior to varying degrees.

McNeile was a “True Blue” Brit in every way. A decorated veteran of the Great War, Sapper and his characters adore England and are intolerant of everyone else. Americans are castigated for their crudeness, the French are pompous, and Germans are a vile and irredeemable people. More bigoted views will follow, but that is the extent in the first quarter of the first book in the series.

Having covered the bad, what is it that makes the books still worth reading nearly a century later? Are they simply a document of more repressive times or do they offer value that makes one willing to overlook the reliance upon stereotypes and casual slurs? I would argue that anyone interested in the development of the thriller and pulp fiction should be exposed to at least the first four books in the long-running series. There is much that is light and entertaining in Sapper’s fiction, to the extent that they often read like drawing room comedies until thriller aspects interrupt the humor.

A more detailed explanation of the character of Bulldog Drummond is necessary at this point. While the Encyclopedia Britannica appears to be the source of the commonly repeated misinformation concerning his origins, it should be noted the character was not introduced as a policeman in a short story that appeared in The Strand before being reworked for the first novel. I’m not sure where this falsehood started, but I have confirmed with pulp historian Rick Lai that none of McNeile’s stories in The Strand or elsewhere contained a policeman called Drummond. 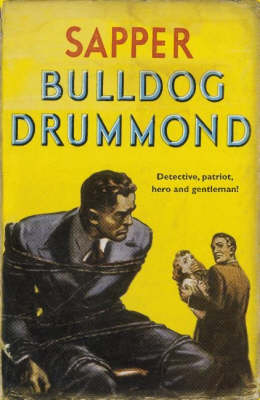 Hugh Drummond, called “Bulldog” for his rough appearance as both an ex-boxer and World War I veteran, is a wealthy young man who finds himself bored senseless with civilian life. Hugh is surrounded by friends from his platoon. James Denny is employed as his butler, while Peter Darrell stays on as a permanent houseguest. Denny has settled down into comfortable married life, while Darrell is content to be a playboy drinking and chasing showgirls whenever possible. Drummond is stuck in the middle, merely wishing to continue the excitement and simplicity of the life of action he knew in France when fighting the Germans.

Consequently, Hugh hits on the plan to run a newspaper ad offering his services as an adventurer. This brings him to the attention of Phyllis Benton, a beautiful damsel in distress whose father, a rather brilliant scientist, has fallen into the clutches of the villainous Carl Peterson and his gang. Peterson is the character whose presence is so compelling to both the reader and the protagonists. While clearly borrowed rather obviously from Sherlock Holmes’ nemesis, Professor Moriarty, Peterson is imbued with enough strength of character to improve upon the original.

The book opens with a prologue in which Peterson gathers a group of wealthy and unscrupulous German and American backers together to finance his plans to destroy England by causing a financial crash that will bankrupt the country. The interesting feature is this prologue in a virtual rewrite of the prologue that introduced the character of Dr. Nikola in the first of Guy Boothby’s thriller novels, A Bid for Fortune (1895). While largely forgotten today, the Nikola books were an influence on Fu Manchu as well and helped shape the modern concept of the criminal mastermind as immortalized in the James Bond thrillers.

While Drummond has Denny, Peter Darrell, and Phyllis in his corner; Peterson is surrounded by his seductive mistress Irma and the menacing Henry Lakington. Unlike the honorable British protagonists, Peterson and Irma are hiding behind aliases (the reader never learns their true identities) with Irma posing as Carl’s daughter for appearances’ sake. Irma appears to have been inspired by the similar femme fatale, Irma Vep from Louis Feuillade’s pulp serial, Les Vampires (1915). Likewise, Ian Fleming’s variation on Carl Peterson and Dr. Nikola, Ernst Stavro Blofeld, was given a similar mistress in the form of Irma Bunt, whose last name displayed the English rhyming slang so typical of the creator of characters such as Pussy Galore.

The first quarter of the book revolves around Phyllis employing Hugh to break her father free of the hold of their neighbors, the Peterson gang. Strangely, Sapper shifts from Dr. Benton to another character as the focus of Hugh’s attention. Hiram C. Potts is the wealthy American financier who is abducted by the Peterson gang and subjected to torture by thumbscrews and drugged with illegal narcotics to break down his resistance to backing Peterson’s scheme. Drummond rescues him in an impulsive commando raid that illustrates his wartime background. From that point on, the cat and mouse game between Peterson and Drummond is on and it is their verbal sparring that is the true highlight of the books, moreso than the intermittent scenes of action and bravado.

Peterson is brilliant, but crippled by his fragile hold on his sanity. Drummond is much more than the two-fisted action hero he initially appears to be, as his quick thinking and witty repartee with Peterson proves. Their conversations have a slow-burn quality to them that tests Peterson’s ability to restrain his emotions while treating readers to Sapper’s strong suit as a writer.

While the books were consistent bestsellers for the first half of the last century, the character found even greater success in film and radio. Ronald Colman earned an unlikely Academy Award nomination for his first portrayal of the character in 1929. While the handsome Colman didn’t resemble a bulldog anymore than Ray Milland, Ralph Richardson, or any of the other actors who essayed the role, he did capture the light banter of the books perfectly.

The name Bulldog Drummond conjures images of a hardboiled tough guy. Sapper’s adventurer may be plenty tough when he has to be, but he is too much of an English gentleman to ever be mistaken for a hardboiled hero. In spite of their failings, Drummond and Sapper deserve to be remembered for the critical role they played in the development of the thriller genre and the entertaining adventures they still offer readers nearly a century on.

Bulldog Drummond reminds me of an oddity; despite the disdain people hold comic book indigenous, native comic book heroes in*, prose heroes such as Bulldog Drummond, Simon Templar, Doc Savage, Tarzan, etc. have usually rarely reached $100 million at the box office in recent decades or appeared on much merchandise.

Quick addition to above post: $100 million at the domestic box office.