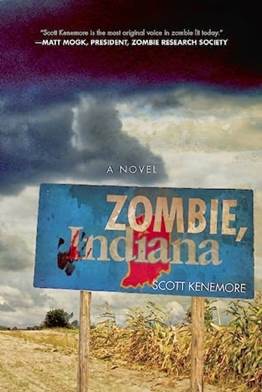 Okay, that was mean.

I’ll save that snark for when Scott Kenemore writes Zombie, Toronto.

Anyway, in case you don’t remember him, Kenemore is the comic genius behind Z.E.O., A Zombie Guide for Getting A(Head) in Business as well as nine other zombie-related works of fine literature.

We met him appropriately enough, at Chicago’s Walker Stalker Con back in March, where he gave us a little inside scoop on his latest in a series of stories which explores the impact of a zombie apocalypse on a state-by-state basis.  So far, Kenemore has already documented his home state of Illinois (mayor is eaten by zombies on live TV; corrupt aldermen try to seize power – typical day in Chicago), and our nearby neighbors in Ohio (college professor becomes a zombie after a car accident, loses his friends while trying to solve the mystery of his own “death”). Now Kenemore turns his attention to the Hoosiers in his latest work, Zombie, Indiana.

The trouble begins when Governor Hank Burleson’s daughter mysteriously disappears on a field trip.  Through machinations of fate, he teams up with Indianapolis PD Special Sergeant James Nolan and high-schooler Kesha Washington to find her.  What he doesn’t know is that each harbors a terrible secret.  As the trio’s mission quickly evolves from search and rescue to a quest to redeem the very soul of Indiana, each on will wonder: can they find Burleson’s daughter before ending up on the dinner menu?

I’ve only just dug into this tasty tale, but Kenemore weaves tension (and some fairly heinous zombie violence) with the right amount of humor and adds just enough satire about the local folks to make this a highly entertaining read thus far.

Zombie, Indiana will be unleashed on humanity on May 6th.  Until then, check out Kenemore’s Zombie Blog. And remember – you’ve been warned.

What do you think would happen if zombies invaded your hometown?  What about your place of employment?  Come on, the material is probably endless.  Post a comment or drop a line to sue@blackgate.com.

I’m not from Indiana, but I live there. Except now, when I’m Globetrotting. (Me and Meadowlark Lemon, we’re tight.) It’s my personal observation that zombies have long ago taken over Indiana’s government, from statehouse to township.

I must, however, point out that I do not believe in zombies. I do believe in the nineteen-year-old student I taught this semester who in fact admitted to hoarding food and other supplies to ward off disaster in the event of a zombie apocalypse. She’s from Kentucky, which I suppose most readers will know shares a border with Indiana. If zombies can swim, find a bridge, or pilot a barge, they’ll be on the KY side any day now.

Gentlemen, I am humbled by your observations, but a little disquieted by Mark’s in particular – at least at first.

I thought “college student believes in a potential zombie apocalypse?” and then I read further to “Kentucky” and I relaxed a bit. I will alert Mr. Kenemore that this must be without a doubt the subject of his next book. The material would be endless.

And Art my dear, that witness protection program is of no use at all if you keep giving bits away…

Sue: “then I read further to “Kentucky” and I relaxed a bit. I will alert Mr. Kenemore that this must be without a doubt the subject of his next book. The material would be endless.”

Since we have one 50 states, and about a dozen or so U.S. territories, Mr. Kenemore will have to result to other provinces and countries; or, as Sue suggests, start naming his zombie books after cities.

Geez, what is it with Indiana? Remember the short-lived Eerie Inidiana TV show?

EMC – Indeed I do, and actually, the idea that Elvis didn’t die, he just retired to Indiana is rather, I don’t know, is “fetching” the right word? And to be fair (please mark this date on your calendar) the book “Weird Indiana” actually made me want to visit.

Of course it was for all the wrong reasons, but still…

James McG – I imagine we all agree that to make fun of Toronto might be too easy. Zombie, Cleveland…?

Hm… with zombies here in Indiana, maybe someone could make a play on Hoosier = Who’s ear? Also, you could inject some Amish zombies. Or have some character say, “Well, now they’ll never complete I-69.” (Hoosiers would get that last one.)

And being from Chicago means no highway construction project jokes would ever be lost on me.

Re: “Well, now they’ll never complete I-69,” you’re right — at least not if the zombie apocalypse comes first.

As for Indiana itself, let’s not forget that we produced James Dean, so we must be worth something. And as for my food-hoarding collegian, I asked her what she does at the end of the semester, and she said she gives the food away to friends. I pointed out that this was the weak link in her armor, and she said that she knew this, but her father refused to allow her extra food into the house (on what grounds she did not say), and she she looked glum about this. Let’s hope the z.a. doesn’t happen just as spring semester lets out, eh?

Chick: I can’t believe I didn’t even get a single comment on the ‘What happens over Vegas stays over Vegas’ line. You are slipping, Chick 😉

Oh Art, the very idea that I could ever disappoint you give me the chills.

I have been rather distracted what with all the comings and goings in the Black Gate offices because of C2E2 being in town.

Stan Lee can be so tiresome. He keeps coming round to try to convince John to advertise his cologne and when that fails he inevitably shows up in my basement asking to use the blender.