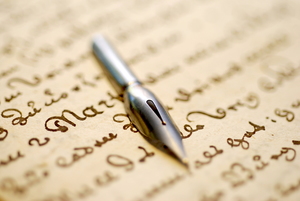 I’m often asked at book signings and other public events about the process of writing and publishing. How long does it take to write a novel and what happens after you’re done? In this blog, I’ll cover some of the different aspects of the process from my perspective. I’ll start at the beginning: the story seed.

How does the idea for a book begin? It could be anything, an interesting situation from real life, a scene from a movie that gets you thinking, a smell that reminds you of childhood summers, or maybe you read a book and thought to yourself, “I could do something like this.”

Once you have an idea for a story, the creation process begins. I’m not going to get into the specifics of how to write fiction or all the things people say you should do before you start your first novel. If you want lessons to hone your craft, there are roughly fourteen bajillion books about writing on the market. Some are helpful; others not so much. Or check out one of my earlier blogs here on Black Gate (Nobody Gets Out Alive: Writing Advice from the Cheap Seats).

So how does that initial spark transform into a living, breathing novel? For me, the first thing is to make sure I’ve got a viable story idea. You can write about almost any situation that humans (or nonhumans) find themselves in, but to hold a reader’s interest for three or four hundred pages is a tall order. Not every story idea can stand up to that. So I daydream. Yep. I sit at my desk and daydream about the idea. I wonder where would be the ideal setting for this story. What kinds of characters would play the lead roles? Most importantly, where’s my conflict? Is it a story about love, honor, war, spelling bees, or horse whispering? As the idea grows, I write everything down. Much of this will get tossed out at some point, but it’s important to record it all now before the magic of the idea wanes.

The next step for me is structuring the story. Some writers just dive in, but I use outlines for novel-length works. (You should use whatever system works best for you.) The outlining usually takes two to three months, which sounds like a lot, but it cuts down my revision process by roughly the same amount of time. When I’m finished, I have a scene-by-scene blueprint of the story. I know what every character is doing, and why, the conflicts they encounter and the results. With this document finished, I begin the actual writing. 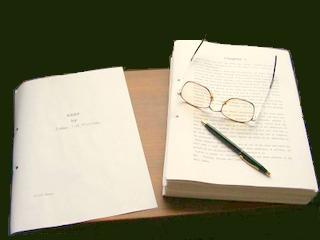 Writing a 100k-word novel will take me about four to five months, depending on life’s distractions. But remember, I also had to create the outline, so total creation time for the first draft can fall between five to eight months. This is my favorite part of the process, and I don’t think I’m alone. There is something special about creating a unique piece of fiction out of nothing. Some days are tougher than others. Sometimes the prose doesn’t flow as smoothly as you might like, but that’s when you have to dig in and tell yourself, “I’m a professional. This is my job, so get to it.”

After the fun of writing, the hard work begins. I have a first draft, all sparkly and new (or dull and dreadful, depending on my mood), and the next phase is revising it into something readable. I start by letting the manuscript sit. It’s like letting a wine breathe. I have to get away from the project for a little while to gain some much-needed perspective. So I work on something else like a short story. I try to take my mind off the novel for at least a week, two if I can hold out, but it’s tough because I really, really want to dive back in and start making fixes.

After the break, I go back and read the first draft. I try to do it in as few sittings as possible. One sitting would be ideal, but I usually can’t read an entire book in one go. While I read, I try not to make any changes (but, being a perfectionist, I can’t help myself sometimes). I do take notes, however. What I’m looking for in this first read is coherence and pacing. Does the story move well throughout? Are there major plot holes I didn’t see before? Are the characters and situations convincing? All that goes into the notes.

After the first re-read (there will be more), I devise a plan of action. I typically start with plotting — patching the holes and smoothing out the rough edges. I often have to delete entire scenes and write new scenes from scratch, or maybe mess with the order of events until it makes more sense. Next, I move on to the characters. How can I make them seem more vibrant? I like my characters to act like real people (caught up in terrible circumstances). Do the relationships feel authentic? Am I using the most effective point of view in each scene? And this is also where I address worldbuilding, because the setting is like a character, too. It has to evoke the right atmosphere in every scene. All this cutting, rewriting, and rebuilding takes a couple months.

The last phase of revision is the polish. Fixing the language, making it tight but expressive, seeking out tired clichés and overused words. When I’ve finished the polish, I have a semi-completed manuscript. Yay.

Once I’m done, I give the book to my beta readers. These are people I trust to read it and pick it apart for my benefit. It’s most important to have readers that you respect and trust, and who will tell you the brutal truth without stomping on your guts. This is also the point at which I’ll send the manuscript to my agent. Some agents aren’t willing to edit their clients’ work, but mine does, for which I’m exceedingly glad because he’s got a great eye for problems that can trip up a novel.

After I’ve collected all the feedback from my readers and agent, I pour over them and make the changes that I think the manuscript needs. The deciding is important. I don’t make every change suggested. At this point, I’m still in charge of the manuscript. First and foremost, it needs to please me. After this latest revision, I read over the entire manuscript again, looking mainly for consistency issues and flow. When I’m satisfied, I send it off to my publisher and the waiting begins.

I’m fortunate that my editor doesn’t make me wait for very long. Usually within a few weeks, he’s gotten back to me with his thoughts on the book. You’re allowed to argue against changes you feel strongly about, but I would only suggest going that route if you feel a change will severely alter the heart of your book. We’ve all heard stories about authors who refuse to be edited, and maybe you’ll agree those are the books that really, really needed more editing. It’s not a contest of wills. The editor wants the same thing you want, to create the best book possible. Being too thin-skinned to take criticism is a good way to stall your career. Just my two cents. 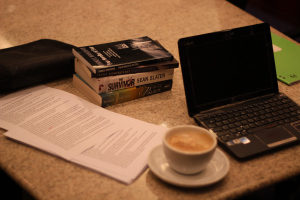 Anyways, so after I’ve made the editor’s changes and sent the manuscript back, I’m waiting for the next phase of the process.

Actually, that’s not completely true. Ever since I turned over the semi-completed manuscript to my beta readers, I’ve been working on the next book. That’s because, like professional sports, writing for me is a year-round job. Also, if I stay away from it for too long, the creative muscles start to atrophy.

Anyway, the next phase of the publishing process is copyediting. The copyeditor’s job is to ensure a manuscript is as consistent, accurate, and error-free as possible. About three to four months after I’ve submitted the manuscript to the publisher, I’ll receive the copyeditor’s version with more suggested changes. Most of these are grammatical (to which I almost always bow to the c.e.’s expertise), but some are substantive. For example, with my first book the copyeditor noticed I had mixed up the phases of the moon over the course of several chapters. Now that’s a detail that 99% of readers wouldn’t have noticed, but she did. She also noticed when a character’s eyes changed from green to blue without explanation.

So, I make the copyeditor’s changes and send it back to the publisher again. (Seeing a pattern?) At this point, the book is largely out of my hands. The publisher will give me a glimpse of the cover art. Maybe a month or two after the copyediting phase, I’ll be sent the galleys, which are the pages of the book laid out the way they will appear in print, with the proper font, spacing, margins, etc… I read the galleys from front to back, looking for typos and mistakes in the formatting. This will likely be the last time I see the book before it’s sent to the printers. I mark any changes that need to be made and send it back.

In the coming months, Advanced Reading Copies (ARCs) will be sent out to bloggers and reviewers, blurbs will be collected from other authors, and the final package will be put together. A few weeks before the releases, I’ll receive a special box. Inside are my author copies of the book. There are few things in this world sweeter than holding your printed and bound baby in your hands for the first time. The smell of the paper, the gloss of the cover. Of course, I have to read it again!

After that is the fun part. Setting up book signings, doing interviews, and — of course — going to the bookstore to see your book on the shelf. And that’s when it hits you. You’re a published author. You don’t remember all the delays and headaches, all the nights worrying about whether the second act is strong enough. It’s all worth it and everything is right with the world.

Until you get home and look at the half-finished manuscript for the next book on your computer screen.

This post is another reason I’m regretting not getting a Masters at Seton Hill. Thank you–that was a terrific and inspiring post. I might dust off that old novel and give it a new try.

[…] The Publishing Process: Building a Novel from Concept to Bookshelf […]