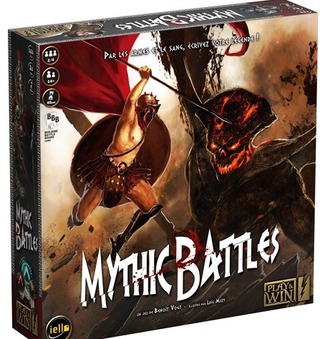 When you’re a collector, your enemy is the impulse purchase. Unless you’re independently wealthy — or you collect caterpillars or something — you need to budget carefully, and make every purchases count. Your goals are ambitious, and one or two impulse buys can leave a carefully thought-out acquisition plan in ruins.

All this goes out the window at an auction. Auctions are all about the impulse buy. A tantalizing treasure is on the auction block for a scant 15 seconds — just long enough to think, “What the heck is that? Is that the guy from 300, or some kind of Spartan paratrooper? Man, I bet Drew would play this with me. Wonder if you can play the guy with the glowing forehead? Is there a Kraken miniature? It’d be worth the 10 buck opening bid just to get a Kraken miniature. OMG it-must-be-mine” — and then bang, the auction is over, you’re the proud owner something called Mythic Battles, and you’re out seventeen bucks.

Mythic Greece is in chaos: Athena and Hades are at war and have sent their greatest heroes to battle. Take on the role of these generals out of legend, leading fantastic armies and lead your troops to victory!

Mythic Battles is a game which simulates epic confrontations and battles that will take your breath away. Thanks to its innovative system – the Building Battle Board (BBB), which combines game mechanisms from miniature games, board games and card games – Mythic Battles offers you an experience the likes of which you have never seen. Recruit your army, play your cards to activate your units, roll your dice to resolve combat – reinvent your way of playing!

This box contains two complete armies to play with two or four players, an initiation campaign, as well as all that’s required to play as you wish. Other armies and units will periodically be released to flesh out your campaigns.

I bought my copy of Mythic Battles at the Games Plus Spring Auction and so far I’ve been very pleased with it. It was designed by Benoit Vogt and was published by Lello/Play & Win in 2012, with a retail price of $49.99. There have been two expansions: The Bloody Dawn of Legends (2013) and Tribute of Blood (2014). And no — there is no Kraken miniature (I know. What were they thinking?)

Dropping “so far I’ve been very pleased” into Google Translate…

“I’ve managed to keep it in the shrink wrap while shopping for a second copy.”

It’s trying to find that second copy without making an impulse buy that’s really killing me.

And God help me if that one’s shrinkwrapped too..

This is one i haven’t heard of!

Have you covered your spring haul yet this year or did i miss that post?

Nope. I need to clear the various piles of books off the living room floor so I can do my traditional loot pile pic. It usually takes me a while (I didn’t post the 2013 pic until just before the 2014 auction… I hope to do better this time!)

Talk about breaking the collecting budget: you don’t want to know what I just paid for a 1st edition Deities and Demigods with the Cthulhu and Melnibone sections. I won’t be buying anything else for a while. Food, maybe.

Ever so glad I managed to purge the collector gene from my DNA (along with the need for speed gene–good riddance to both).