So February’s come and gone, a bunch of new stories have been published, and some were very good. With five stories from five different authors, it’d be an exciting month if I loved all of them, but at least there were more hits than misses.

Let’s start with the February issue of Curtis Ellett’s Swords and Sorcery Magazine. It’s Issue #25 and first of the magazine’s third year of publication. That’s over fifty stories published — fifty new works of heroic fiction out there for free! Lots of writers are getting to see their first published stories — some good, some fair, some poor — out in front of eyeballs and in position to get feedback.

Even if I sound like a broken record every month (Dad, what’s a record?), I can’t urge everybody enough to check this and the other web ‘zines out and let the editors and writers know what you think. This is how the genre will continue to grow and evolve. As readers, we can do our part by supporting these magazines and these writers.

Issue #25, is equal bits weak and and strong. First, the weak: “The Wedding Gift” by Neil W. Howell. It’s a story of the moments around the arrivals at the church of a royal bride and a royal groom, told from the perspectives of several different observers. There are the war veterans now serving as guards outside the church. Then there’s the embittered mother of the bride, a disappointed and defeated queen.

They and others weigh in on the events that have led to the wedding, which is really only a plan to end a generation-long war and unite two kingdoms in peace. Into this hopeful moment comes a terror that may or may not be an accident and leads to unforeseen conclusions.

“The Wedding Gift” is mostly a good story, but unfortunately it’s marred a little by some distracting word choices. One character actually mutters “Good gravy.” Another character runs around calling someone a chicken and squawking, “Bok, bok, bok!” There are some elements I really like in “The Wedding Gift,” such as the use of multiple viewpoints and the mystery about what happens at the wedding in particular.

“Husks” by Gerry Huntman is, on the other hand, pretty good with solid writing. While there’s not much to the main character, Myleana, the crimes she uncovers have an affecting and sorrowful resonance.

Myleana is a member of the Guild of Astrologers and in service to the crown of Evyntyde. One night, she is set a special mission by her guild’s head, Grisbier: a young man, a member of a wealthy family known for plotting against the king, has been murdered. The possibility that the murder is tied to political machinations is too important not to be investigated, so Myleana is sent to the mortuary to find out what really happened.

The astrologers of Evyntyde are really more necromancers than just horoscope-plotters. Myleana and her fellow guild members can temporarily call up the spirits of the recently deceased. Using those powers, Myleana follows up on the crime. Her investigation leads her down a trail of other crimes and woeful events. It’s a good example of how to write a fantasy mystery tale.

After several months of nothing to pique my interest, Beneath Ceaseless Skies has returned to heroic fiction. In Issues #140 and #141, three out of the four stories BCS rolled out last month qualify as heroic fantasy. Two of the stories are by authors brand new to me and rank among my favorites of the past six months or so. This is why I love these magazines. 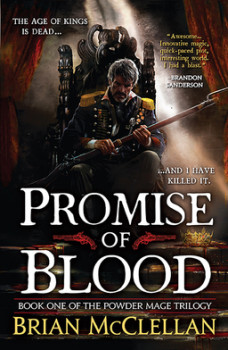 I liked both of Issue #140’s stories. The first, “The Face in the Window” by Brian McClellan, is set in the world of his Powder Mage Trilogy. I had never heard of him or the series before, but a little research shows his books are pretty popular. Based on this story, I can understand why. While I guess it falls into the sub-genre of gun powder fantasy (a term I promise to never use again), it’s got magic and barbarians, so that’s good enough for me.

Taniel, a politically connected university student from the country of Adro, has been sent to Fatrastan by his father to “see the world” between school terms. During Taniel’s month-long ship journey to Fatrastan, its citizens, colonists ruled by the kingdom of Kez, have rebelled against the royal forces. On learning this, Taniel immediately asks where he can enlist with the rebels.

Taniel is a powder mage, a sorcerer with the ability to manipulate gun powder and direct the path of bullets. The school of magic he studies was developed expressly to counter the sorcerers of Kez, known as the Priviliged. They are powerful elemental enchanters, capable of bringing lightning bolts down on their enemies.

There’s plenty of action and adventure in this short tale. There are battles, noble sacrifices, and noble savages. The bits and pieces of the world that are exposed were enough to make me want to know more. Taniel is clearly an important character, but we’re given only tantalizing hints about why that might be. This is one of those stories that makes me want to hunt down whatever I can by its writer. (In fact, I just bought the first Powder Mage novel, Promise of Blood.)

“Atonement” by Alec Austin was interesting, but its unexplained mix of the fantastic with Zoroastrianism, Buddhism, and Southwest Asian place names threw me a little. Since I’ve liked the stories I’ve read by Austin in the past, I told myself to lighten up, let it go, and just follow along on his band of soldiers’ adventure.

Captain Zrana and a company of soldiers, informally known as the “Hellhounds of Surnam, the Butchers of Bursa”, have been sent to the ruined city of Dahar. The city’s destruction came at the Hellhounds’ hands and the ghosts that haunt its remains are because of them. The Hellhounds have been sent to kill an old comrade, General Turghar, who has gone to Dahar before them for some unknown purpose. To aid them in their task, the queen has sent a Zoroastrian priest and a Buddhist exorcist along with the soldiers.

Any more information about the plot would be giving things away. Austin’s characters have just enough life to them that I’m curious about what they did in the days before “Atonement” and in its aftermath. He’s always able to convince me there’s something more going on in his characters’ heads than is actually happening on the page and he’s very good at creating the sense of a great big world existing just beyond the edges he’s laid out.

February’s final story is “Pilgrims” by Ann Chatham. From BCS #141, it tells of a lone woman, unnamed for most of the tale, traversing a war-stricken and God-forsaken land in search of a certain holy site. To a wandering knight on his own pilgrimage to all the saints’ shrines in the devastated land she says

“I seek the root of the Tree that the Lord cut down to end His war, that I may build a shrine at its heart, and burn an offering there.”

I liked “Pilgrims” very much on my first reading and even more the second time around as I prepared to write this article. Chatham has written a sad, but not depressing, story of loss and atonement. The woman carries a heavy burden only slowly revealed. The knight bears the weight of his misdeeds and crimes, and is engaged in his own mission of repentance when he comes across the woman. Both these characters’ stories caught me and held me till the very end. Chatham’s published only a few things previously, but she’s definitely a writer I’m adding to my must-read list.

So two very good stories, two pretty good stories, and one with some disappointing bits. That’s a pretty good rate of return for an investment of no money. Next week, I’m going straight into the dungeon of S&S for an encounter with Kellory the Warlock by the still-controversial Lin Carter.