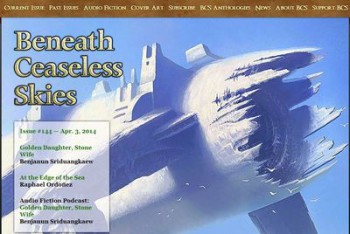 This is really the March and first week of April short story roundup. While Swords and Sorcery Magazine came through with two new tales, Heroic Fantasy Quarterly did not come out in a timely enough fashion to suit my schedule. Then Beneath Ceaseless Skies spent all of March publishing science fantasy issues. It’s all right if you’re inclined to read that sort of stuff, but I’m here to write about fantasy, preferably of the heroic kind.  Actually, most of those stories in BCS really do look all right, but the arrival of a new story by Raphael Ordoñez in the April 3rd issue made me include it in this week’s post.

I joke about Beneath Ceaseless Skies’s neglect of heroic fantasy in favor of steam punk or sci-fi, but don’t ever make the mistake of thinking I don’t love the folks over there and everything they’re doing for speculative short fiction. Every two weeks, they publish a very well-polished magazine with stories by great writers from all over the sci-fi/fantasy spectrum. There are few platforms getting as much new material out in front of the public (and for as little money). And if, like me, you don’t like what’s in one issue, there’s a great chance you’ll find something in the very next one.

So, after all that praise, let me start off with a story from BCS #144 I didn’t love: “Golden Daughter, Stone Wife” by Benjanun Sriduangkaew, a writer unfamiliar to me. In a world peopled by exiles from some unknown calamity, in a country ruled by the Institute of Ormodon, a woman mourns the loss of her golem-daughter.

Hall-Warden Ysoreen Zarre has been sent to retrieve the remains of a golem from Erhensa, an exiled sorceress. All golems, whomever makes them, belong to the Institute. Having learned of the thing’s existence when it “died,” the Warden was dispatched to collect it. For the Institute, it is something to be studied and understood. Erhensa, though, considered the golem a daughter and is reluctant to submit to the Institute’s demands. Her maneuvers around the Warden comprise the rest of the story.

Of course, a story doesn’t need physical action to succeed, but if the action is going to be the interplay between the characters, then they need to have some life or depth. While there’s a fair study of Erhensa’s motives and memories in “Golden Daughter,” Ysoreen never became more than a cipher to me. Her actions read as too sudden and her motivations weak. There are bits of strangeness I liked, but overall it never managed to interest me in its two characters.

“At the Edge of the Sea” is Raphael Ordoñez’s third story to appear in BCS. “Misbegotten” from Issue #113 made it to the 2013 Locus Recommended Reading List. I reviewed the other, “The Goblin King’s Concubine” here last September. As with “Concubine,” I was captivated by the odd world of this new story.

For some unspecified crime against nature, a man has been exiled to the tiny islet of Hatera. It is so small it “takes less than half an hour to walk its shoreline.” Supplies are brought regularly to keep him alive to suffer the isolation and confinement.

In order to escape the madness he feels looming, the exile decides he needs to do something. Surveying his tiny kingdom, he decides to build a spiral jetty. He spends his mornings searching for the right rocks and then each afternoon he does the heavy labor of placing them in position.

During the spring of the first year, the exile discovers his island is the mating ground for great crustaceans. Many of the females are attracted to his jetty. This, he tells us, reminds him of

The exile makes a discovery that proves the stories he remembers are not fables, but part of a great, forgotten history of mankind and its connection to the sea. In the end, his archaeological find leads to transfiguration and freedom. Inspired by beachcombing and works on marine life, this story, filled with wondrous and rare visions from out of the ocean deeps, is one I highly recommend.

Caw Miller’s story of ghosts and lost love, “Ghost Militia,” is the best of Swords and Sorcery Magazine Issue 26’s two stories. Every few years, an army of ghosts marches through the night streets of a tiny village. They have been cursed to protect it in death after having failed to do so in life. With each visit, they take a citizen to fill their ranks. On those nights, everyone hides, but someone is always unsuccessful and ends up serving in the militia.

Yinette and her betrothed, Larn, are out of the village when the warning is sounded that the militia is afoot. Yinette makes it home in time, but is tempted to spy on the ghosts. She does and manages to slip out of sight before they see her. Her mother warns her, quite sincerely, that having looked at them means the ghosts will probably take her next time.

The next morning, Yinette learns what she believes is the true cost of her spying — Larn has been taken by the ghosts. One night when bandits attempt to ravage the village, the ghosts appear and Yinette sees Larn among them. For the rest of Yinette’s life, as she marries, raises children, grandchildren, and great-grandchildren, Larn is never forgotten. “Ghost Militia” isn’t full of surprises, but it is well-told and worth your time.

“The Yardstick” by Will Weisser is the story of two brothers hoping to join the elite military unit, the Saracens. Each potential new soldier must be measured by a magical yardstick to determine if he is prepared to pay the price of service. He is confronted, within his mind, by the Lady, the great sorceress the Saracens serve, and the sacrifices he will make for her.

There’s not much to “The Yardstick” to dislike. The narrator’s concern for his little brother is touching and feels human, while the situation in his head while being measured by the yardstick is exciting. It’s just with characters named Flatpate, Big Tym, and the Lady, I felt like I was reading a forgotten couple of paragraphs from Glen Cook’s Black Company.

Here’s hoping BCS will give us some more fantasy and Heroic Fantasy Quarterly will make its belated appearance shortly. I know I can count on Swords and Sorcery Magazine to deliver the goods before April’s done.

Thanks for the kind review. I rewrote that story right after I listened to a Moby-Dick audiobook while driving across several states.

You’re welcome. Your stories’ worlds have a captivating strangeness to them I thoroughly enjoy.