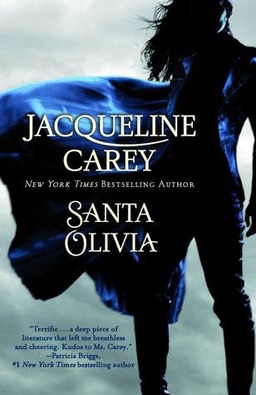 I didn’t pay much attention to Jacqueline Carey after that, and as a result I almost overlooked her highly regarded Santa Olivia. A significant departure from her previous novels, it has been described as “Jacqueline Carey’s take on comic book superheroes and the classic werewolf myth.”

Set in Outpost 12, a small town in a buffer zone shielding a near-future Texas from plague-devastated Mexico, Santa Olivia follows a group of orphans who decide to strike back against the oppressive military rule. All in all, it sounds like a pretty captivating mix — and well worth checking out.

There is no pity in Santa Olivia. And no escape. In this isolated military buffer zone between Mexico and the U.S., the citizens of Santa Olivia are virtually powerless. Then an unlikely heroine is born. She is the daughter of a man genetically manipulated by the government to be a weapon. A “Wolf-Man,” he was engineered to have superhuman strength, speed, stamina, and senses, as well as a total lack of fear. Named for her vanished father, Loup Garron has inherited his gifts.

Frustrated by the injustices visited upon her friends and neighbors by the military occupiers, Loup is determined to avenge her community. Aided by a handful of her fellow orphans, Loup takes on the guise of their patron saint, Santa Olivia, and sets out to deliver vigilante justice-aware that if she is caught, she could lose her freedom… and possibly her life.

I thought Kushiel’s Dart was great. It kept me engaged for 900 pages. Excellent worldbuilding. And Carey is audacious in her treatment of sexuality.

I have the other two books in the trilogy, which I’ll get around to reading at some point.