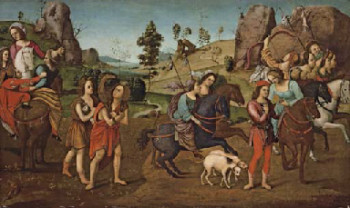 Oh. No. Not straight there. There and back again is insufficient material for epic poetry, and if you’re writing about the first great sea voyage, there had better be more than one interesting destination.

First stop: THE ISLAND OF WOMEN.

Many of Odysseus’s adventures were thinly veiled fantasies of sexual prowess, but Apollonious isn’t even playing around here. The first stop the Argonauts make is the island of Lemnos.

Which is populated entirely with women who haven’t seen a man in years.

Now, I have no fundamental problem with wish fulfillment literature. Or wish fulfillment entertainment of any kind. I may claim that I love Teen Wolf for its tightly scripted plot-lines and impressive understanding of mythology, but the washboard abs don’t hurt.

So how did the Island of Lemnos become the land with the cleanest chamber pots in the world? (I kid, I kid…) The women of the island had forgotten to worship Aphrodite. If you know anything about mythology, you know this is number two on the list of bad moves. (Number one? Sleeping with Zeus.) The goddess in turn afflicted all the women with terrible body odor. I mean bad. So terrible that none of their men would sleep with them.

Then, to add insult to injury, the men of Lemnos decided to get new, non-stinky wives by making war on Thrace and bringing home kidnapped women as war booty. The women of Lemnos in turn decide to kill every man on the island while they sleep. The pact is carried out by everyone except for their queen, Hypsipyle, who hides her father in a box and then spirits him off the island.

It may have seemed like a good idea at the time, but when the Argonauts show up, they discover there was a flaw in the plan. There are no men, and therefor no sex, and, yeah, no children.

A fun fact here about ancient gender assumptions. Our culture tends to run with the idea that sex is something women have that men want, and we have to be talked / wooed / tricked into doling out. In short, men are horny, women enjoy sex but just aren’t driven by it like men are. This is a portrayal that is seeing some drift over time, and there are counterexamples in pop culture, but for the most part that’s how the assumption operates. To the Greeks, however, it was the other way around. Women were presumed to be sex-crazed madwomen who were apt to climb onto whatever was available if they weren’t kept in check by careful male guardians. (Yes, this is something of a simplification on both sides, but as a general guideline it works.)

So let’s imagine for a moment the frenzy that ensues when a shipful of handsome, very fit young men show up on shore.

Needless to say, they stay for a while. In fact, they stay so long that Hercules, who has stayed with the ship and away from the women, calls them all together to remind them that they’re on a mission and that mission is not “repopulate Lemnos with little Argonauts”.

I want you all to pause and appreciate the self control it took me not to insert the Castle Anthrax scene in here.

After one last hurrah, the men say goodbye to the women of Lemnos, leave instructions for the many children they’ve started, and make their way onward.

All joking about male fantasies aside, there are generic reasons that Apollonius includes this tale. For one, the descendants of Jason and Hypsipyle will found a ruling dynasty and genealogies are always exciting. They must be, since they’re ubiquitous in ancient literature. But for another, Apollonius is trying to resolve two tensions here. Epics are about heroes doing epic things, and that involves lots of sex with lots of exotic women. He is mirroring the Odyssey here, after all, and Odysseus never slept alone. But once the Argonauts reach their destination, this is going to become a great romance story, and time spent with naughty sorceresses doesn’t fit into that template well. This gets it out of the way early, before we launch into a love story so great it comes with a multi-national body count.

Hmmm … They seem to have forgotten this part in the Harryhausen movie.

They Always leave out the best parts.

Now I also have to go back and see how they treated this in D’Aulaire’s Book of Greek Myths.

Speaking of which: What’s a good source? Something relatively complete but relatively readable?