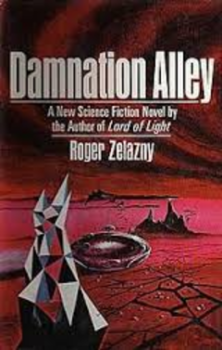 Last week, I was talking about apocalyptic novels – both Fantasy and SF – that I have on my shelves, and once again I got some very interesting and stimulating commentary. There are quite a few recommendations in those comments – along with some great ideas – so I’d advise you to have a look.

I was a bit chagrined when one of the commenters mentioned Roger Zelazny’s Damnation Alley (1969) as an example of post-apocalyptic SF. Like the other books I cited, this one is on my shelves, and as a big fan of his, I don’t know how I missed it. I’m going to talk about it, and about another of Zelazny’s novels, This Immortal (1965/66), but first, a little clarification.

One of the things we got into in the comments was exactly what we meant by “apocalypse” and “post-apocalyptic.” Now, as someone who not that long ago had a little rant about definitions, I probably should have been clearer about what I meant by those particular terms. Not that there was any name-calling or hair-pulling in last week’s comments. Just that I should have been more careful to follow my own advice.

Here’s my take on it: The existence of a precursor society is insufficient to make a story post-apocalyptic. An apocalyptic event brings about the “end of the world as we know it.” It should happen abruptly, not slowly over the course of time, as with the fall of the Roman Empire, or the disappearance of the civilization of the Caids in my own Dhulyn and Parno Novels. The new, post-apocalyptic society should be starting, effectively, from scratch. Maybe they’ve retained some “stuff” from the previous civilization, even some of the political or social ideas, but their world has changed in a way that can’t be changed back. The apocalyptic event can be natural or man-made – and I’d include magically created events in the latter category.

Now back to Zelazny. 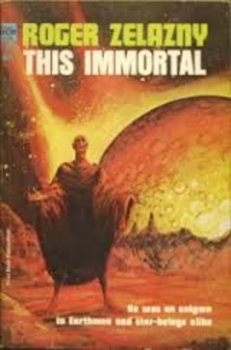 This Immortal is one of my favourite Zelazny novels. Originally a novella entitled “. . . And Call Me Conrad”, it contains one of his most often used tropes, a long-lived first person narrator with multiple pasts. It also demonstrates his “less is more” approach to explanations. The setting is definitely a post-nuclear apocalypse and civilization is being rebuilt . . . maybe.

The Earth has survived a three-day nuclear war and been discovered by a powerful race of aliens. Their interest? They’ve never been able to observe such a phenomenon and they’re curious about a race that destroyed their own planet and what they’re going to do next. That’s right. The aliens are bored. Conrad’s an old enemy of the alien race – how old not even he knows for sure, as he’s the result of one of the very early mutations following the war. He’d like the aliens to either help Earth more effectively or to stop using it as a tourist attraction and let actual rebuilding begin. One of the most innovative aspects of the novel is how Zelazny mixes myth and mutation.

Damnation Alley is, I think, a less inventive novel. It’s in the third person and I don’t think Zelazny does that as effectively as he does first person (with some notable exceptions such as Lord of Light). The world has been virtually destroyed in a nuclear was, leaving only pockets of civilization which keep in desperate contact with one another. An illness has broken out in one such pocket on the east coast. There’s a cure, but it’s on the west coast. The only way to get the needed medication across is for someone to run “Damnation Alley” the only existing road route across the continent.

Hell Tanner is a convicted felon, the “last biker on Earth.” In the best tradition of The Dirty Dozen, he’s offered a reprieve on his death sentence if he agrees to get the medicine across. I don’t think I need to tell you whether or not he makes it. Though it’s a rollicking tale, Damnation Alley is less nuanced than This Immortal in practically every way. As such, it should have made a much better movie than it did.

I should point out that there are real similarities between the two characters. Both Conrad and Hell Tanner are loners and rebels, but with rather than without cause. Tanner seems the more two-dimensional, a swaggering, insolent product of a broken home. But, in keeping with most of Zelazny’s heroes, both men also have the quality so often found in the heroes of noir detective fiction: a moral standard which, though twisted, is superior to that of the society around them.

I’ve always wondered if there wasn’t an apocalypse in the deep past of Zelazny’s JACK OF SHADOWS. How DO you get an Earth which is half technological and sunlit, and half perpetual night and magic-dominated, anyhow?

@princejvstin: Seriously, how could I have forgotten _that_ one? Jack of Shadows is one of my favourite RZ books. I think you’re right, since it’s obvious that the world did revolve at one time.

The existence of supernatural elements might indicate that this is an alternate world (and therefore an alternate apocalypse?), but it’s hard to be sure.
Thanks.

And this is the point where I admit that, despite having brought up Damnation Alley, I still haven’t actually read it. Or This Immortal, for that matter. I see some Zelazny in my not-too-distant future …

@Joe, well, my work here is done. *dusts off hands*

Black Gate » Blog Archive » Before and After

[…] Over the last few weeks I’ve been talking about apocalyptic and post-apocalyptic Fantasy and SF, and something that’s come up a couple of times in the comments is the idea of a “precursor” civilization. On the one hand, we’ve more or less agreed that the existence of one doesn’t automatically mean that the present story is post-apocalyptic. On the other hand, unless we’re writing about Neanderthals, we’re pretty much always dealing with a pre-existing civilization, aren’t we? […]