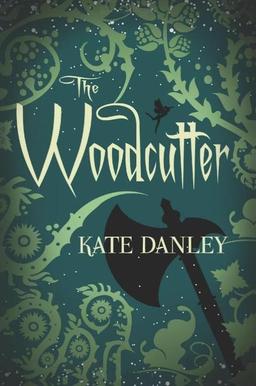 47North, Amazon’s new fantasy, SF and horror imprint, launched with considerable fanfare in October 2011, and I’ve been watching it with interest ever since. Several genre publishers have quietly cut back — or folded — over the last few years, so I’m always relieved to see the cycle of life continuing, and new imprints emerge. But just as importantly, new publishers bring new editorial ideas and a willingness to take chances, and that means a healthy crop of new authors.

Kate Danley is one of those new authors, and 47North published her debut novel a little over a year ago. The Woodcutter opens with strong fairy tale elements, and quickly takes a darker tone — with missing girls, hellhounds, and a pixie dust drug ring.

Deep within the Wood, a young woman lies dead. Not a mark on her body. No trace of her murderer. Only her chipped glass slippers hint at her identity.

The Woodcutter, keeper of the peace between the Twelve Kingdoms of Man and the Realm of the Faerie, must find the maiden’s killer before others share her fate. Guided by the wind and aided by three charmed axes won from the River God, the Woodcutter begins his hunt, searching for clues in the whispering dominions of the enchanted unknown.

But quickly he finds that one murdered maiden is not the only nefarious mystery afoot: one of Odin’s hellhounds has escaped, a sinister mansion appears where it shouldn’t, a pixie dust drug trade runs rampant, and more young girls go missing. Looming in the shadows is the malevolent, power-hungry queen, and she will stop at nothing to destroy the Twelve Kingdoms and annihilate the Royal Fae… unless the Woodcutter can outmaneuver her and save the gentle souls of the Wood.