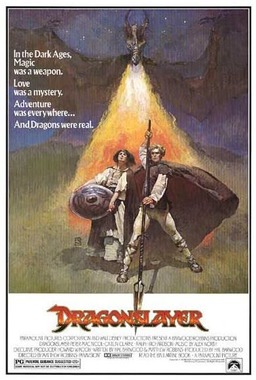 These creatures of legend have captivated our imaginations from the dawn of time. A staple of fantasy literature and culture, they embody power, majesty, and perilous danger.

Ah, old Smaug. Wrecker of dwarven homes and stealer of treasures. I can still remember the rapture with which I read this book as a child, with all Bilbo’s misadventures leading him toward an epic confrontation with this ancient wyrm.

Without a doubt, Smaug triggered a fascination with dragons that has lasted my entire life. And now with The Hobbit movies coming out, I can re-live that joy in its full splendor on the big screen.

I saw this movie as a kid, fresh off my love-affair with Smaug. Even though we see precious little of the beast until the final act, just the sounds of its breath rising from the ground and the reactions of the various characters to its presence fill the movie with a wonderful sense of anticipation.

And the final battle between wizard and dragon is pretty damned good for its time. Definitely, a diamond in the rough.

[Click on any image in this article for a larger version.] 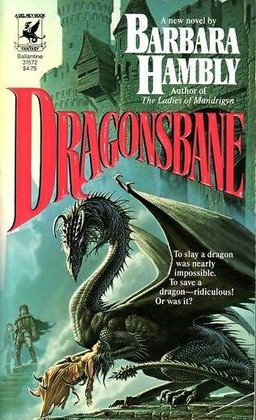 Dragonsbane is one of my favorite fantasy novels. It’s a beautiful and poignant tale about a human witch who struggles to balance love against personal freedom. Morkeleb is initially cast as the villain of this tale, until Jenny Waynest saves his life and gets to know the dragon better.

One of the best scenes is at the end when Jenny accepts an interesting offer from Morkeleb, but I won’t spoil it for you. Read this book!

According to the Internet, his real name was K’Rshinthintl. This huge green dragon seized control of the elven land of Silvanesti during the War of the Lance by mentally dominating King Lorac. In doing so, the dragon created a spooky nightmare-world for the elves.

Although Cyan doesn’t get a lot of page-time in the books, I always thought he was a total bad-ass of a dragon, both wicked and manipulative. I was so happy when he returned to give Raistlin a ride, hinting that his evil would go on.

Anomander Rake (The Malazan Book of the Fallen, Steven Erikson)

Anomander, the son of Darkness, is the leader of the nearly-immortal Tiste Andii race in Erikson’s fabulous fantasy super-saga. Not only a powerful wizard and swordsman, this character is a Soletaken (shapeshifter) who can take the form of an enormous black dragon.

Each book, I wait for the scenes with Rake because he always steals the show. One of my favorite all-time characters.

This vicious creature is the dragon Harry draws as his challenge in the Tri-Wizard Tournament. Native (obviously) to Hungary, this beast is considered the most dangerous of the dragons faced by the young wizards. Able to fly and belching fire, it is a fearsome enemy.

This battle in the movie version is one of the best scenes, in my humble opinion, because of its fast pace and aerial maneuvers.

Yes, I’m one of the millions of people who suffer from WoW (the fantasy MMORPG) addiction. My wife and I have been playing, off and on, for about eight years. Nefarian is the ultimate raid boss of Blackwing Lair.

One of my proudest in-game moments was when my guild, after many weeks of struggle, finally killed the beast. I don’t know if any raid in the years and expansions since then has been as sweet.

Although not a fantasy creature, no list of “dragons” would be complete without mentioning perhaps the greatest of them all. My personal hero and icon to the world. May he rest in peace.

I know this list isn’t exhaustive. I’m sure some of you must have favorites I didn’t mention. Let’s hear them!

First off, you are my hero for mentioning Bruce Lee.

Secondly, while I liked Cyan a lot, my favorite dragon in Dragonlance was Skie, Kitiara’s mount/companion. I have a tattoo of him on my shoulder. 🙂

Now I want to watch Dragonslayer again. Vermithrax definitely had the best dragon name ever!

Awesome of you to list Anomander, equally one of my own favorite characters and dragons.

Thanks for giving me a new one to find and read – Morkeleb the Black of Dragonsbane by Barbara Hambly.

I can back up Jason about Anomander Rake. Glad to see Rake, and Erikson, getting notice.

As for my own favorite dragons, I’d like to mention Alan Dean Foster’s Falameezar-aziz-Sulmonmee from the Spellsinger series, and John Gardner’s version of the Beowulf dragon in his novel “Grendel.”

Yes! I love that you mentioned Cyan he’s just so evil.

I’m another guy who had Smaug as a gateway drug. Falameezar is another favorite.

Smaug’s the first dragon with a name I remember.
Later favorites include Vermithrax and Silcroscuar from Glen Cook’s “Filed Teeth”.

I thought about Skie, but Cyan is just soooooooo evil. muhahaha.

Ty, I need to read the Spellsinger series.

I also started with Smaug, and I think one of the best things about The Hobbit is how it builds towards the battle with the dragon from the very beginning of the story, so that when you finally meet him he is this massive presence.

Beyond that, I’ve always enjoyed the Dracolich. The whole Cult of the Dragon thing, really.

And let’s not forget the Dragon Griaule.

My favorite fictional dragon is Draco voiced and modeled after Sean Connery in “Dragonheart”.

Then there’s Arokh from the video game Drakan order of the Flame, clearly inspired by that movie.

Also I liked Gorbash from “Flight of Dragons”.

I see brewdus beat me to it, but Icingdeath aka Ingeloakastimizilian from RA Salvatore’s wonderful The Crystal Shard is a favorite.