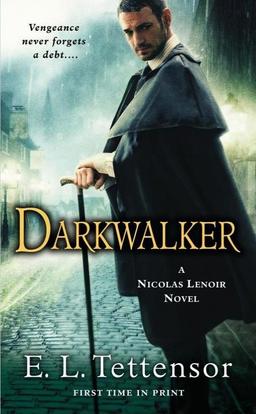 Darkwalker is the debut fantasy novel from E.L. Tettensor and it offers an intriguing mix of both the familiar and the new — just what I’m looking for, I think.

The setting is Kennian, part of the backwater Five Villages, which seems a lot like 19th-century England if you squint. Stepping into the scene is Police Inspector Nicolas Lenoir, tasked with investigating a dark mystery. Folks here for the most part scoff at the supernatural — but don’t tell the thing hunting Inspector Lenoir. This one looks like a fine mix of fantasy and mystery in a fog-shrouded Victorian-era (ish) landscape, with plenty of original touches to keep things interesting.

He used to be the best detective on the job. Until he became the hunted…

Once a legendary police inspector, Nicolas Lenoir is now a disillusioned and broken man who spends his days going through the motions and his evenings drinking away the nightmares of his past. Ten years ago, Lenoir barely escaped the grasp of the Darkwalker, a vengeful spirit who demands a terrible toll on those who have offended the dead. But the Darkwalker does not give up on his prey so easily, and Lenoir has always known his debt would come due one day.

When Lenoir is assigned to a disturbing new case, he treats the job with his usual apathy — until his best informant, a street savvy orphan, is kidnapped. Desperate to find his young friend before the worst befalls him, Lenoir will do anything catch the monster responsible for the crimes, even if it means walking willingly into the arms of his own doom…

Darkwalker: A Nicholas Lenoir Novel was published by Roc Books on Dec 3, 2013. It is 368 pages, priced at $7.99 for the paperback and for the digital edition. Read an excerpt on the Penguin website here.

[…] writes fantasy mysteries under the name E.L. Tettensor (including Darkwater, which we covered here last […]

[…] a year ago I reported on the first novel in a promising new series: Darkwalker by E.L. Tettensor. Now the second novel […]