Another month, another batch of new short stories for your reading enjoyment. First there’s the usual complement of two stories from the October issue of Curtis Ellett’s Swords and Sorcery Magazine. Then, between Beneath Ceaseless Skies #131 and #132, there are an additional seven stories. I was hoping the Autumn Heroic Fantasy Quarterly would hit the ether before I had to get this done, but no such luck.

Swords and Sorcery Magazine is straightforward. See that title? That’s pretty much what you get and I consider that a good thing. That I’m writing this while listening to Manowar’s Battle Hymns is absolutely appropriate.

Swords and Sorcery opens with James Lecky’s “Forged in Heaven, Tempered in Hell“. The story is told alternately from the perspectives of Halvari, High Priest of Baal-Rethok, and Kharchadour the God-Slayer as they face one another across the battlefield. The priest is the chief servant of the last of the demonic idiot gods and the God-Slayer is the man who’s killed all of Baal-Rethok’s co-deities.

The priest’s narrative consists mostly of begging his master to destroy the approaching warrior, while the God-Slayer’s recounts his origins. There’s nothing strikingly original about the plot, but what makes this story work is the bloody determination of Kharchadour. Also, I’m a big fan of the standalone short story that doesn’t feel like it’s missing a real beginning or ending, of which this is a great example.

Donald Jacob Uitvlugt is the author of S&S’s second story, “Right of Ultissima.” Lady Alina of Marovia is introduced smashing open the door to the Loremaster Tolek’s lab with her sword. For twenty years, she has sought vengeance for her father’s death. Before she can act, Tolek calls for the Rite of Ultissima, the privilege of speaking a last few words before death. What he says forces her to reconsider her entire life. Uitvlugt refers to his writing as haiku fiction: short and impactful. At under 1,800 words, it is pretty short. Its impact, mostly derived from some not surprising psychological insights, and unfortunately not the trappings of magic and swords, is only moderate.

So last month I was excited that Beneath Ceaseless Skies seemed to be back on the heroic fiction train. Well, that train derailed.  Issue #131, the double-sized fifth anniversary issue, has five stories — one to commemorate each year of its existence — and not a single one can be even marginally considered heroic fiction. I almost don’t care that two of them are really good.

The first, by Richard Parks, is one of the two I enjoyed most. “Cherry Blossoms on the River of Souls” is based on Japanese Buddhist beliefs about the afterlife. Young Hiroshi is obsessed with music he hears rising from a dry well outside his village. No matter how hard he tries to follow priestly advice to leave the well alone, he cannot — he must discover the source of the haunting song. His search leads him on a journey into the underworld. The story has abrupt changes and sudden appearances common to dreams, which work well to represent the shadowy afterlife world of Hiroshi’s travels. This is the second good story I’ve found from Parks and I anticipate more of the same in future.

Next up, Adam Callaway’s “Walls of Skin, Soft as Paper” falls in the middle of like and dislike. There’s little plot, so I won’t give any of it away. Instead, I’ll just tell you that it’s a story flush with strange images and unexplained oddities:

Tomai is a lampblack miner who lives in a giant termite hive called Bugspit. To get to his apartment he must crawl on his belly up a narrow tunnel.

A dwarf is warned that his pet paper squirrel will upset the residents.

We meet a woman who seems to be made of paper.

The story is sort of interesting, but it reads like an excerpt from someone else’s dream, to whom the images might have more meaning than they do for me.

“The Coffinmaker’s Love” by Alberto Yáñez is one of two stories that just didn’t satisfy anything in me. At the scene of her schoolmate’s death, Lavinia Parrish spies a girl she doesn’t recognize and realizes she is Death. 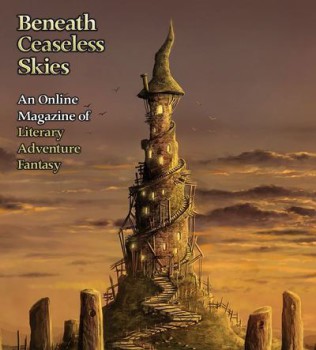 Lavinia falls instantly in love and commences a long campaign of wooing Death. As beautifully written as it is, Yáñez’ story left me cold. I find a goth-like desire to make death attractive both unpleasant and not entertaining.

Sometimes I read a story that’s vivid, well told, and built of good prose, yet I still don’t like it. Rebecca Gomez Farrell’s “Blow ‘Em Down” is one of those. It’s a steampunk retelling of the Battle of Jericho. Aside from a growing dissatisfaction with steampunk in general, I don’t quite get why there was a need to draft part of the Old Testament into the goggles-and-jodphurs brigade.

Naim Kabir’s issue-closing “On the Origin of Song” is presented in a series of letters, engravings, log entries, and testimony. In this world, magic exists as Songs. Golems, made of stone, are believed unable to possess Song. Only Men and Beasts possess the abilty to Sing. Ciallah Daroun, a golem naturalist, has come down from the hidden mesa where his people live to discover why others can Sing and his people can’t. Kabir brings the reader to the dusty streets of Sunrook and to the shores of the Dividing Sea. He allows us a glimpse of deep forest echoing with the Singing of a black and white bear and intrigues us with the tale of an island nation that Sang itself away from danger and is now lost. Good stuff.

Issue #132’s first story is a Western horror tale called “A Feast for Dust” by Gemma Files. Ever since I read Tex Arcana in Heavy Metal magazine back in the eighties, I’ve been a sucker for Weird Westerns. Sheriff Jenkins is scouring some dusty region of America, warning everyone he meets to beware the coming of Sartain Stannard Reese. Reese, seemingly risen from the dead following his lynching, is bringing down bloody judgment on everyone and Jenkins hopes

To protect the guilty from their guilt, the sinners from their sins, the weak from the consequence of their own weaknesses…

Almost no one believes him. Some kick him out of town, others just mock his foolishness. Only Marshall Willicks, in a town so small it doesn’t have a name, is willing to believe Jenkins. Together, they plan to track down Reese and put an end to his destruction. The story is a haunted examination of the weight of sin and the nature of true repentance.

In a much lighter vein, The Pyramid of Bacconyus by Caleb Wilson is about the quest of three cousins for a never-empty wine goblet. That they’re dim-witted tree-people and the eponymous pyramid’s been taken over by a Lovecraftian creature called Xiczarthotep should let you know the nature of the story. It’s one of those elusive beasts, the purportedly funny story that’s actually funny. I won’t say much, the narrative and the funny bits being too closely bound, and I don’t want to give anything away. I will ask you, though, what might a tree-person be most scared of if it isn’t fire or an axe?

I love these magazines. I may not love every story, but I am grateful to have access to them. The editors deserve recognition for the tremendous amount of work they put into getting fresh writing into print. So go, read the stories, and if you like them, let the mags and the authors know. I’ve come across dozens of good writers since I started reviewing stories. I anticipate their new stories and I look forward to seeing how they evolve.

You can find Fletcher’s November Short Story round-up here, his September summary here, and his annual summer round-up of The Best New Sword & Sorcery of the Last Twelve Months here.