I wanted to add a couple comments to John’s brief post about tie-ins. Much of the commentary revolved around Alan Dean Foster. He’s a favorite of mine and influenced my writing and career. He and King were the only two authors I took with me to college, and those battered collections are still on my shelves. I’ve corresponded with him over the years, but the only personal contact was when my wife and I shared a pizza with him at Archon (Stephanie did most of the talking, I was hopelessly tongue-tied at sharing pizza grease with a guy who wrote so many books I read to bits). I though I’d expand a little on him as well.

First, to get the curmudgeonly “back in my day” village elder/idiot stuff out of the way . . . 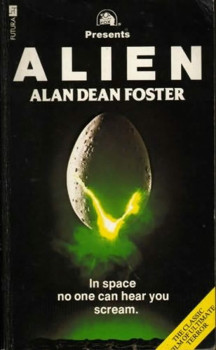 Some of the younger readers of Black Gate might have a hard time imagining how starved we were back then for more of our favorite SF movie worlds. These days, well before a major movie or game comes out, there is almost always a web presence filled with “Would You Like To Know More?” media goodness. But even for a big 20th Century Fox production like Alien, we didn’t have anything beyond a few brief TV spots, reviews, and the same press packet that went to every major paper in the country. If we wanted to know more about the movie’s world, rather than how Sigourney Weaver got along with the cat on-set, all we had to cling to were the tie-ins.

In this, we were very lucky to have a guy like Foster writing the tie-in. In most of his books, he filled in plot holes he spotted with a little business somewhere or other (like why putting the crew of the Nostromo in a single, relatively safe location and turning the rest of the ship into a vacuum wasn’t an option). He also liked to add some flavor to the movie universe, the Alien tie-in memorably begins with a description of the business of recording dreams for entertainment. Since he was usually working from a script, his tie-in also served as a form of “additional scenes” for those days before the advent of DVDs with bonus features. It was from Foster that I first experienced Ripley finding Dallas in the alien’s cocoon, with Brett turning into a facehugger egg next to him. It’s also the only place, even today I believe, where you can get the full scene of the crew getting lucky for a change and Parker almost blasting the damn thing out of an airlock. No need to tell you who sabotages that, I’m sure.

As an aside, I wonder if I’m the only person who desperately wanted the Alien, Blade Runner, and Outland worlds to all be out of the same universe.

As for Foster the writer, I’ll try to confine myself to a few brief thoughts. 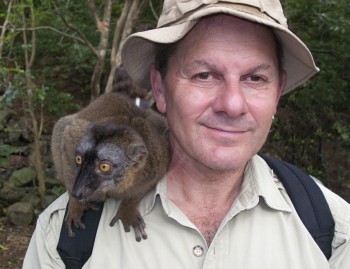 First, he’s a consumate professional. He works hard at his trade. He’s also kind, to the extent that his own time and ability allows, to wannabee authors. He gave me some of the best advice and encouragement I ever received when he told me, over email, to:

Don’t let the length fool you. There’s a lifetime of wisdom in that. He’d tried to hone everything he knew about being a successful author into as few words as possible and that was the result. What success I’ve had in the field really traces back to that succinct sentiment.

Foster the man very much comes through in his writing. He’s a guy who loves to travel, experience other cultures or just poke around in the remains of lost civilizations. A good deal of his writing mirrors that. This is just a guess, mind, but I’d say he became a writer because it gave him the flexibility (and fortunately for him, the income) to do an amount of adventure travel that you’d usually associate with a National Geographic photographer rather than an author. 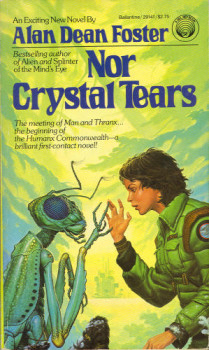 Foster the traveler makes him one of the better writers in the tradition of the old “gee-whiz” Golden Age SF. I rarely put down a Foster book where there wasn’t a location or two that I wanted to visit myself. He’s a great tour-guide to imaginary worlds, even if the trip is sometimes dangerous (like the stavanzer hunt in Icerigger). Making your reader want, desperately, to visit a location in one of your books is almost a lost art these days.

Because he’s so often been a stranger in a strange land, it’s given him a unique insight into alien points of view. I’ve enjoyed both his short fiction and novels where he camps out in a non-human head. He’s really superb at that sort of thing. All his stories feature alliances (many of the charming, some dreadful, all fascinating) between humans and non-humans. That’s the heart and soul of the Humanx Commonwealth, the future history of so many of his SF novels. I can’t depart from his non-humans without mentioning Falameezar, the Marxist Dragon from the Spellsinger books. He’s probably my favorite dragon in all of fantasy fiction and that includes old Smaug.

Fascinating worlds, curious aliens, lost artifacts, rip-roaring action… Foster is a guy who has always given me my money’s worth with his books. While I’m grateful for his tie-in work, his original fiction bibliography deserves a place with any of SF’s greats. Start with Icerigger, The Tar-Aiym Krang, or if you’re a hardcore fantasy person, Spellsinger, and go on from there.

I just went through the ISFDB and figured out I’ve read around twenty of Foster’s books. I remember liking most of them a lot, particularly Nor Crystal Tears. Maybe it’s time to dig out With Friends Like These…

Foster was my favorite author when I was a teen until I discovered Henry Kuttner, Leigh Brackett, and Robert E. Howard. Then he had company. I don’t recall a book of his I didn’t like. The Commonwealth books are my favorites of all his work. It’s a place I want to visit. Especially Midworld, Tran-ky-ky, and Moth. This post makes me want to go back and reread the whole series, but if I did, when would I sleep?

Spellsinger! I completely forgot about that series!

I was a huge Foster reader in the late ’70s and early ’80s, and kept up with all his Spellsinger novels.

One of the little touches he wrote which I always appreciated pertains to that dream material at the beginning of “Alien.” Foster also wrote the tie-in for the sequel, “Aliens,” and he started that novel as well with a dream sequence. I always liked that.

And no, you weren’t the only one who thought of all those tie-in novels/movies as possibly existing within the same universe.