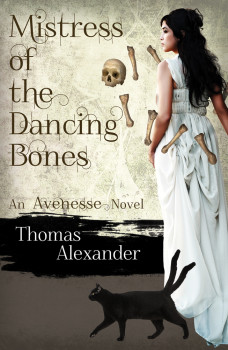 This month’s self-published book is Mistress of the Dancing Bones by Thomas Alexander.

Ashia is the daughter of a nephilim warlord, Marcel Boucher, and his human wife. This does not make her a nephilim, or even part nephilim. She is fully human until embraced by the nephilim. She is also, thanks to her mother, Dahraki, one of the dragon-blooded, and that gives her access to another kind of magic, the necromancy of the Than Khet. Unfortunately, the servant who secretly tutored her in Than Khet magic neglected to tell her that it is incompatible with becoming nephilim. Should a Than Khet be embraced as a nephilim, she would go mad as the two parts of herself warred.

When he discovers what has happened, Ashia’s father is furious. All his dreams for his daughter have come crashing down. But larger problems plague Ashia’s family. Renegade vampires are plaguing Marcel’s territory and the family’s enemies are placing the blame squarely on Marcel and his willingness to embrace barbarians rather than civilized Avensh as nephilim. In order to discover the truth, Ashia agrees to accompany the legendary nephilim witch-hunter Dusang and his demon-cat-fey ally, Tama, in tracking down the renegades and discovering the truth behind a conspiracy that involves not only renegades and political enemies, but the Deathlords themselves.

I am generally not a fan of vampire novels. I prefer my vampires as antagonists rather than as love interests. And for the love of God, sunlight better burn, or at least weaken, them, not cause them to sparkle. So I was taking a chance on this novel, but I’m glad I did.

It would be a mistake to consider the vampires the good guys. Mr. Alexander has created a dark world, where humanity’s only defense against annihilation by the Deathlords is submission to the nephilim. Admittedly, you can take a positive view of the Code Sanguine, and Marcel Boucher is something of an idealist when it comes to vampire-human relations. But the fact remains that humans are subservient in this world, their blood is demanded by their betters, and their only chance of rising is to be embraced by the nephilim themselves. As Ashia soon discovers when she travels out into the world, many of the nephilim are less concerned with their duties under the Code Sanguine than their privileges, and they are more than willing to take advantage of their position. Of course, this sort of thing is common in fiction that attempts to deal with class distinctions, though usually the upper class living off of the blood of the lower class is a little less literal.

In this world, even the best of people are morally ambiguous. Marcel Boucher may believe that the nephilim have a duty to protect the mortals, but he still takes advantage of them. And even Ashia believes that’s the way it’s supposed to be. Dusang is so focused on his mission that he ignores other injustices. And Tama can be cruel and indifferent to mortal morality. What is right and wrong in such a world isn’t always clear and Ashia’s struggles to do what is right by her family and their subjects is part of what makes this story interesting. I appreciate that Mr. Alexander made the questions difficult and that, while Ashia tries to do the right thing, she often lacks the wisdom to make a real difference. It gives her character a chance to grow through failure, which helps bring her to life.

What Ashia doesn’t lack is power. Two different types of magic are central to this story: the necromancy practiced by the Than Khet and at least some of the fey, such as Tama, and the mystere noir of the nephilim. In truth, it may be that the two are not as different as they seem. Necromancy is not the straight-out death magic it is in many stories. It can heal as well as drain life, and it can even transform. Many of the Dahraki have tattoos that let them take the form of dragons and it is an open question whether there are any real dragons or just Dahraki who can transform into ones. The mystere noir of the nephilim are more unique. Every vampire has one that lets him do something different, whether it is reading and controlling minds, astral projection, or foreknowledge. Despite the uniqueness, all forms of the mystere noir seem to be powered by blood, as might be expected for vampires.

Ashia is a novice Than Khet at the beginning of the book. She knows how to heal and give life force, but not how to take it. Her first offensive use of her ability is an adaptation of giving life, using life energy to propel sharpened bones at targets–hence the Dancing Bones of the book’s title. When she learns to drain life, she discovers she can use those bones to form connections with the targets they strike and drain them all the faster. As those targets are usually vampires that can kill her before she can drain their energy, she needs all the advantage she can get.

Most of the battles in the book are magical rather than physical and tend to be more about endurance than who can strike first. Vampires can take a lot of punishment, and since Ashia is constantly draining her enemies and healing herself and her allies, so can she. This does tend to change the dynamic and to push the tension toward the end of the battle, when everyone is on their last legs and you’re wondering when that last vampire will finally die. I’ll admit that I’m a bit conflicted about this. I often feel cheated when the fights in fiction are too short and we’re back to talking about feelings before the smoke clears. On the other hand, it’s possible to draw out combat too long, and I think sometimes the author did this, especially when the protagonists went to clear out the vampire nest. Most of the time, though, he managed the length better, and the fight felt like it was just long enough.

Aside from the fights, the storytelling does not drag. Things happen at a quick pace, the mystery is revealed step by step, and the characters and relationships develop quickly. Overall, things were more likely to happen too fast rather than too slow.

Tama is a challenging character in this book. She’s not human, or even previously human, so she has a different view of things, and acts based on attachments and intuitions that don’t always make sense. Which was doubtless what Mr. Alexander was aiming for, so I can’t deny he succeeded. Where I’m not certain he succeeded is in the relationship between Tama and Ashia. It starts out antagonistic, before Ashia eventually warms to her. But Ashia’s change of heart seems too sudden and not really justified by Tama’s actions. While the general arc of the relationship feels right, the ultimate end is not as well earned as I would have liked. Ashia and Dusang, on the other hand, felt more real. Dusang is old, a hunter who was there when the empire began, and is feeling the weariness of the long struggle against chaos. This balanced well against Ashia’s eagerness and youth, giving them a familiar master-apprentice relationship. The development of that bond was more believable. The relationship between the three of them forms the core dynamic of the book and overall works well (with the caveat mentioned above), as their conflicting motivations slowly become less important than their loyalty to one another.

The novel certainly is not immune to editing errors common in self-published books. I noticed a number of typos and small continuity errors, and points where the logic of the narrative did not flow smoothly. That said, it was still a very clean book, and all the issues were minor: I’ve seen worse from books put out by major publishers. The prose, as well, was smooth and engaging.

Mistress of the Dancing Bones is clearly the first book in a series, which is made clear as much by the cliffhanger ending as the “To be continued” at the end. But even before reaching the end, I could tell that Ashia’s story was far from over. It was simply too big to be contained in a novel of this length. And that’s a good thing. There’s more to tell, and I hope that Mr. Alexander manages to convey the next stage of Ashia’s adventure with as much verve and believability as the first stage.

Mistress of the Dancing Bones is available as an e-book on Amazon.

[…] Donald Crankshaw of Blackgate.com has given Mistress of the Dancing Bones its first professional […]

[…] I’ve been fortunate enough to get some positive reviews, most notably from Black Gate’s Donald Crankshaw. […]