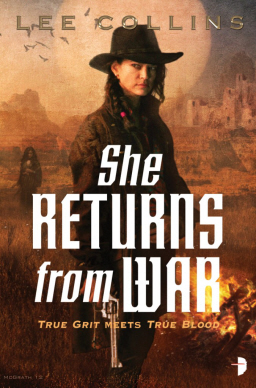 I love Angry Robot books. I don’t pay much attention to publishers when I’m at the bookstore. But when I’m home, and my purchases are stacked by my big green chair, it’s hard not to notice that half of them have the Angry Robot logo on the spine.

I think they’re just in tune with the kind of books I’m most interested in. Which is weird, because I’m not exactly sure what they are myself. But I know they involve great cover art, intriguing settings, and women in cowboy hats. This week, anyway.

She Returns From War is the sequel to the supernatural western The Dead of Winter, released last October. The tag line is True Grit Meets True Blood, which is clever. Have you noticed this burgeoning mini-trend of western-horror-fantasies, including Guy Adams’s The Good The Bad and the Infernal, Mercedes Lackey & Rosemary Edghill’s Dead Reckoning, and the Bloodlands novels of Christine Cody? Apparently it’s a thing. See? We’re paying attention.

Four years after the horrific events in Leadville, a young woman from England, Victoria Dawes, sets into motion a series of events that will lead Cora and herself out into the New Mexico desert in pursuit of Anaba, a Navajo witch bent on taking revenge for the atrocities committed against her people.

The recent coverage Angry Robot titles we’ve covered were The Crown of the Blood by Gav Thorpe, The Lives of Tao by Wesley Chu, The Bookman Histories by Lavie Tidhar, and The Corpse-Rat King, by Lee Battersby.

Westerns in general seem to be making a comeback (Deadwood didn’t necessarily start it but certainly fed it), as are shows that aren’t technically westerns but feel like them (I’m thinking of Copper and Justified). And since we are really loving mashups these days, it makes sense to see this one.

There might be something too that theory. This love of mashups seems like a new thing, but it’s definitely real.

Oh — and Justified is a great show!

If you like the concept behind The Dead of Winter…may I recommend Emma Bull’s TERRITORY. It is one of my favorite fantasy novels. The only reason I sometimes refrain from recommending it is that Emma is a long way from providing the sequel.

If you like Justified (which I adore, and which makes me incredibly homesick), check out Copper. Very similar show, except in Civil War New York City.

This book and its sequel were great. I really enjoyed them and recommend them.

Christian — funny you should mention that. I finally bought a copy of TERRITORY last week.

I’ve heard the sequel mentioned before, with the same caveat. I assume that means it ends on a cliffhanger?

Elizabeth — Really? Justified makes you homesick? I’ll have to hear about your childhood some day!

And thanks for the rec on Copper! I checked it out, and you’re right — it looks great.

> This book and its sequel were great. I really enjoyed them and recommend them.

Thanks Keith. I’m glad to hear that. I’ve been looking for a good supernatural western to start with!

[…] worth checking out all the recent Angry Robot paperbacks we’ve examined — they include She Returns From War by Lee Collins, The Crown of the Blood by Gav Thorpe, The Lives of Tao by Wesley Chu, The Bookman […]

[…] gonzo weird. There’s been no shortage of fine examples recently, including Lee Collins’ She Returns From War, Guy Adams’s Once Upon a Time in Hell, Mercedes Lackey & Rosemary Edghill’s Dead […]

[…] western kick recently. It started with the Bloodlands novels of Christine Cody, Lee Collins’s She Returns From War, and Guy Adams’s The Good The Bad and The Infernal and the sequel Once Upon a Time in Hell; […]

[…] weird. There’s been no shortage of fine examples recently, including Lee Collins’s She Returns From War, Guy Adams’s Once Upon a Time in Hell, Mercedes Lackey & Rosemary Edghill’s Dead […]