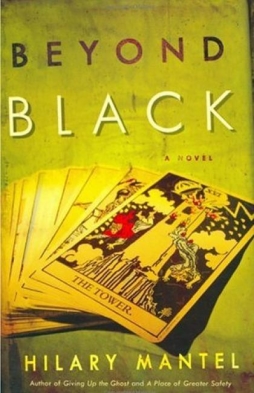 Hilary Mantel’s two novels of Tudor-era statesman Thomas Cromwell, 2009’s Wolf Hall and 2012’s Bring Up the Bodies, have both won the Man Booker prize; a third, The Mirror and the Light, will complete the trilogy, but has not yet been scheduled for publication. I want to write here not about those books, but about 2005’s Beyond Black, the last book Mantel published before embarking on the Cromwell trilogy. Her ninth novel, it was shortlisted for the Commonwealth Writers Prize and the Orange Prize. It’s a novel of the fantastic, in the broadest sense, and can be approached as fantasy, as horror, even as noir; but may be best understood simply as a thing in itself.

It’s the story of a medium, Alison Hart (born Cheetham, who changed her name for obvious PR reasons), and the business manager she hires, Colette. It follows their relationship, as well as Alison’s half-hearted attempt to recover memories of her abusive childhood. It’s also the story of their relationship with the ghosts who follow Alison, but remain invisible and imperceptible to Colette. One of these is Alison’s principal spirit guide, Morris, and you will find few characters living or dead nastier than he and his friends. Morris is one of a group of thugs from Alison’s past and understanding their background — what Alison did as a girl and what was done to her — becomes the key to the novel.

Or, at least, a key. The book’s notably plotless, in the sense of being defined by actions in sequence that necessitate one another. Things happen, characters change and are revealed, but there’s no tight narrative. The book’s held together by character, by imagery, by tone, and by the fantastic conceit at its heart: the validity of ghosts and psychic experience. To me, that makes it not just a fantasy, but one that’s worth looking at because the fantasy does something unusual — it’s part of the structure of the book in an interesting way. 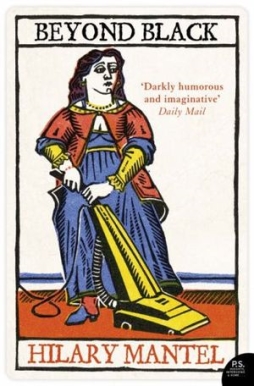 Before getting to that, it’s worth exploring the tone of the book a bit further, as that’s another element which holds the novel together. Beyond Black is one of the most relentlessly cynical, bitter books I can recall reading. It’s not so much the moments of outright violence that remain with me, though there are those, as it is the total lack of uncomplicated friendship or love. Every relationship in the book is etched in acid. Everyone’s insistently aware of the shortcomings of everyone else: mother and daughter have no more tenderness than husband and wife. The social mask of camaraderie between professional colleagues is about as close as the book gets to depicting people taking pleasure in each other’s company. The result is a bleakness that is, literally, beyond black; it’s less ominous or even despairing than it is resigned. The worst has happened, the bodies are buried, and now all you can do is talk with the ghosts of the dead and the clueless.

Which is not to say that the book doesn’t touch on noirish (or beyond noirish) aspects — even if, as the title promises, it ultimately goes beyond them. Alison’s childhood is defined by crime and violence, and the voices of Morris and his gang are threatening and amoral. More than that, Mantel depicts the suburban England through which Alison and Colette travel as a Ballardian wasteland. History’s been junked. Urban spaces have run wild.

Here’s an example, from the first pages of the book:

A sea-green sky: lamps blossoming white. This is marginal land: fields of strung wire, of treadless tyres in ditches, fridges dead on their backs, and starving ponies cropping the mud. It is a landscape running with outcasts and escapees, with Afghans, Turks and Kurds: with scapegoats, scarred with bottle and burn marks, limping from the cities with broken ribs. The life forms here are rejects, or anamolies: the cats tipped from speeding cars, and the Heathrow sheep, their fleece clotted with the stench of aviation fuel.

Beside her, in profile against the fogged window, the driver’s face is set. In the back seat, something dead stirs, and begins to grunt and breathe. The car flees across the junctions, and the space the road encloses is the space inside her: the arena of combat, the wasteland, the place of civil strife behind her ribs. A heart beats, taillights wink. Dim lights shine from tower blocks, from passing helicopters, from fixed stars. Night closes in on the perjured ministers and burnt-out pedophiles, on the unloved viaducts and graffitied bridges, on ditches beneath mouldering hedgerows and railings never warmed by human touch. 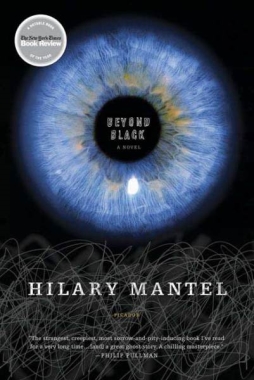 It’s a dead landscape, in which ghosts and demons move; so naturally a spiritualist is needed to make sense of it all. But then the spiritualist herself is not all of one mind, as we see in the reference to civil strife. The thing stirring in the back seat: an image of unrest in the back of the mind, surely. The medium is not merely a woman who speaks to ghosts, but a woman who is haunted by them. Her ghosts are her past, buried but still active.

The absence of history in this landscape is a myth. Alison and Colette buy a house in the suburbs, but the brand-spanking-new housing development is undermined by threats buried below the surface. These things underfoot, these things suppressed and repressed, must emerge in some way. Alison’s mediumship is a symbol for the repressed, a symbol of the past forcing its way into the future: the personal past of miserable childhoods and sad infidelities, if not the imagined past of distant kings and queens.

In fact, the historical implications of a true medium are deliberately underplayed; this isn’t a book about the days of yore, or about the recovery of centuries gone by. Alison herself notes a few reasons why long-dead ghosts rarely come to her, so there is some logic to that aspect of the fantastic world. But in general, Alison’s uninterested in the big picture. She knows what she has to know to live her life. She seems to be more than a little scared about the rest, about what the afterlife is actually like. There’s a reason for that; her past is in there, somewhere, and she spends most of the book choosing not to revisit it. Her gift is a part of the furniture of her life. 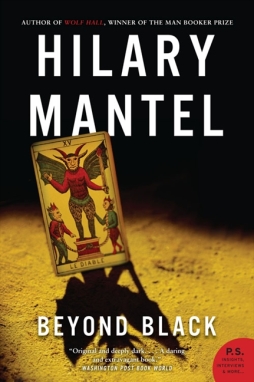 So while there’s no doubt that Alison’s psychic power is real, there’s also no interest in exploring the ramifications; the book avoids ‘world-building.’ The fantastic is a vital part of the book, but not the focus. Mantel avoids giving Alison anything more than platitudes when it comes to her explanations of the afterlife. Again, Alison’s not interested. It’s not so much the fact that she’s not an abstract thinker as the fact that the afterlife isn’t abstract. It’s a part of bloody-minded reality, something to be dealt with. The implications are staggering, but Alison’s precisely the last person who’ll investigate them. So the novel’s able to maintain its focus. The fantastic, or uncanny, is not so much kept under control as it is restrained to the necessarily relevant: the exploration of Alison’s point of the book and the way her gift brings out her character is a logical function of what that character is in the first place. So the fantasy elements are perfectly fused with the conception of character.

It’s worth pointing out that Alison’s character is both broadly and deeply conceived. She’s the heart of the book, complex and well-drawn enough to anchor over three hundred and fifty pages of text. Middle-aged, she’s both wistful and pragmatic. She’s got a well-crafted stage persona, but needs a woman like Colette to handle the details of running a business. She can deal with ghosts, but is reluctant to probe her own traumas. Even as those things clearly come to seem the same.

Alison’s community is also nicely-drawn. She’s part of an informal professional network of psychics, who apparently all have genuine talents. It’s almost but not entirely unlike urban fantasy; there’s no crime-fighting, but the paranormal’s an accepted part of everyday life, not a driver of plot so much as a facilitator of story that is not itself explored. Tonally, the genre it’s closer to is noir, if a gender-aware noir, but then you could also say that in some aspects it weirdly calls to mind super-heroes: Alison wanders urban space, giving peace of mind to the distraught, and her power is fundamentally an extension of who she is (as every great super-hero has a power that is indivisible from their personality and identity). But, really, this is not a genre book in any meaningful sense: it avoids building a well-made plot, avoids suspense, avoids traditional or inherited structures. It develops along the lines of its own concerns, and those concerns mainly have to do with its main character. 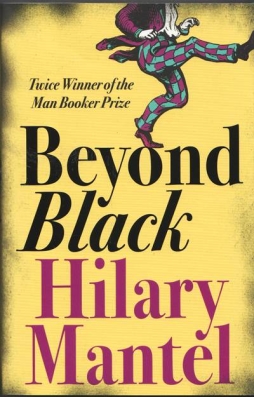 Alison’s ability to commune with ghosts is what drives the novel, in one way or another. It’s what draws Colette to her, setting up the relationship that dominates the book. And it defines her life, which seems to me to be the book’s core subject. So in that way, the book seems to me to be doing something unusual. It’s definitely a fantasy, but with a distinctive way of approaching the fantastic, the uncanny, and the numinous. The fantastic aspect of the book both defines and illuminates character, while also serving as a symbol that crystallises aspects of everyday experience: how we deal with the past, most notably. Still, it’s about more than the everyday. It’s a way, I think, of dealing with something beyond the mundane; something that has the quality of the visionary.

It is impossible to look at a book about spiritualists and not see the spiritualist as a metaphorical stand-in for the writer, who must summon voices and arbitrate among ghostly characters audible only to themselves. Perhaps, then, it’s best to give Mantel the last word on this:

The mystery that lies behind the visible world is certainly the central preoccupation in Beyond Black, which is where I take on the subject explicitly – is the world as we see it, or are there competing and overlapping realities? I am a fan of the latter concept, but I have to phrase this carefully so as not to sound mad. I feel as if I’m conscious all the time of different realities that are forming and reforming and humming about one’s head, and this restless and quite frightening idea creeps into [her 1989 novel] Fludd but absolutely suffuses ‘Beyond Black’.

In virtually all my books there’s a slight edge of the supernatural, and a preoccupation with what is hidden, what may be in the locked room. The locked room may be part of the psyche; it may be the part of the imagination that one doesn’t dare enter.