After a pretty full first day at Gen Con 2013, things were really just getting started for me.

At about 5:00 pm, I headed a couple of blocks over to the Indiana Repertory Theater for a Dungeons & Dragons press conference I’d been invited to. Following the press conference was to be the big Dungeons & Dragons party, which was celebrating not only the launch of The Sundering … but also the 25th anniversary of Drizzt Do’urden. (We even had cake!)

So, let’s lay it out here: Dungeons & Dragons is going through some massive shake-ups. Last year, I liveblogged from their keynote address, where the Powers-That-Be formally announced their intention to tie the D&D Next transformation of the rules in with a Forgotten Realms storyline called The Sundering.

This year, we got a lot more information about exactly what this will look like on the implementation. Plus … there was an open bar and a murder! But first, the gaming news.

In case you’ve missed it, The Sundering is now under way. The first novel in the series, R.A. Salvatore’s The Companions (Amazon, B&N), is now available, with new books slated every two months over the course of the next year, to relate the events that shake up the Forgotten Realms.

Here’s my confession: despite having played Dungeons & Dragons for over twenty years, I have never read a Forgotten Realms novel. I devoured Dragonlance novels in high school, and there’s still a part of me that considers the Legends trilogy to be a work of high literary excellence, but I just never really felt drawn to the Realms in the same way. 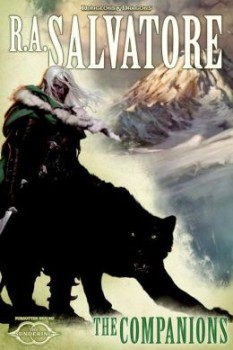 That ended last week, when I picked up my (digital) copy of The Companions. I don’t know if this is the most accessible story to begin reading about the Forgotten Realms. Right out of the gate, there are some curveballs, narrative time jumps, and dead characters talking to each other which are a bit disconcerting to sort out. If you stick with it, these things do get explained in fairly short order and make sense; but there are a couple of chapters where I was just genuinely confused about what was going on. Once it clicked into place, however, the novel began to fly!

It’s been a busy week, so I’m not done with the book yet, but I’m definitely planning to spend some of my precious reading time on this series of books. If you’re already familiar with the characters and the world, then I definitely recommend it.

Though I’m sure much of the plot is mapped out, the Dungeons & Dragons folks are leaving the resolution open enough that the gaming community can be involved in influencing the tide of events in Faerun. Through their D&D Encounters events and a new Arena of War game app (due out this fall for both iOS & Android), there will be ways of recording the outcome of key events and having them affect the outcome of The Sundering storyline, as it is reflected in the novels and, ultimately, in the setting and campaign materials available for D&D Next.

The first of the gaming supplements directly related to The Sundering is Murder in Baldur’s Gate (Amazon, B&N), written so that it can be used with 3rd edition, 4th edition, or D&D Next rules. The supplement includes a 64-page setting book for the city of Baldur’s Gate, as well as a 32-page adventure book that puts characters levels 1 – 3 right in the heart of the action. This will be followed up by the November 19 release of Legacy of the Crystal Shard (Amazon, B&N).

Those wanting to be involved can track their gaming experiences through The Sundering Adventurer’s Chronicle at DnDSundering.com. This tool looks like it’s still in the process of ramping up a bit, but it’ll be interesting to see what options are available over the next year or so.

As for D&D Next itself, the developers have largely learned from the playtesting what their fans consider most central to Dungeons & Dragons, so they know what they have to keep in place. They were careful to avoid announcing any specific release dates for the first official D&D Next sets of rules, but they are entering in the next couple of months the last rounds of public playtesting, which means they’ll turn their attention to finalizing the rules and getting books out sometime in the next year or so. I would be highly surprised if we don’t have the core set of D&D Next books at Gen Con 2014.

Drifting away a bit from the events of The Sundering, there is some news on the board game front. Over the last several years, Wizards of the Coast has released some great Dungeons & Dragons brand board games like Conquest of Nerath, Lords of Waterdeep, and Dungeon, as well as their miniature skirmish line Dungeon Command, which ties into their D&D Adventure System line of games, including the Legend of Drizzt board game. Though I didn’t hear anything about new Dungeon Command factions or new Adventure System games, there is some great news related to one of my favorite games, Lords of Waterdeep:

Honestly, I had a nice long conversation with Mike Mearls, head of Dungeons & Dragons R&D department, and it wasn’t until a couple of days later that I realized I missed the boat on asking him about their plans for future board games. Aside from mentioning the Lords of Waterdeep app, they didn’t discuss board games much during the press event, and I’m sure their focus is elsewhere with the D&D Next playtesting being their top priority, but I imagine that we’ll continue to see some high quality games coming from them. 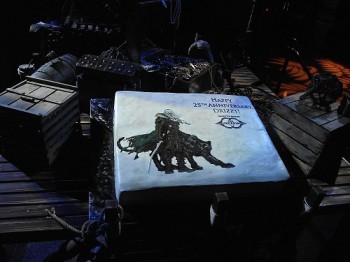 Back to the Open Bar … and Murder … and Cake

Did I mention it was Drizzt’s 25th birthday? Unfortunately, the celebratory evening was marred by a murder most foul. If you follow the @BlackGateDotCom Twitter feed (or my own @azjauthor feed), you may have noticed some discussion of it last Thursday night. The humble dwarf Yeslick Orothair was murdered, and a call went up to all in attendance to investigate. Fortunately, some augury must have foretold the murder, because there was a worksheet within our press kits and swag bag to help us sift through the culprits. Villains were apprehended, and the results of their interrogations posted with their wanted posters. It was up to us to figure out who was associated with which of the secret organizations involved.

This did not stop the revelry, of course. The authors of The Sundering books signed copies, while the Bazaar was set up to sell their wares. I’m pretty sure R.A. Salvatore mumbled a potion-fueled “I love you, man” as he walked past me, but I could be mistaken … or wishful thinking. Salvatore did cut Drizzt’s cake.

Did I mention there was an open bar?

Ultimately, I’m afraid that your humble correspondent accused an innocent weapon merchant of the murder. Fortunately, the culprit was located by others more attentive to detail than I and one of those who correctly identified him was rewarded with a sword, demonstrating Istevar’s favor.

But, hey, at least I got a piece of Drizzt’s birthday cake (and a swag bag).

One last thing occurs to me of note: Kre-o (the Hasbro LEGO competitor) is beginning a line of Dungeons & Dragons sets. It will feature a Drizzt Do’Urden figure, as well as some orcs, including the very cool Orc Wardrummer. They were giving out the following poster to promote it … which now hangs in my son’s room, making me feel far cooler as a Dad than I actually am. 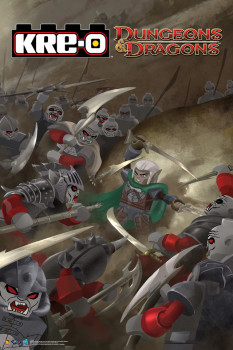 Cool stuff! Thanks for these updates Mr. Jones.

I wish more attention was given to Salvatore. I think his books are often viewed as somewhat juvenile (i.e. just for kids). I know that he purposely writes for a younger audience (no cussing or sex). But I think he’s a fine fantasy writer. His battle scenes really pop! And I think he does a good job with character development as well.

I have been reading Salvatore for ten years now. For a long time Drizzt fans this was the boom they have been waiting for. Bob has listed his disappointments with how Wizards handled the spellplague but now they are trying to take it all back and are working with the authors.

That poster is awesome! That is one of my favorite Lockwood pieces.

[…] some pics. And of course there are Andrew Zimmerman Jones’s write-ups from earlier this month right here on the Black Gate […]

[…] Sundering” (also the name of the book series) was impacting the Forgotten Realms world. The 2013 GenCon keynote coincided with the Drizzt Do’Urden’s 25th birthday, and also with the release of the […]