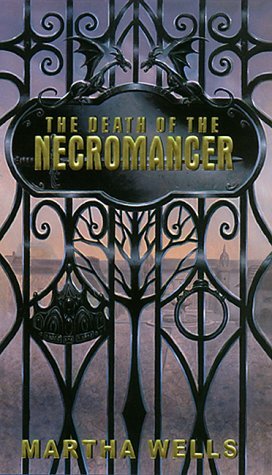 Black Gate is very proud to present the final installment of Martha Wells’s Nebula Award-nominated novel, The Death of the Necromancer, presented complete online for the first time. In his SF Site review Wayne MacLaurin wrote:

The setting is a gaslit European continent that has familiar sounding names (Vienne, Lodun) and comes complete with steam engines and revolvers. But magic works and sorcerers walk the streets of the cities, have a great university and hold positions of power at the courts… The plot revolves around Nicholas Valiarde, a disgraced nobleman, consumed with the desire to revenge the wrongful death of his godfather. He also happens to be the greatest thief in all of Ile-Rien (a helpful talent which, I am sure you can see, would significantly help with those late night prowls around your arch-enemy’s estate)…

Valiarde’s revenge starts getting interrupted by a series of increasingly bizarre, unexplainable events. Somebody, or something, with significant magical ability begins to oppose him. More chilling is the obvious taint of necromancy — and necromancy is an art that has been outlawed for centuries…

The Death of the Necromancer is a fabulous read and earns my vote for “Most Exciting New Book of the Summer!”

Part Five includes Chapters Nineteen through Twenty-Two. It is offered at no cost.