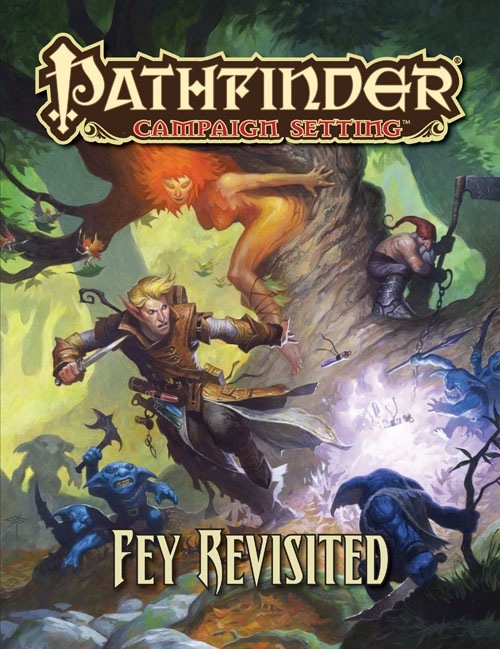 Magic permeates fantasy settings, but even in these realms, there is a type of creature that typically embodies these magical forces in a more fundamental way than anything else. I am speaking of the ubiquitous fey, creatures who are often depicted as being born of magic .

Now many of the major fey races have been collected together into the Pathfinder Campaign Setting supplement Fey Revisited (Paizo, Amazon). The fey creatures in Pathfinder are natives to the First World, which was the gods’ first draft of reality, and as such they have only a tenuous grasp on mortality … and, often, on morality, for that matter.

The timing on this supplement is extremely good for me personally, since I’m running a campaign that is set in the Pathfinder world of Golarion, in Nirmathas. The forest in Nirmathas, the Southern Fangwood, currently has a situation going on where there’s a fungal disease that infects only fey. So having a sourcebook that outlines various different types of fey is extremely useful.

The fey races detailed in this volume are:

These are pretty classic fey races. I believe that all of them are individually covered in entries in the normal line of Pathfinder Bestiary books, but this book goes beyond that, giving them each a 5-page spread that outlines that breed’s specific traits:

So the book is a great sourcebook for finding out about the fey, and anyone wanting to incorporate the fey into their campaign should probably get this book. There are a couple of drawbacks, though, which are worth mentioning.

Also, there’s very little information on the fey homeland of the “First World” and how it relates to Golarion, and whether there’s any way to access it. This information is only hinted at in the two-page introduction to the book. For example, the book discusses “The Eldest,” the powerful leaders of the First World, and how these replace the typical “Seelie” and “Unseelie” courts, but there’s no detail beyond that. As such, I would classify this more as a detailed Bestiary supplement rather than an expansion of the campaign setting. The Eldest are briefly discussed in the Religion chapter of The Inner Sea World Guide (Paizo, Amazon), and I was hoping that Fey Revisited would provide a little more on them, but there’s not much.

All of that having been said, there’s only so much you can expect from a 64-page campaign supplement, and viewed in that light, Fey Revisited definitely delivers in spades. Those who are interested in consorting with the creatures of the First World, there’s no way you’ll want to do it without this resource.

Disclaimer: Review copy of the book was provided by the publisher.

[…] releases at the Pathfinder Booth at Gencon last month. We also recently covered Ultimate Campaign, Fey Revisited, and Chronicles of the […]