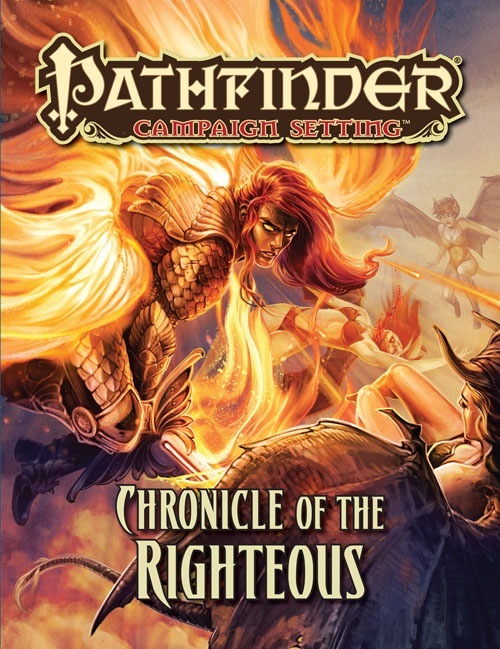 If you’re one of the generation of gamers who cut their teeth on 20-sided dice, you know that the mythology around the Dungeons & Dragons fantasy settings often hinge upon the machinations of deities, at times capricious and petty, at times aloof, at times all too ready to lend a not-particularly-helpful hand. (Yes, I’m looking at you, Fizban.)

The gods also play a central role in the D&D-stepchild game of Pathfinder RPG, produced by Paizo Publishing. Their setting of Golarion puts an interesting twist on the gods, by featuring a number of deities that were once mortals who ascended to godhood. The gods of Golarion are controversial and the cause of much conflict, with the desert nation of Rahadoum going so far as to outlaw the worship of any deity under penalty of death. (The atheism of Rahadoum is a central theme in James L. Sutter’s fantastic novel, Pathfinder Tales: Death’s Heretic.)

But the gods are not the only otherworldly beings that have designs on Golarion. In their recent Pathfinder Campaign Settings release, Chronicles of the Righteous (Amazon, Paizo), Paizo dives more deeply into the Empyreal Lords. These are supernatural beings from other realms who have ascended to prominence in the Outer Planes, becoming almost like lesser gods who focus on their domains of interest and gather smaller groups of dedicated followers and servants to further their interests on Golarion.

Empyreal Lords have more limited areas of interest than gods. Some are paragon angels, agathions, archons, and azatas whose exceptional deeds have led them to become exalted even among their own kind; while others have directly manifested from divine miracles or exceptional human souls.

The book’s narrative is built around the ancient artifact, Chronicle of the Righteous, which is a tome that detailed the activities of all beings of the Outer Planes. Tabris, the angel who wrote the Chronicle, went mad doing so and has not been seen since, having fallen to neutral status and, refusing to atone for his fall, now lives in the city of Axis, which is its own neutral realm.

The book contains detailed entries on 36 of the Empyreal Lords, the big wigs of the good Outer Planes, as well as the powers that they offer to disciples through the Celestial Obedience feat. In addition, there is a one-page call-out sheet of an additional 16 “Lesser Empyreal Lords” as well. The front of the book contains a list of 54 Lords of the Empyrean, so there are 2 Lords that appear to be unaccounted for, but it lists the favored weapons and domains for each of the Lords, so that Clerics (and others) can choose the Empyreal Lords as their object of worship.

In addition to the Celestial Obedience feat, granting worshippers boons from the Empyreal Lord they worship, there are other details on playing a member of a mystery cult (as the Lords’ churches are called), including:

Overall, this new twist on otherworldly good beings provides a lot of opportunities to mix things up. Long-time players probably have a feel for the way gods work within Pathfinder, but these beings are just different enough to throw a bit of a curveball at players who think they’ve seen it all. Rather than massive churches devoted to a deity, these smaller mystery cults are used to working behind the scenes. Since the players know little about the Empyreal Lords, there may be genuine concern over whether their servants are friend or foe, in a way that you don’t normally get with the formal religious church, where you often know where they stand.

So if you’re looking for something a little different, but still touching on the otherworldly feel we’ve come to expect from fantasy RPGs, then I definitely suggest taking a look at Chronicles of the Righteous and incorporating some elements from it into your game.

Disclaimer: Review copy of the book was provided by the publisher.

[…] Interested in the Pathfinder game instead? Read all about the latest releases at the Pathfinder Booth at Gencon last month. We also recently covered Ultimate Campaign, Fey Revisited, and Chronicles of the Righteous. […]

[…] Pathfinder RPG: Chronicles of the Righteous […]