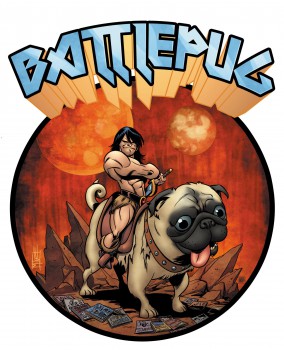 Battlepug is a weekly web-comic that follows the adventures a big, dumb beast. And his dog. Writer/artist Mike Norton starts off the story as a fairly standard Conan-style barbarian origin piece. You know the spiel … innocent boy orphaned after his village is destroyed, forced into a life of slavery that builds both his muscles and his hunger for revenge. But there are signs along the way that remind us this won’t be the usual dreary rip-off. First of all, the terror that murders our hero’s village is pretty much the cutest thing you’ll see (until the arrival of the titular pug, anyway). Second, the Northern Elves who enslave the boy look all-too-familiar (as does their grim and merciless king). By the time the giant pug on the cover appeared in the story (which is twenty pages, or five months, along), I was already sold on the premise.

Writing a cliffhanger serial is difficult enough. Writing a cliffhanger serial where every single page is a cliffhanger, without ever seeming forced, is the work of a master storyteller. This story never gets tedious, even when it breaks for the narrator offering her own commentary (of course, it helps that the narrator is naked and covered in tattoos, and the audience is a pair of talking puppies). The strip’s been running for over two years and still continues to pull left turns with no end in sight. All the common tropes, the princess in need of rescue, the obligatory big bad, the ruthless warrior woman, are given goofy interpretations, with a few surprise cameos (like an unexpected couple who run a ferry service). As a fan of fantasy (especially sword and sorcery), it was nice to see a story that was paradoxically lampooning, while at the same time honoring, all those standard plot elements. Basically, this story works even as it’s making fun of everything else in the genre.

You can catch a new page of Battlepug every Monday at the website. It’s totally free, which means you’ve got no excuse not to check it out. But if you feel like supporting the artist (bandwidth isn’t free, people), the first bundle of pages have been collected into a traditional print collection (with volume two on its way in August). There’s also a pair of Battlepug t-shirts available (classic style or “Thunderpug”).

And if none of this has convinced you, I’ll just close my post with two words: ghost manatee.

Michael Penkas writes in a variety of genres, is the current website editor for Black Gate, maintains a blog, and has recently published a collection of his early published stories, Dead Boys (available through Amazon and Smashwords).

Thanks, now I’m wasting several hours reading ALL the back episodes. What a blast!