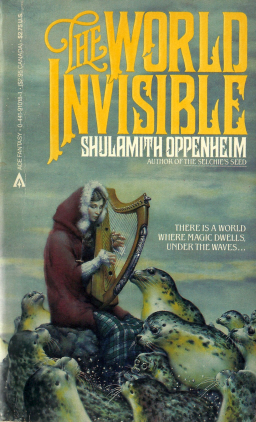 I just found a dusty plastic bag stuffed full of paperbacks tucked in a corner of my living room. Hidden behind another pile of books, of course. Near as I can figure, I bought them at Capricon back in February (possibly at the same time as Peter Haining’s Vampire anthology.) Man, I need a better filing system.

There’s some good stuff in it, though. If I did indeed buy them, and the bag didn’t just spontaneously materialize from the ether, then I clearly have great taste. Or maybe I just patronize fabulous booksellers. Whatever the case, the bag was filled with vintage paperbacks by Norman Spinrad, Robert Silverberg, Jerry Sohl, and Lloyd Arthur Eshbach. The most intriguing item, however, was a slender Ace paperback from 1984, The World Invisible by Shulamith Oppenheim.

It lies in forest shadows beneath the hills, and below the waves that pound so fiercely on Scotland’s shores.

It is a world of beauty and magic, of fey creatures wondrous beyond imagination.

Do not cross its boundaries or consort with its denizens. Or you will never be content with the human world again…

Okay, I have no idea who Shulamith Oppenheim is. According to some hasty research at her website, she’s a children’s writer with 14 books to her credit, including one about Albert Einstein, who was best man at her wedding (!). The World Invisible appears to be her only adult fantasy. It was reprinted in 2007 by White River Press, with the world’s most boring cover (what is that? An island? A fog machine? It’s like a travel book for blind people). Seriously, if you want to read it, the Ace version with the Don Maitz cover is the one to get (click on the image at right for a full-sized version).

The World Invisible was published by Ace Books in 1984. It is 198 pages in paperback, with an original price of $2.75. I figure I paid around two bucks for my copy. It is currently in print in both paperback and digital formats from White River Press.