Flesh and Blood (1985) is neither high art nor Paul Verhoeven’s best film, but it does contain flashes of genuine magic and an exceptional eye for the grime and grit of Medieval Italy. It also carries its fair share of star power thanks to the presence of Rutger Hauer, Verhoeven’s frequent co-conspirator, as mercenary soldier Martin.

The plot in a nutshell: Martin and his band of trouble-making friends are part of Hawkwood’s Army (though which of Hawkwood’s many armies is allowably unclear), but soon enough Hawkwood turns on his scruffy, ill-mannered war-hounds, stripping them of their pay and their pickings. Demoralized but determined, Martin and company make a break for the countryside, where they kidnap Princess Agnes (Jennifer Jason Leigh), then hole themselves up in a rural castle in which Agnes teaches her captors, as best she can, the fine arts of civilized behavior. But of course Hawkwood comes calling, paid now to recapture the princess. The clash that follows pits swords against fumbling attempts at science, with bubonic plague waiting in the wings.

Flesh and Blood proves to be a trifle cartoonish at times, a la Robocop, but one thing Verhoeven never lacks is energy. He’s a naughty schoolboy, yes, and at times his fondness for splatter, gore, and, well, flesh, threatens to undermine the film’s highbrow, philosophical script, but he’s also a craftsman with the heart of an animator –– both the camera and its subjects are in almost constant motion –– and provided you’ve got a strong stomach, Flesh and Blood provides ample period entertainment and many a fine battle. 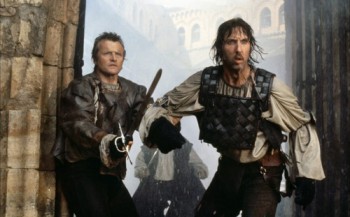 Gerard Soeteman’s screenplay smartly pins itself to historical figure John Hawkwood, an Englishman of common birth who rose to be the most feared condottiero (mercenary captain) of his day.

He achieved his greatest fame in Italy, but also plied his double-crossing trade in France. Had the Hundred Years’ War not already been raging, one suspects he might have started it himself, simply for his own amusement; he fought both for and against various popes, mostly via Avignon, that period’s on-again, off-again seat of the Holy See.

Largely a forgotten (or at least ignored) figure in the history books, Hawkwood’s name still catches its share of the popular imagination. In 2006, Fairport Convention even released a song, “Hawkwood’s Army.” Penned by Pete Scrowther, the first half of the chorus reads:

We ride with Hawkwood’s army, hear the churchbells ring.
With fire and sword we swarm abroad, and deadly is our sting.

Hauer’s Martin is the lynchpin of the story, the axis around which Verhoeven and Soeteman negotiate 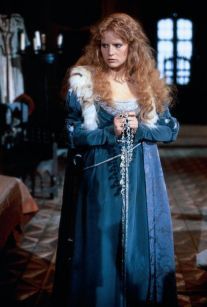 a tale not just of mercenary hijinks, but of civilization’s slow road to progress. The various characters vying for supremacy in Flesh and Blood represent both the Medieval world in which the story is set and the Renaissance to come.

Martin becomes leader of his troupe precisely because he is willing to change, to adapt, to imagine higher ideals both for his material sense and for his ambitions. That he eventually loses to Stephen, a young scholar bent on recapturing Agnes, is not so much a measure of his faults as it is a sign of the times.

Martin is clever, ruthless, and capable, but his cronies, especially, are a product of their dying era; in a film where anyone shown to be inflexible is doomed to a painful death, how long can Martin himself possibly hang on? Soeteman has clearly read his Darwin; Flesh & Blood makes survival of the fittest a dramatic imperative.

Verhoeven’s extraordinary fascination with naked women (and the female breast in particular) has never been clearer. The film’s female characters are generally quite well drawn, specific and clearly motivated (for this, let’s thank Soeteman), but the next bare chest is never far afield.

An accurate depiction of the times? Likely not. As for the men, Verhoeven provides bare chests and naked buttocks; if you’re looking for more, do check out Verhoeven’s best outing, Keetje Tippel, where full frontal male nudity is used to frightening (and artistic) effect. 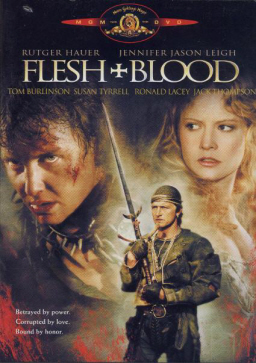 The cloud that hangs over Flesh and Blood is its rape scene. I would say “infamous” rape scene, because it ought to be. It’s protracted, complex, and disturbing largely because Agnes’s victimhood is forcefully called into question.

Newly captured by Martin’s band but already bent on survival, Agnes realizes that she might have something to gain by pretending to enjoy herself during the assault. She proceeds to do exactly that––and then, depending perhaps on one’s reading of the film, she goes well beyond pretending.

Had Flesh and Blood been a) the work of an American director, b) set closer to the present day, or c) more of a popular success upon its release, this scene would have been a critical flashpoint, a bone of contention for years to come. Consider Sam Peckinpah’s widely castigated Straw Dogs (1971), which depicts much the same thing, albeit in a contemporary Cornish country home.

That film, starring Dustin Hoffman, sparked controversies that rage still in cineastic circles across the globe. Was Peckinpah a virulent misogynist, or was he merely holding up mirrors to what civilized society would rather not see?

If you can navigate or perhaps simply bull past this scene, and if you can scoop your jaw off the floor following a brace of truly preposterous lightning strikes, the film has definite rewards. As a drama of shifting loyalties and betrayals, the film ranks with John Huston’s The Treasure of the Sierra Madre (1948). As a sword-slashing adventure, complete with fanciful siege engines and fully functional castles, it’s a visual, detailed feast. 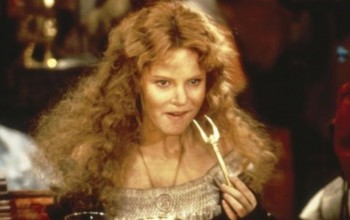 Watch for American actors Bruno Kirby, best known for When Harry Met Sally (1989) and Good Morning, Vietnam (1987), alongside Brion James, who had recently appeared with Hauer in Blade Runner (1981––he’s the replicant interviewed to deadly effect in that film’s prologue).

Journeyman pro Jack Thompson plays Hawkwood; you can find Mr. Thompson in everything from Breaker Morant (1980) to Attack of the Clones (2002), also this year’s Baz Luhrmann outing, The Great Gatsby.

Flesh and Blood: not for the faint of heart, no––here there be dragons, and not of the easier to deal with, literal kind––but a film to be reckoned with, and every inch an adventure.

Noting the “10 years in the making!” on the cover the VHS we’d just watched, a friend said, “Perhaps they should have taken more time.”

Not that the film isn’t without its charm. Hauer does a good job in it–better than in a lot of the odd movies he’s done. And seeing one of Leonardo’s war machines was pretty cool.

I never would’ve pictured Rutger Hauer in a historical until after I saw this.

Now I just wish someone would hurry up and do a DVD release of Hearts and Armour, another early 1980s European-produced historical.

Joe – Hauer did several historicals before making the jump to U.S. stardom. SOLDIER OF ORANGE is one, although that’s not too far back in time, but KEETJE TIPPEL is costume drama for sure.

Also: My other favorite Verhoeven film is THE FOURTH MAN, well worth tracking down. (It also wins my award for Best Trailer Ever, hands down.) As for poor Jennifer Jason Leigh, what exactly did Hauer have against her? Anyone remember what happens at about the two-thirds point of the other film in which they appeared together, THE HITCHER?

Ouch. I remember this film mainly for being a good indicator of Verhoeven’s potential, especially in terms of its visual flair, but for some reason thought he’d shot it entirely in the States – giving him what I now realise were a lot of undeserved brownie points for utilising one landscape to represent another (ie, having a Kansas cornfield stand in for Italy, much as Canada stands in for Scandinvaia in ‘The Thirteenth Warrior’).
Oh well.

You’ve handled well and thoughtfully a film I don’t think I could pick back up with foot-long tongs.

My college gaming buddies and I had a semi-regular movie night, and somebody rented this film. I recall that several of us had sufficiently horrified reactions to the rape scene that we paused the videotape and discussed whether to continue at all. My main objection was not that a rape scene existed in a historical film–history includes rape–but that the director and screenwriter were obviously getting off on it, and had written the scene for their personal delectation.

The film does have a lot going for it, or I wouldn’t have watched it to the end. It is visually stunning, it’s ambitious, it tries to convey the feel of a time period very different from our own. Alas for the wooden dialogue. Aside from the rape scene, the only part of the film I remember specific lines from is the one in which Rutger Hauer declares earnestly to his companions, “Forks and knives are part of our lives now!”

I’d cheerfully rewatch Hauer in Blood of Heroes three times in a row. I hope never to see Flesh and Blood again.

Aonghus – I don’t actually know where Mr. Verhoeven shot this film, although I suppose I could hop(scotch) over to imdb and find out in a jiffy. My sense was he filmed in Europe.

Sarah – Your tongs are 100% understandable. I would not criticize anyone for walking away, possibly in a real fury.

“Alas for the wooden dialogue.” Some of it is clunky (Stephen’s father’s lines clank like old armor), but I suspect half the problem is that this is one of Verhoeven’s first English-language outings. Same for the screenwriter. The dialogue lacks a native speaker’s nuance.

Your instincts are good. It was shot in Spain.