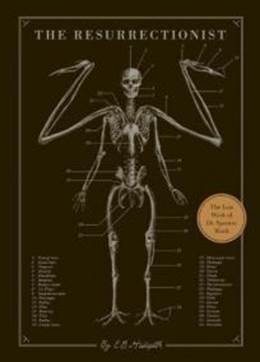 “If they knew what horrible things were available to them they would take comfort in their own suffering.”
-Dr. Spencer Black

I have been sitting here for long moments and I am still not sure where to start telling you about this.

It is art and science and masterful storytelling packaged and tied with a blood splattered ribbon. It is at once indescribably beautiful and nightmarishly horrifying. It is my latest obsession and my signed copy caused me to remove everything else from my coffee table to ensure no other object would detract from it.

It is The Resurrectionist, by EB Hudspeth.

Hudspeth is one of the people I couldn’t wait to introduce you to, whom I met at this year’s C2E2 event in Chicago.  When Nicole at Quirk Books got in touch, she described EB (he said we could all call him Eric) as “author, artist and creator of ‘Frankenstein meets Gray’s Anatomy.'”

Couple this with Quirk’s charter of publishing only 25 strikingly unconventional books every year, and this amounted to an opportunity there was no way I was going to miss.

Eric Hudspeth came in out of the rain (literally) to sit down and talk about The Resurrectionist during his visit to Chicago – the 1893 version of which figures prominently in his tale.

An Interview with Eric Hudspeth

Conducted by Sue Granquist, May 2013 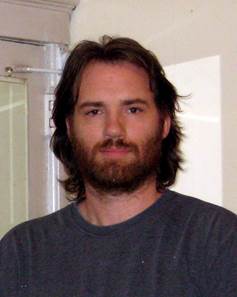 GC: Eric, this is everyone. Everyone, this is Eric. Eric can you tell us a bit about The Resurrectionist?

EBH: Well, it’s a classic mad scientist story about a 19th century doctor, Spencer Black, who takes an interest in abnormal births and birth defects. He wants to discover why these things happen as he believes nature does not make mistakes.

Black comes to the conclusion that mythological creatures weren’t folklore but instead represented our real ancestral past and a lot of their genetic code is recessive in modern day humans which manifests itself through birth defects. For instance, a baby born without arms is nature’s attempt to recreate wings.

Black becomes interested in restoring mankind’s lost nature. Like Dr. Frankenstein, he’s brilliant and ahead of his time, but like Frankenstein he is ostracized from his own professional community due to the outlandishness of his claims. Because he has a family to provide for, Black begins working with a carnival which is where he discovered many “examples” of his theories in glass jars, many of which he firmly believes are real.

Why do I get the feeling this is going to go horribly wrong?

Well, Black starts out using taxidermy to illustrate his theories from a medical standpoint; which does nothing to improve his credibility. Realizing this approach isn’t advancing his cause he begins working on living creatures; the first one being a beagle to which he surgically attaches wings and which he calls Darwin’s Beagle. He exhibits it on a stage in the carnival sideshow.

Clearly this is where things go horribly wrong. Audiences are horrified and Black has to endure community and religious backlash. He turns into an outcast who is harassed by the authorities and who is a pariah in the medical community. He determines to make one last appeal for his theories on a world stage at the Chicago World’s Fair of 1893. 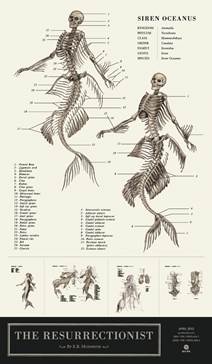 You wrote this story specifically for me didn’t you?

Well not exactly, no. Black exhibits some of his more fantastical creations at the fair to disastrous results which drives Black out of the public eye permanently.

Black never intended to scare anyone; he’s just lost in the obsession of his work which just takes him over and drives him mad. Once the Pandora’s Box is unlocked, you can’t shut it again.

The book is remarkably illustrated and is almost equal parts narrative and drawings.

Yes, the story itself is only about 70 pages long and told in the third person. It’s written as if a museum curator came upon Black’s journals and is telling the doctor’s story so it has a non-fiction feel. You’re left with a lot of unanswered questions just as if this were a real journal.

And you’re the artist as well?

Yes, that’s the other half of the book. There are about 100 anatomical illustrations which is the emphasis of the story.

Unlike a fiction tale that is illustrated, this is an art book accompanied by a story.  It was fun creating a book where the emphasis is on the art.

This is just an incredible and nightmarish idea.  Where did the inspiration come from?

I was working on a sculpture of an angel but I wasn’t happy with it. It was too classical – you know, beautiful woman figure with wings.

I became bothered by the idea that the only adjustment I had made was the size of the wings; they had to be huge in order to produce enough lift, yet the angel’s body was too slight and delicate.

I started sketching the anatomy. What would an angel really look like? How much muscle would it take to work wings big enough to lift a person? I basically tried to figure out what changes to basic anatomy would be necessary for a human figure to fly?

This is where the inspiration for The Resurrectionist came from. I wanted to keep the creatures true to their folklore depictions; for example a mermaid or a centaur.

So it wasn’t just marrying different anatomies, it was coming up with the different kinds of tissues and muscle structures that would make them possible. 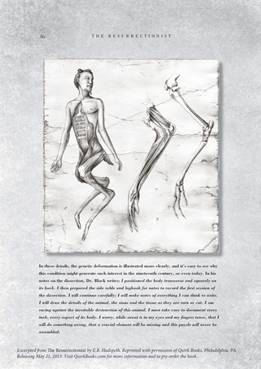 So The Resurrectionist was born out of an anatomy project of art work and then I wrote the story around that. The hand-drawn nature of the illustrations put the story in the right century; the late 1800’s, when doctors either needed to know how to draw or had to hire artists to do anatomical illustrations for them. It was part of being in medicine.

Your publicist likened The Resurrectionist to Frankenstein. Do you agree with that analogy?

I think Black is different from Dr. Frankenstein in that I made Black as human as possible. I made him a husband and father so he couldn’t escape real life like the classic mad scientist often can; as Black’s obsession grows, his world shrinks.

I know I’m re-inventing the wheel to a certain extent, but I’m adding my own flavor to it.

But what I really want to know is, will there be more to this story?

The Resurrectionist stands on its own at the end. But when I wrote it, I wanted to open a black cabinet of legacy and the real challenge with that is where to take the art.

I want to avoid redundancies, but I also want to ensure the sequel offers up art in an equal portion to the first. I don’t want anyone disappointed that the second doesn’t have as many illustrations.

Hollywood has to have come calling by now…

But I can tell you, they will. And until then, have a peek at the trailer Quirk created.  It will give you a small taste of what you’re in for.

The Resurrectionist hits store shelves on May 21st and even though it’s offered in an e-version, don’t do it.  Buy the hardcover and immerse yourself in the entire beauty and horror of it.

I requested a review copy of this on Monday I think it was. The book arrived today from the publisher. Wow. Heavy, gorgeous, coffee table quality, and the over 100 pages of fantastic anatomical illustrations of demonic or mythical creatures! Can’t wait to read the text (which is only some 65+ pages). It’s entirely fictional but reads like one of those “lost histories” so popular these days. Sometime in the relatively near future my review will appear at SF Site.