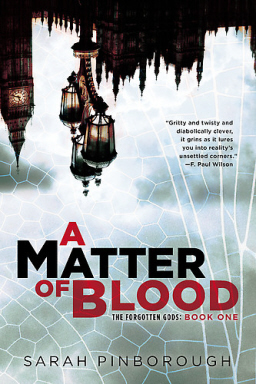 You can’t judge a book by its cover.

But you know what you can judge by the cover? The cover. And since that’s an important part of a book, I guess you can make a successful partial judgment just by holding a book at arms length for a few seconds. Admit it — you do it all the time, I’m just giving you some air cover here.

Come to think of it, it’s a pity you can’t judge books by their covers. Because, man, that would save me a lot of reviewing time that I could put to good use playing Mass Effect.

Until that happy day, we’re stuck doing things the old fashioned way, with hours of bleary-eyed reading late into the night. Unless you’re like me, of course, picking through the weekly new arrivals until you find a cover that makes you say, “Whoa. That looks cool. I should tell people about it.”

Which brings us nicely to Sarah Pinborough’s new novel A Matter of Blood, the first volume of The Forgotten Gods trilogy. Which, if you haven’t guessed, has a great cover, with an upside-down London skyline and a cracked overlay that looks like reptilian skin.

And the book description sounds pretty intriguing too.

London’s ruined economy has pushed everyone to the breaking point, and even the police rely on bribes and deals with criminals to survive. Detective Inspector Cass Jones struggles to keep integrity in the police force, but now, two gory cases will test his mettle. A gang hit goes wrong, leaving two schoolboys dead, and a serial killer calling himself the Man of Flies leaves a message on his victims saying “nothing is sacred.”

Then Cass’s brother murders his own family before committing suicide. Cass doesn’t believe his gentle brother did it. Yet when evidence emerges suggesting someone killed all three of them, a prime suspect is found — Cass himself.

Common links emerge in all three cases, but while Cass is finding more questions than answers, the Man of Flies continues to kill…

The next volume, The Shadow of the Soul, is due in August, and the final installment, The Chosen Seed, arrives in December.

Sarah Pinborough lives in West London, and is the author of The Reckoning (2005), Breeding Ground (2006), the supernatural crime Dog Faced Gods trilogy, and many others. She’s developing an original horror screenplay, Cracked, and adapting The Dog-Faced Gods for TV.