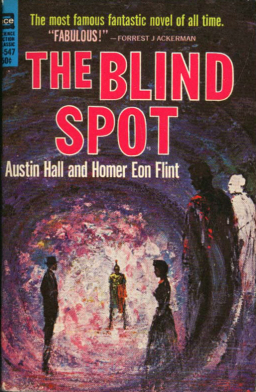 All right. Listen up, all you young fantasy punks. I know you’re out there, devouring contemporary fantasy by the truckload, while I’m trying to school you on the forgotten classics of the past. I know you’re not listening, because I rarely paid attention to the crotchety old-timers who tried to get me to read forgotten fantasy classics 30 years ago. I was too busy with Lord of Light, Bridge of Birds, Watership Down, and Swords Against Death.

Eventually, of course, I learned the error of my ways. I began to listen to my elders, and appreciate the glory of the pulp era of fantasy. I read the books they passed to me, and gradually became wiser, more worldly, healthier, and better looking, with fuller and more lustrous hair and better posture.

Mostly. I didn’t read, like, everything they foisted on me. Because Star Trek was on in the afternoon, and Dr. Who in the evenings (the Tom Baker episodes, naturally), and a lad needs some down time.

Now, these Vintage Treasures articles are my vehicle to pass along the accumulated knowledge and wisdom of a fabulously well-read generation (i.e. old people) to the eager and outstretched hands of the readers of tomorrow (you lot). That’s admittedly harder to do with the great classics of fantasy I haven’t read yet. Theoretically though, it might be possible to duck some of my personal responsibility by passing them along instead.

In short, skipping a generation and cutting out the middleman. Now pay attention, because this is where you come in.

I am tasking you with a sacred undertaking, upon which the very future of our beloved genre rests: to read, appreciate  and evangelize the great works of 20th Century pulp fantasy. The ones I never got around to, anyway. So I can get back to that Season Two Star Trek DVD which arrived last week. Appreciate it.

Let’s start with The Blind Spot, by Austin Hall and Homer Eon Flint. What’s it about? I have no idea. If you were paying attention, you’d have clued in to that. But right there on the cover Ace Books calls it “The most famous fantastic novel of all time,” and the esteemed Forrest J. Ackerman shouts out the word “Fabulous!” That should be good enough for you.

The Blind Spot was published in 1921 as a serial in Argosy-All Story Weekly, and reprinted by Ace Books in 1964, with a doubtlessly fascinating and informative introduction by Ackerman that would have made writing this post a lot easier if I’d known about it 15 minutes ago. It is 318 pages in paperback for 50 cents. Finding a copy is left as an exercise to the reader (I got my copy on eBay for under a buck.) And get a move on, the cultural heritage of fantasy is at stake. But no pressure.

Looks like kindle and iBooks have it as a free PDF. But someone gave it a 1 star rating on amazon…

As a free PDF I guess there’s no excuse to not try it.

Right you are. And oddly, that 1-star review has filled me with a sudden desire to read it. I may clear the decks and try THE BLIND SPOT after all.

Here’s the Amazon link to the free Kindle version (and that 1-star review):