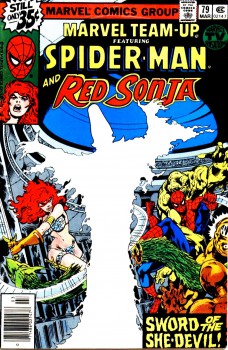 Let’s start with the cover. In the foreground is our reverse-silhouette antagonist, looking very much as if some meta-fictional demon took a pair of cosmic sheers and simply snipped him out of that four-color reality. In the background is Red Sonja, looking very much in her element as she chops the head off a giant snake. Standing beside her is Spider-Man, punching out a demon. If none of this convinces you to pick up the issue, a small blurb in the corner reminds you that it’s “Still Only 35¢.”

The first page reveals that this story will be set not in the Hyborian Age, but rather in the equally mythical 1978 New York. December 22, to be specific. And the team who will be working on this story? Chris Claremont (who wrote all those X-Men comics you loved as a kid), John Byrne (who wrote all those Fantastic Four comics you loved as a kid), and Terry Austin (who probably inked a few issues of every title you loved as a kid). This is what would commonly be referred to as a dream team. And seeing the casual beauty of something like Spider-Man swinging past a museum on a snowy evening gives only a hint of what’s to come.

Page two is the story of security guard Gus Hovannes going on his nightly patrol of the museum. And let me add once again that, yes, it is nice when someone as incidental as a random security guard gets a name and a little background. It makes the world feel lived in, the characters richer. So when Gus breaks through a glass display case and grabs the onyx necklace, his cut hands spilling blood on the ancient jewelry, he’s a little more than just a plot device.

The scene then cuts to an office Christmas party at the Daily Bugle. I’ve ranted before about the trend towards decompressed storytelling, but it’s truly amazing to see how quickly a great writer can present a string of characters and their major personality traits. If you don’t know who J. Jonah Jameson is, one panel tells you everything you need to know about him. Mary Jane Watson gets her one character-defining panel as well (Kirsten Dunst never did THAT). And then the editor gets a call about some sort of disturbance at the Metropolitan Museum of Art. He sends Peter Parker and Charlie Snow out to investigate by virtue of the fact that they’re the only two people at the party who aren’t falling down drunk.

So Mary Jane sneaks in the back of the car that Peter and Charlie are in to see what all the excitement is about. And let’s take a moment to consider the news reporter and the news photographer who didn’t notice there was a woman sitting in the backseat (not even crouched on the floor under a conveniently draped blanket or stowed in the trunk, Spritle and Chim Chim-style). Ah well, they were in a hurry.

So, when the three of them arrive, they find the museum is engulfed in spectral flames and giving off an aura of evil. Charlie Snow pushes through the police barricade and demands entry. And then he’s never seen again. I don’t mean he’s disintegrated by magic flames or passes out from the nausea of gazing upon supreme evil or anything like that. It’s just a dangling plot thread where the writer seemed to forget there was a reporter in the area.

Of course, Peter can’t worry about his co-worker because he’s off in search of a back entrance into the museum, not only to get some sweet pictures of whatever’s brewing, but to deal with that feeling of foreboding doom. And Mary Jane, being way cooler than the simple “girl next door” in the movies, follows him because she’s worried about him and, honestly, because she loves a little adventure herself.

All thoughts of Peter and Spider-Man are gone, though, when she notices a sword in a glass display case begin to glow. Unlike the onyx necklace, the sword is kept in an unlocked glass case, so Mary Jane just lifts the lid and pulls it out, no longer quite in control of her own thoughts.

And page eight sees the return of Red Sonja in 1978, possessing another redhead who tends to be interested in adventure of a very different sort. And when Spider-Man sees a woman in a steel bikini start slicing through the monsters that are beating him up … he just goes with it. Really, issue 79 means that he’s teamed up with 78 other crazy people (including the original cast of Saturday Night Live just a few issues earlier). Crazy’s just par for the course.

Red Sonja, for her part, doesn’t even question where she is or how she got there. She sees monsters and starts cutting until she finds the source of the evil … her old enemy, Kulan Gath.

Long-time readers of these posts will not recall Kulan Gath ever being mentioned in a previous adventure. In fact, the only reference I find to Kulan Gath was the wizard whom Conan of Cimmeria and Elric of Melnibone fought in a two-part Conan the Barbarian story (which you should absolutely read). So my guess is that somewhere between the time when the oceans drank Atlantis and Jimmy Carter was elected President, Red Sonja fought Kulan Gath a bunch of times, probably after the end of her first fifteen-issue series.

Unfortunately, since this is a Marvel comic, Spider-Man and Red Sonja have to have their obligatory misunderstanding upon first meeting. They fight one another, Sonja assuming that Spider-Man is an agent of Kulan Gath. She manages to knock Spider-Man unconscious, but he’s still stuck to the ceiling and holding her at the time (duh), so they both end up plummeting to the floor.

When they wake up, both heroes are bound on crosses before a pit of greenish yellow evil. While Kulan Gath can translate Hyborian to English, Spider-Man and Red Sonja never understand a word that the other one says throughout the story. But when a green slime monster begins rises from a pit to engulf you, words aren’t really necessary. Since Spider-Man has the proportionate strength of a spider (something Kulan Gath wouldn’t know), he manages to break free and set Sonja loose as well.

And here we see the real difference between Spider-Man and Red Sonja, between a standard superhero and a sword-and-sorcery hero. Spider-Man is trying to escape the museum to get help (Doctor Strange doesn’t live too far from the Metropolitan Museum of Art, one hopes). Sonja, on the other hand, is prepared to fight the demon horde surrounding her. This is not a matter of Spider-Man being a better judge of odds or Sonja being braver. It comes down to the fact that superheroes generally don’t kill as a first option, even if it’s demons. It’s a cultural thing. Red Sonja comes from a kill-or-be-killed era of history where she bloodied her sword more days than she didn’t.

When Kulan Gath starts shooting lighting bolts out his fingers, Our Friendly Neighborhood So-and-So realizes that he can’t risk leaving him alone even for a short time, so he tries another gambit. And it’s a plan both brilliant and insane, the way the best comics of the Bronze Age managed.

Up to this point, Kulan Gath (and Red Sonja) have been inside the museum, in a wing re-built to resemble an ancient temple. As he listens to Gath’s ranting, Spider-Man realizes that neither of them has figured out it’s just a mock-up. They both believe the museum is a real temple.

So our hero manages to tackle the wizard and send him smashing through the glass front doors of the museum. Out into downtown New York. They’re surrounded by skyscrapers, automobiles, floodlights … ten thousand years of progress, all at once. And Mr. “I’m a dark sorceror who’s going to rule the world” totally loses it.

Spider-Man takes the moment of confusion to tear the necklace from Kulan Gath’s throat, having reasoned that he must have possessed a human body (there was a mention of host bodies earlier in the story, so it makes sense that he’d assume as much). Again, Sonja was ready to run him through her with sword.

Without the necklace, Kulan Gath changes back to Gus Hovannes. With the threat averted, Red Sonja likewise releases her possession of Mary Jane Watson’s body. And everything goes back to relative normalcy (until a couple years later, when the necklace is recovered and Kulan Gath fights the X-Men).

Now, obviously Chris Claremont, John Byrne, and Terry Austin had other things to do; but imagine if these three had pooled their resources on a monthly Red Sonja comic. I would have loved to have seen Byrne’s rendering of the Hyborian Age. (Did he ever illustrate an issue of Conan the Barbarian?) And one of Claremont’s trademarks was crafting strong female characters in an era largely bereft of them (I mean 1970s comics, not the Hyborian Age). Perhaps going in a different direction, they could have had Red Sonja possess some modern-day woman, Captain Marvel-style.

But no such thing happened. And all we have of what might have been is this amazing and bizarre story from an era of storytelling where it really felt like anything was possible.

Next Week: I Review Some Literature

Next week… literature? Say it isn’t so! Is this really the end of the RED SONJA era at Black Gate?

The Red Sonja era is coming to an end soon … but not just yet.