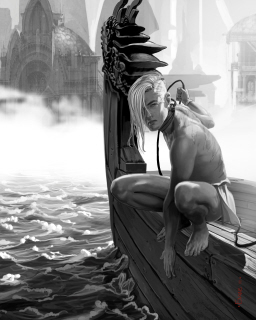 A classic sword & fantasy tale. Lod had urged the last of the human soldiers, who worship the god Elohim, to rise up and rebel against the conquering Nephilim giants since “it was better to die on your feet than live on your knees.”

But all the soldiers were killed or captured. Now Lod is prisoner of the Nephilim, slated to die in the arena as a pit slave…

“The Pit Slave” is a 7,000-word short story offered at no cost. It is the sequel to “The Oracle of Gog” (from Black Gate 15), and part of Lost Civilizations, a six-book series. A slightly different version of “The Pit Slave” appears in The Lod Saga, available now at Amazon.com and Barnes & Noble.com.

[…] “a cross between Conan and Elric of Melniboné,” and Louis West at Tangent Online called “The Pit Slave” “classic sword & […]