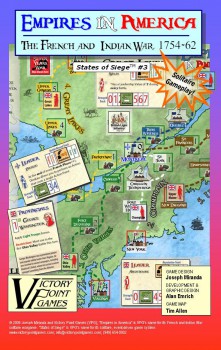 I should probably blame the whole thing on John O’Neill and Eric Knight.

It was Eric who introduced me to the true joy of war board games. Sure, I’d played many a game of Risk back in junior high, but the more I read about actual tactics, the more frustrated I became with the original board game which is more about luck than real strategy.

The late ’70s and ’80s, when I was in junior high and high school, were a golden era for tactical boardgames like Panzer Leader and Axis & Allies. I was aware of, but rarely played these games because when given the chance to game with friends, I chose role-playing over board games every time. I didn’t know how cool they could really be until Eric drove down a few years back and introduced me to the wonderful old Yaquinto board game French Foreign Legion and we had three hours of fun pushing cardboard counters into death-defying positions a la old Hollywood desert adventure movies. In those over-the-top extravaganzas every bullet counts and even the extras get dramatic death scenes.

I suddenly realized the fun I’d been missing, but I wasn’t well and truly hooked until O’Neill gave me an extra copy of Barbarian Prince and told me about solitaire boardgames. You can play a lot of games solitaire if you have to do so — as any younger sibling or only child can tell you — but it was never much fun to play Risk or Clue against yourself. Some games, though, are designed to be played solitaire, which is what drew me to Victory Point Games.

What I was REALLY looking for was a copy of French Foreign Legion (copies are very, very scarce, although Eric generously tracked one down for me as a gift). What I found was a solo wargame based on the Battle of Rorke’s Drift that had been inspired by one of my favorite movies, Zulu. Since stumbling upon that first game I’ve tried out a number of Victory Point Games titles, and today I thought I’d write about one of my favorites, Empires in America.

Military boardgames can broadly be divided into tactical or strategic. In a tactical game,  each counter represents a single tank, or a small unit, or even one soldier. In strategic games, every counter on the board might well represent an entire division (with hundreds of thousands of men) or army, or even several armies. The former allows you to use terrain and different troop qualities to shape the battle, while the latter simulates a time-compressed bird’s eye view of an entire war.

Given my own fascination with the tactics of ancient generals, I shouldn’t have been so surprised to discover that I simply have more fun with tactical than strategic games, and games where tactical theory is more important than lucky die rolls. As a result, if there’s a strategy-based game I enjoy, it must have something extra going for it. Such a game is Empires in America. 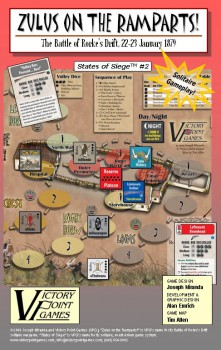 Empires in America is part of the Victory Point Games States of Siege game series. In a States of Siege game, counters representing enemy forces move slowly forward along four or more tracks, and you expend action points each turn trying to push those forces back. Some of the enemy movements are randomly generated by each game’s card deck, along with occasionally helpful events for yourself, or world events that have an effect upon the overall game (in Empires in America, for example, the number of cards you pull each turn changes after the Seven Year’s War card comes up).

The Victory Point Games company has released a variety of States of Siege games in the last several years, and they have an enthusiastic following. They also have their detractors, and I’m inclined to agree that one of the criticisms leveled against some series entries rings true — that because of the random generation of events and so much depending upon single die rolls, it can feel like the game is playing you rather than you having much control over what transpires. However, I found Empires in America to be different.

The concept is thus — you’re playing the French holdings in America as the English try to expand their own. Historically, the French lost, so the odds are against you. Yet if you play smart, and have a little bit of luck, you can change the course of history. Game designer Joe Miranda’s take on the States of Siege rules allows a player to build forts and trading posts to hold up the British advance or to bolster supplies, respectively, and to deploy  generals of varying quality. I tried some of the States of Siege games multiple times and simply set them aside — not Empires in America, which I’ve continued to think about since I played it last month. Once you get a grasp on the rules, there really is a mounting sense of tension as the Brits invade your territories. Can your loyal militia and Indian allies force them back? Can your fort hold out?

The interesting thing about the States of Siege engine is that it allows game designers to make what they will with it, thus we have tactical games where you’re fighting off zombies (Dawn of the Zeds) or Zulus (Zulus on the Ramparts) or strategic games like We Must Tell the Emperor or even hybrid games like Soviet Dawn, where you’re managing armies AND political movements. In a recent issue of Black Gate, I even reviewed a fantasy States of Siege game, Legions of Darkness (to which I gave two thumbs up). I have yet to try Zulus on the Ramparts, much as I would love to do so.

After enjoying Empires in America so well, I think I will next try out Malta Besieged, one of the more recent VPG designs, said to be complex and rewarding, with important decision points. Honestly, I’ve never been that interested in either the French and Indian war that Empires in America is centered around, nor have I been particularly fascinated with WWII era Malta (Malta Besieged). I’m an ancient history guy. But a compelling game tells a story, and puts you at the center of events, and on top of that, a good game is a lot of fun.

Incidentally, most of the Victory Point Games I’ve played so far can double as excellent teaching tools about the events they simulate. Some of them even come with online study guides. If you’re curious to see what one of their more tactical war games plays like, I’ve just reviewed their WWI trench warfare game over at my own web site. Otherwise, stay tuned, and I’ll bring other solitaire games your way in the coming months right here at Black Gate.

[…] board games from time to time, as I’ve mentioned occasionally here on my own site and at Black Gate. As I’ve said before, I blame the whole thing on John O’Neill, although Eric Knight […]