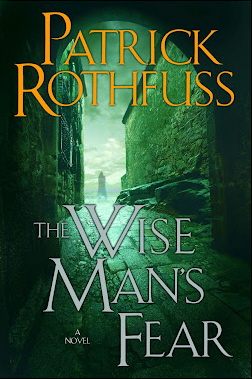 Patrick Rothfuss’s The Wise Man’s Fear, the second volume of The Kingkiller Chronicles, has won the David Gemmell Legend Award for Best Fantasy Novel of 2011.

The David Gemmell Legend Award is a fan-voted award administered by the DGLA. The Legend Award for Best Fantasy Novel was first granted in 2009, to Andrzej Sapkowski’s Blood of Elves; in 2010 the winner was Graham McNeill’s Empire: The Legend of Sigmar, and last year’s was Brandon Sanderson’s The Way of Kings.

The nominees for the 2012 award also included The Heroes by Joe Abercrombie, Blackveil by Kristen Britain, Warhammer: Blood of Aenarion by William King, and The Alloy of Law by Brandon Sanderson.

The Morningstar Award for Best Fantasy Debut was awarded to The Heir of Night by Helen Lowe.

The Ravensheart Award for best Fantasy Book Jacket/artist went to the cover for Warhammer: Blood of Aenarion, done by Raymond Swanland.

As glad as I am to see the late, great David Gemmell’s name live on in an award which celebrates fantasy literature, I can’t say I agree with the decision.

As near as I can tell from the Gemmell site the award is given for best fantasy novel as elected by popular vote. So under those very broad parameters I guess that qualifies The Wise Man’s Fear. Unfortunately this series in no way resembles the spirit and style of Gemmell. There’s no blood and thunder in it at all. I’d like to the see the parameters of this award changed to “best fantasy novel in the spirit of Gemmell’s Legend,” so we could see works of heroic fiction/swords and sorcery or military fantasy recognized.

Joe Abercrombie’s The Heroes would have been a much better choice.

But then we get into further problems of interpretation, to me Abercrombie isn’t in the spirit of Gemmell at all. I like them both, but Abercrombie’s universal cynicism doesn’t seem to acknowledge the existence of heroism, whereas Gemmell’s prevailing theme was heroism. So what exact criteria and whose judgement do we use?

I honestly think the distinction between epic fantasy and sword & sorcery (and everything else on the continuum) is probably going to be lost on the majority of readers, and since this is a popular award, I don’t see how it would ever get around that.

I’d love to see an award to honor ‘blood and thunder’ style fiction, and we thought we might be getting one with the DGLA, but we didn’t. I don’t think it’s necessarily a bad thing, it’s just a different good thing from what some of us were hoping for.

All that said, a popular vote that just rewards what has already climbed to the top of the sales pile every year could get pretty boring. Sapkowski was a big surprise for the anglosphere and got us thinking about the fantasy form in other cultures, a Warhammer novel was great validation for a massive vein of S&S fantasy that gets no respect, but the last two are the usual suspects through and through.

Agreed Brian and Bill. I too desire the award was for more Gemmell-like work. Of this year’s 5 finalists, King or Abercrombie would have been the closest … and I agree with Bill on the nature of THE HEROES not being very LEGENDary.

I’m all for the DGLA but I wish it was more ‘blood and thunder.’

I do absolutely love Swanland’s victory for best cover art though!

Hi Bill, agreed that The Heroes is much more cynical and bleak than Legend. But the similarity is that both Gemmell and Abercrombie use warfare to put combatants under the microscope to see how they react; in Legend men like Rek rise above and become heroes, while in The Heroes men like Craw can’t emerge from the muck and slip back into old bad habits. Even though the destination the novels reach are quite different, the vehicle is the same.

The Name of the Wind on the other hand is about a boy-wizard grappling with issues like too much homework, unrequited love, and broken lutestrings. It shares much more in common with The Belgariad or Harry Potter.

I can’t see why the DGLA couldn’t be decided by a panel with S&S sensibilities.

Don’t they use a panel to decide on the finalists, which are then put to a popular vote? If so, the panel doesn’t seem interested in making the distinctions we are for whatever reasons.

I doubt keeping the award focused on S&S would be hard to implement, I just don’t think the desire is there.

And, just as we are doing via Abercrombie, once that element of judgement creeps in you’ll have all sorts of nuance arguments (and I agree, Abercrombie is much closer to the kind of fiction I’d want to see showcased by DGLA than is Rothfuss), which might actually make the whole thing perplexing to readers who are oblivious to such distinctions.

Who knows? At least DGLA doesn’t exclude media tie in, its populist roots are something i think it could be said to uphold very nicely.

Bill Ward said everything I wanted to with this one sentence:

> I honestly think the distinction between epic fantasy and sword & sorcery (and everything else on the continuum) is probably going
> to be lost on the majority of readers, and since this is a popular award, I don’t see how it would ever get around that.

Winnowing process is reversed, Bill. Popular vote on the Long List narrows it down to a Top 5 list that the DGLA panel then votes on. Or at least used to; all I can find on the site now says that the Short List is voted on again, but it doesn’t specify by whom.

So the damage is twofold: There doesn’t seem to be much distinction required for submission by the respective publishing houses outside of ‘fantasy book published in last year,’ and the judging panel doesn’t seem to hold the finalists to a Gemmell standard. At least an understandable one.

I am not saying it has to be strict and only works exactly like those of David Gemmell should ever win. I am saying that if you’re going to create an award named after and in honor of a particular writer and his style, it is reasonable to expect that the contestants for that award be somewhat harmonious. After all, if I said to you John, ‘Hey, I loved every David Gemmell book I read, but I’ve read them all, who else writes stuff like that, who do you think I should pick up next?’ would you recommend Pat Rothfuss? A glance at the DGLA site also reveals that the mission of the DGLA has changed from 4 years ago, when they did seek to award works in the spirit of DG. Just read the closing two paragraphs of Stan Nicholls’ obituary for DG to learn what they used to be (and should be) after. This would also explain why THE HEROES wouldn’t truly qualify either.

Sanderson’s win last year was a ‘Hmm, okay, I can see it if I squint a little but it’s there, no prob’ … the Rothfuss win this year is disappointing, especially knowing what was available on the long list. Of course I believe that Erikson’s THE CRIPPLED GOD should have won it, but I would not have been surprised to see it gift-wrapped and handed to GRRM’s DANCE WITH DRAGONS…which would at least not be the topic of such a conversation. 😉

[…] Award for the past four summers. It’s usually awarded in July, and last year it went to The Wise Man’s Fear by Patrick Rothfuss. There have been some changes this year, however. The big one is that the […]

[…] Award for the past four summers. It’s usually awarded in July, and last year it went to The Wise Man’s Fear by Patrick […]

[…] Legend of Sigmar, in 2011 the winner was Brandon Sanderson’s The Way of Kings, and last year The Wise Man’s Fear by Patrick Rothfuss received the […]

[…] so far — The Name of the Wind, reviewed for us by Robert Rhodes, and the Gemmel Award winner The Wise Man’s Fear — which doesn’t make it much of a chronicle by fantasy standards, really. But it has […]

[…] Lowe’s The Wall of Night has been getting some good press. The opening volume won the Morningstar Award for Best Fantasy Debut, and the second was nominated for the 2013 David […]