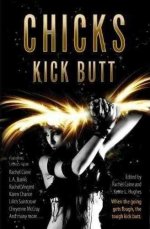 I recently reviewed Chicks Kick Butt over at The SF Site. My reaction was a little less than enthusiastic, certainly less so than fellow Black Gater Alana Joli Abbott’s review.  Here’s probably why:

…an anthology called Chicks Kick Butt sounded like something that would appeal to me, even if I’d never read anything by the female authors collected here, nor the editors. But, half the fun of picking up a story collection is discovering the work of people you’ve never heard of, or have heard of but never read.

In this case, however, that’s part of the problem. Some of these stories will no doubt resonate with their fan base. Not being part of them, I’m left to wonder what the fascination is. In part, that’s because I don’t get the whole vampire deal. Though I understand the charismatic kink of the guy (or girl) who drinks your blood and consumes your soul, maybe the first time someone thought of putting a cell phone in the hands of the attractive undead to use their curse for good instead of evil, or at least have highly charged sex, but still have problems just like the rest of us whose throats are unblemished, it was kind of fun. But an entire genre with multiple sub-genres of this stuff, really?