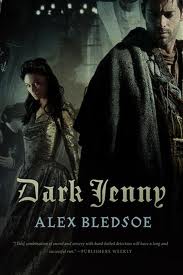 Readers new to Alex Bledsoe’s Eddie LaCrosse series should brace themselves for culture shock, because while the book is set in a medieval world, all the characters have distinctly un-medieval names and mannerisms.  Be prepared for Gary, Eddie, Liz, and Angie to appear in the first few pages.  In keeping with their anachronistic names, all the characters speak in a modern conversational style.  Swords are referred to by make and model, like cars.

It’s a dramatic choice on Bledsoe’s part that will leave many readers feeling alienated, but I think it works.  The novels are hard-boiled crime fiction just as much as they are fantasy, and the casual style means that Bledsoe can give his hero Eddie a dry wit that requires no translation to be funny.  It also gives the story a freshness that the setting, which is your stand low-fantasy budget medieval, tends to lack.

For my part, I found that once I got past the anachronisms (first in The Sword-Edged Blonde, now in Dark Jenny), I was thoroughly captivated by the raw strength of Bledsoe’s writing and story-telling, and found myself with a book that seemed to stick to my fingers.

Dark Jenny is a tale told in flashback, as Eddie LaCrosse, grizzled ex-mercenary and current investigator-for-hire, relates the tale of one of his hardest jobs, in which he found himself embroiled in events at the heart of a wondrous kingdom’s collapse.  Names have been changed to protect the guilty, but it’s clear from the get-go that Marcus Drake is Arthur Pendragon, Jenny is Guinevere, Elliot Spears is Lancelot, “Dread” Ted Medraft is Mordred, and so on.

Eddie is working a minor job at a gala held by Queen Jenny when one of the Knights of the Double Tarn is murdered by poison.  Suspicion falls first on Eddie himself, because panicked noblemen need a scapegoat, but Jenny herself is also implicated.  The Knights no longer trust her because they suspect she’s been unfaithful to the king with Elliot Spears, the realm’s greatest warrior.  Eddie himself is tasked with proving the queen’s innocence and, ultimately, preventing a civil war.

Bledsoe pulls quite a few surprises from his seemingly obvious set-up.  Although the characters do correspond pretty closely to Arthurian figures, they and their relationships differ in ways that surprised me.  Bledsoe is also exceptional at creating and sustaining tension, which is actually sustained by the meta-narrative.  Eddie himself, like Bledsoe, saves the best for last, and hides enough information to make the conclusion as exciting as any mystery novel finale I’ve read.

The overall tone is awfully cynical, and that may be offputting to some readers. I’ll admit, it was rather off-putting to me.  But I felt that Bledsoe preserved the fundamental heroic character of many of his figures, even as he gives them a modern, gritty veneer.  Merlin-analogue Cameron Kern may smoke weed, but he still possesses a penetrating wisdom, and Sir Kay may be Bob, but he remains a model of brotherly loyalty.  The ending itself, while it centers on the death of a dream and the fall of a bright kingdom, contains a small but powerful infusion of hope that prevents Dark Jenny from being a truly bleak experience.

While I would never describe it as particularly edifying, Dark Jenny provides wit, intrigue, and raw entertainment in spades.

[…] at Tor.com back in March. He is the author of the Eddie LaCrosse novels The Sword-Edged Blonde, Dark Jenny, Wake of the Bloody Angel and Burn Me […]