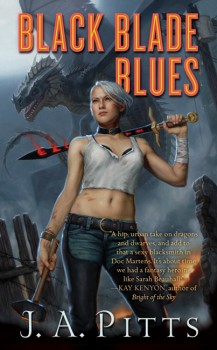 Black Blade Blues has a heavy dose of Norse mythology. Sarah has been chosen to kill dragons, runes appear on her skin that gives her magical abilities, and there is a lot of talk about her being ‘his chosen.’ The reader, like Sarah, doesn’t know what any of it means. There is also a secret that her girlfriend Katie and Katie’s brother have. What we do know is that there are dragons, and they are not the nice kind. I don’t believe the mythology is dead on, and I didn’t feel the need to go look it up. Instead it is a nice spin from the ordinary.

The story is not complicated, and it is something that has been seen before. Sarah tangles with a dragon, a story as old as time. There are some very nice changes in the urban setting that set Black Blade Blues apart from the majority of its vampire and werewolf counterparts. First off, the heroine is a moody female, but she likes women. Second off, there are other urban fantasy stories based off Norse Mythology, but this is my first, and was a nice change from all the lusty vampires. The battles are nice and the detail put into the fire-breathing dragon is solid. Sarah doesn’t always come out on top and there is a fair amount of gritty detail.

Black Blade Blues is the first of a series, and it has a great deal of explaining to do. Sarah was hard to connect to, which slowed the book down. On the other hand, the strange Norse magic floating around is fun. Dragons, giants, dwarves and magical weapons make for some neat intrigue. This isn’t the best Urban Fantasy around, but it was a nice switch from the same old vampires and werewolves.

[…] Honeyed Words, is a strong female lead. She has grown as a character since the first installment, Black Blade Blues, and it shows. She is working past her issues with her sexuality, and shows much more attention to […]