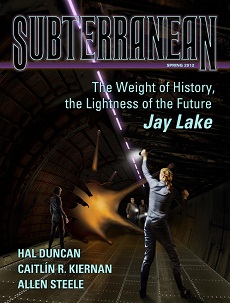 I admit I never know when to blog about Subterranean magazine. I really enjoy it, and I used to go to great lengths to acquire the print issues. But now that they’ve converted to an online zine they’re releasing the contents in a rolling format, a new story or article every week.

Do I announce it here when the first article goes up? Or wait until the entire magazine is posted, two months later? By the time a new issue is up, I’ve already forgotten what I did last time. So over the years I’ve finally developed a consistent system: I blog about it whenever I remember.

So here I am to tell you about the Spring 2012 issue. And it’s got a terrific line-up, nearly 70,000 words of fiction, including two big novellas from Jay Lake and Allen Steele:

Subterranean is edited by William Schafer, and published quarterly. The Spring 2012 issue is completely free and available here.

We last covered Subterranean magazine with their previous issue, Winter 2012.

[…] We last covered Subterranean magazine with their previous issue, Spring 2012. […]

[…] writing short fiction right up to his death, with his “HERE and THERE” appearing in the Spring 2012 issue of Subterranean Magazine, and “Bloaters” in Impossible Monsters, an anthology […]