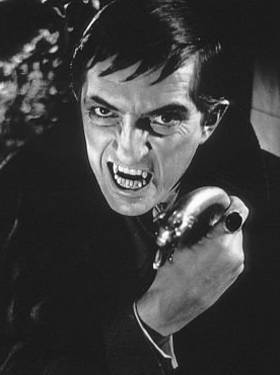 Before we had heard of Lestat, Bill Compton or Edward Cullen, one vampire alone dominated our collective pop culture conscious; the formidable and classic, Barnabas Collins.

This week the offices of Goth Chick News are draped in black, or I should say more draped in black, in respectful mourning for Mr. Jonathan Frid, who portrayed the character on the soap opera/horror series Dark Shadows (making his first appearance at the doors of Collinwood on April 18, 1967) until 1971, and who died last Saturday at the age of 87.

As we’ve previously discussed, Johnny Depp will be reprising Mr. Frid’s iconic role in the Dark Shadows remake set for release on May 11th, though it’s probably more appropriate to call is a “redo” as director Tim Burton has elected to make it a… sigh… comedy.

Jonathan Frid was the reason I used to run home from school to watch Dark Shadows. His elegance and grace was an inspiration then and will continue to remain one forever more. When I had the honor to finally meet him, as he so generously passed the torch of Barnabas to me, he was as elegant and magical as i had always imagined. My deepest condolences to his family and friends. The world has lost a true original.

Apparently Depp, like the rest of us, didn’t even hear about this sad loss until Thursday, when Frid’s Dark Shadows co-star Kathryn Leigh Scott paid tribute to him on her website:

I am so grateful to have worked with Jonathan, and to have known him as the charismatic, entertaining, complex and plain-spoken man that he was. What fun we had working together! He was irascible, irreverent, funny, caring, lovable and thoroughly professional, and in the end became the whole reason why kids ‘ran home from school to watch’ Dark Shadows.

I am so grateful that nearly five decades later, Jonathan, David Selby, Lara Parker and I were invited to play cameos in the new Dark Shadows, directed by Tim Burton and starring Johnny Depp as Barnabas Collins. How wonderful for the four of us to work together again and celebrate the legacy of Dark Shadows. I won’t ever forget the moment when the two Barnabas Collinses met, one in his late 80s and the other in his mid-40s, each with their wolf’s head canes. Jonathan took his time scrutinizing his successor’s appearance.

Though it does indeed appear that Mr. Frid willingly passed his wolf’s head cane to Depp and the Hamilton, Ontario hospital where Mr. Frid died lists the cause as “natural,” we can only hope that watching the trailer for the upcoming version of Dark Shadows isn’t really what put him in his coffin for good.

Re: “Tim Burton has elected to make it a… sigh… comedy.”

As I remember, the original was pretty funny, perhaps unintentionally so because it was so badly acted, badly written.

Perhaps the better term is camp, though I guess you could say it just sucked.

I was too young to know it was camp at the time. All I remember is running home to see DARK SHADOWS, sitting in front of my parent’s black & white TV in the middle of the day, and being SCARED TO DEATH.

I haven’t seen an episode — or even a clip — from Dark Shadows in over 40 years. I’m suspect if I saw it today it wouldn’t have the same impact.

But just in case, I’m not taking any chances.

Dark Shadows was very well written, and the actors gave all even without enough time, and certainly there was never enough budget. Still the entire Dark Shadows cast, crew, and producer, created a world that was real to us the fans. The tribute is the lasting memories. Jonathan Frid made Barnabas a “REAL” fictional character. Few can accomplish that. The old show business toast is due here: “Darling, I have loved you, but the show closed,….I still love you” May hell have mercy on the new Redo.

How poetic and appropriate.