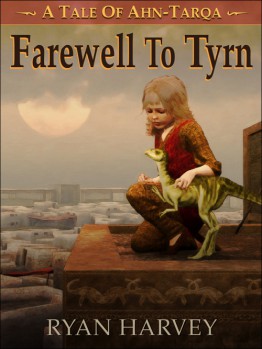 I’m taking a one-week break from Mars to do some shameless self-promotion, which I promise will be over quickly so I can regale you with a personal story. The Warlord of Mars next week, I promise.

I entered the realm of e-book publishing this week with my novelette “Farewell to Tyrn.” It is available for 99¢ at Amazon.com for the Kindle, and at Smashwords for all other e-reader formats (including vanilla plain text, which I find cool in a low-tech way).

“Farewell to Tyrn” is the second story released in my science-fantasy setting of Ahn-Tarqa. The first is my Writers of the Future-winning piece “An Acolyte of Black Spires.” Two more Ahn-Tarqa stories, “The Sorrowless Thief” and “Stand at Dubun-Geb,” are slated to appear in upcoming issues of Black Gate, so if you want to get a sense of the world, you can start with “Farewell to Tyrn.”

On the continent of Ahn-Tarqa, where science and magic are one, and humans share the land with great saurians, all races have in common a dreadful ailment: the disease known as “The Sorrow.” A lingering hopelessness with no cure. A fear of life itself.

But for twelve-year-old Belde, her days in the city of Tyrn, playing in the streets with her whip-smart dinosaur pet Rint, seem far removed from the Sorrow she sees in others. Then, one burning summer day, cruel sorcerers from the masked race known as “The Shapers” slither from their black towers into Tyrn and knock on the door of the workshop of Belde’s father.

Belde is about to drop into a nightmare that will carry her and Rint across the city, fleeing from the Shapers’ twisted killers, and into the glaring light of the truth about her life — a truth that echoes over all Ahn-Tarqa with the sound of the word “Sorrowless.”

Ryan Harvey, winner of the Writers of the Future Award, continues the adventure in the science-fantasy setting of his story “An Acolyte of Black Spires” with this new novelette of action, heartbreak, and discovery.

I will admit that self-promotion is a skill that does not come naturally to me. Penning those few paragraphs of advertising was far more daunting than editing “Farewell to Tyrn.”

This leads me out of the self-promotion bit and into why and how I made this first venture into the new universe of ebook self-publishing. Add this small recollection onto the heap of info about digital books and the unforeseeable future.

The changing of the publishing industry in the face of the surge of ebooks and e-readers was the dominant conversation last year in the literary world. I sometimes thought I might drown under the flood of data and the (often violently) conflicting opinions that were winging around the Interwebs. There are now more blogs dedicated to self-publishing than there are blogs dedicated to LOLcats; a terrifying number.

I was very tempted to curl up in a ball and wish the conversation away.

But . . . I finally bought a Kindle after years of resistance (dammit, I am a book lover! I shall not surrender my adoration of paper for something I can’t dog ear without electrocuting myself!) and discovered that I really enjoyed the damn thing. The great appeal was that I could get ahold of reams of classic pulp literature for only a few bucks. I bought all the Tarzan novels — even Tarzan and the Castaways, which is an uncommon entry in the series — for $3.99. I bought all of Clark Ashton Smith’s short stories for the same amount. And anything in the public domain — bang! Free.

In the midst of this new Kindle owner madness, I thought I might give this whole new-fangled ebook publishing thingy a try.

Two things pushed me to from “might try” to “will try.” The first was a good friend of mine who charged into e-publishing with every weapon known to him firing. He set up a new and elaborate website, made an expensive book trailer, released a slew of short stories along with a full novel, got blurbs from some major writers (and me) for his promotional kit. He was making an assault. Some of his energy rubbed off onto me. But didn’t want to release a full novel, since I have an agent and a book making the rounds at traditional publishing houses and I still wish to see how it develops.

That’s where the second factor came in. I was having trouble finding markets for “Farewell to Tyrn” because of its length. Most magazines won’t look at stories above 7,500 words. Novelettes and novellas are tough sales. But . . . an ebook seemed like the perfect place to publish a novella. Priced at 99¢, a short work might reach more readers than a small magazine. And even if I only made 35¢ per copy (Kindle books have to be priced at $2.99 or above in order to receive 70% royalties), if I managed to sell over an extended period of time, the story would generate more money than a sale to a semi-pro market. Hell, if I sold one copy, it was more money than a “For the Love” market. I had no illusions about getting rich doing this, despite the stories of some of the more successful self-published authors pulling in six figures in a year. I just wanted to get one of my favorite of my own stories out where people could read it, and perhaps get a few dollars for the effort.

The first step I took was to contact Fred Jordan, the artist who did the illustration for “An Acolyte of Black Spires” in Writers of the Future Vol. XXVII, and asked if I could hire him to create the cover art for “Farewell to Tyrn.” Once he said “yes,” I was committed to doing the project. Getting good cover was crucial — I learned this much from the deluge of information about self-publishing that washed over me during 2011.

It took two months for me to have “Farewell to Tyrn” ready to go. Most of that time wasn’t spent formatting; it was doing research on the ebook market and figuring out how to do promotion. I developed my Twitter following (I had done almost nothing on Twitter until now, even though I created an account two years before), re-did my website, signed up on forums, looked for reviewers, and read and re-read all the guides I could get ahold of. Mark Coker’s Smashwords Book Marketing Guide was the best source information; although Coker deals specifically with Smashwords, the marketing tools he offers apply to any format.

Fred finished the artwork — which stunned me when I saw it — and then a friend did the cover design for free. After a week of driving myself crazy with the fear that I had forgotten some important step and the whole enterprise would crash down in a flurry of 404 Error Pages, I got “Farewell to Tyrn” uploaded onto Amazon and Smashwords, along with blurbs and links. Yesterday, I went “live” with announcements on my website, Twitter, and Facebook. I then spent the whole day in a daze as I drifted around the Internet seeing if anything was happening.

Here I am, a day later and five bucks richer. And still with no clue where this will lead to. Except that I’m already planning to publish an ebook collection of stories based on another novella I wrote that has no market.

Maybe the moral of all this is that the novella is alive once more, thanks to ebooks. That’s good news for me, since writing stories under 10,000 words is something I can rarely achieve. (The last novel I wrote started as a short story with a word-count goal of 5,000 words. The novel is currently 112,000 words.)

i find the girl in the cover very interesting. She’s not your typical design. I hope everything goes well

Good luck, Ryan! I’ve been inching toward getting the first collection of my own serial ready to go as a self-published e-book, and I know how much work it is getting it together — editing, cover art and all. Congratulations on getting the thing accomplished, and I hope it does really well for you!

I hear many promising things how novellas do in electronic edition. Admittedly, you couldn’t tell that by how my own novellas did with a tiny press that has now gone to the sweet afterlife of small presses. As another writer who can’t seem to avoid going long, I’ve come to love the novella form, so I really hope ebooks make them economically beneficial for writers. The ebook has already made it possible for writers to get novellas in front of readers, sometimes not at a loss, and hey, that’s a better situation than we had before.

I’m in the process of self-pubbing a story in POD as a charitable fundraiser. The story started as an accidental serial on my blog a few years ago, so before it was even finished it counted as previously published. So I released it into the wild with a Creative Commons Share Alike license, made a free podcast of it, and now I’m working with a friend on formatting it for Lightning Source. If it makes any money for the charity, yay. If not, we’ll have learned some useful stuff about self-pubbing with a story I couldn’t have sold anyway. Everybody wins.

I’m pretty sure that’s the best cover I’ve seen yet for an ebook, kudos to the artist!

Just picked up a copy of Farewell, thanks so much for sharing your thoughts on the ebook world.

Fred Jordan is really an amazing artist, I’m glad to be associated with him early in his career because I think he’s going places.