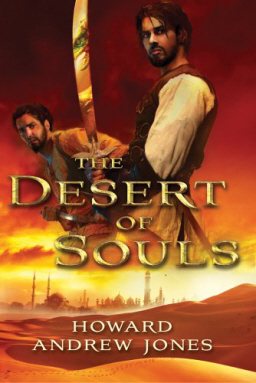 Howard Andrew Jones’ debut novel The Desert of Souls is finally available in trade paperback, with a brand new cover by Scott Grimmando.

It’s been a busy week for our Managing Editor. Yesterday we told you Thomas Dunne Books had released the cover art for the sequel, The Bones of the Old Ones, and announced a release date of August 21, 2012.

And less than two months ago Howard published The Waters of Eternity, an exciting collection of stories featuring the heroes of his first two novels, the intrepid Dabir and Asim — including two stories that first appeared in Black Gate.

Here’s just a sample of the praise the novel received when it first appeared:

“The Desert of Souls is filled with adventure, magic, compelling characters and twists that are twisty. This is seriously cool stuff.”  — Steven Brust

“A grand and wonderful adventure filled with exotic magic and colorful places — like a cross between Sinbad and Indiana Jones.”  —Kevin J. Anderson

The Desert of Souls, 320 pages of action-packed Arabian adventure, is available from St. Martin’s Griffin for just $14.99.

This is not a negative comment as i think this current cover will help the sales but I much prefer the cover by Mr. Keegan. That is just more personal preference than anything else.

The Grimmando cover does better illustrate what actually happens in the book though.

I’m interested as to why you changed the cover. Was it a marketing decision? I really like how the two covers seem to be geared towards two different audiences.

Just me being curious is all none of this is ridicule.

I didn’t ask to change the cover — it was ALL marketing. But I understand the new look has already helped increase placement, so I’m pretty pleased.

I’ve been currently reading “Desert of Souls” (I’m on chapter 7, of the HC edition, although both covers look great) and was wondering if “Waters of Eternity” will be released in print sometime in the near future…

Awesome new cover, I especially love the reflected monstrosity in the blade! 🙂 That one little touch makes my soul happy.

There are no current plans for a print re-release of Waters of Eternity. Perhaps, if sales go well, these and some other short stories that are planned but unwritten might all be collected in dead tree format. For now they’re only available electronically. Sorry!

[…] Martin’s Griffin re-released Howard’s The Desert of Souls as an attractive trade paperback last week. A new release means additional chances to capture attention and generate buzz, so I was […]