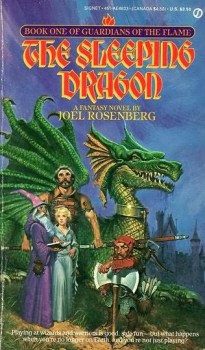 I was a fan of Joel Rosenberg’s work long before I ever met him, but I eventually came to admire him more as a man than as an author. I wasn’t a close friend of his, more the friend of a friend, but I did have the good fortune to get to know him over the last 15 years. It was a privilege for an SF/F fan, but more than that, it was a genuine pleasure. Growing up in Minnesota, which at the time felt rather like the cold side of the back of beyond, I had no idea that there were Real Live Writers living there, never being much inclined to read the author bios at the back.

Like many a teenage boy in the Eighties, I had dabbled in role-playing games such as AD&D, Gamma World, and Traveller in the Time Before Girls, and so The Guardians of the Flame were a real revelation to me. Rosenberg’s novels were gritty long before grit became fashionable; he made a distinct impression on a young reader by killing off a major character practically at the beginning of the first novel, then went himself one better by killing off the lead character in only the fourth book in the series.

I can’t recall being more shocked while reading fiction any time before or since. Karl Cullinane is dead? But… but what will happen to the series?

I also read his excellent Metzada short story, “Cincinnatus”, either in a magazine or one of the anthologies in which it was collected, although I don’t think I knew it was Joel’s until years later. But if I wasn’t his biggest fan, his work nevertheless made a lasting and indelible impression on me. 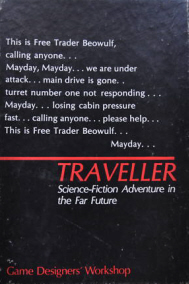 A few years later, during my junior year in college, I began dabbling in writing. While my initial stories were unpublishable Asimov magazine-style short stories with punchlines, I eventually began writing my first attempt at a novel, a Rosenberg-inspired story which involved a group of Traveller players who found the boundaries of reality between them and their characters to be gradually fading.

Partly because the Traveller adventure involved was Double Adventure #3 Death Station/Argon Gambit and partly due to my own morbid inclinations, the novel rapidly devolved into a dark horrorfest of drugs, sadism, and madness, and I gave it up about a quarter of the way through. (Death Station was, in some ways, a thematic precursor to the Reavers of Firefly.)

Despite that failure, it was the first time that I felt as if I was beginning to understand how a successful author went about constructing a novel and turning an idea for a story into a coherent structure. It was the first time I began to believe that I could actually realize my hazy daydream of one day becoming a fantasy novelist.

I happened to meet Joel about ten years later, through our mutual friend Bruce Bethke, an award-winning SF writer in his own right. Joel was a sometime member of a group of Minnesota writers who had assembled a writer’s group patterned after the famous Inklings of Oxford, and if their names aren’t quite as historically illustrious as the originals yet, they are certainly more prolific. 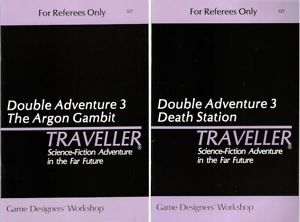 Lois McMaster Bujold, Pat Wrede, Bruce, Joel, and Peg Kerr were the writers I remember there, although there were two or three other members as well. I was only a temporary guest associate as they were collectively attempting to help Bruce and I lift a game tie-in to a respectable level of science fiction mediocrity, which really wasn’t bad for a game novel at that time.

And while I never joined the group, Joel and I hit it off well enough that we stayed in contact and talked from time to time about our shared interests in firearms and history. I didn’t dare tell him that my first attempt at writing was a blatant imitation of his own best-selling work for several years and when I finally did tell him about it, he just threw his head back and laughed.

Although he didn’t wear it on his sleeve, Joel’s Jewish heritage deeply influenced his views on the importance of self-defense and human liberty, which in his final years were probably better known to the public in Minnesota than his fiction. His Metzada books were his imaginative, science fictional expression of a “Never Again” mentality that was cemented by his personal experience with a nighttime shoot-out in his own house with a home invader. 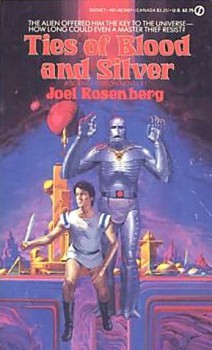 I’ll never forget when we went out shooting together one evening with our wives and he examined my fancy semi-automatic with its glow-in-the-dark tritium night sights before handing it back to me with a dismissive shrug. “They’re pretty, but if you ever find yourself in an actual shootout with it, I guarantee that you’re not going to be actually aiming them at anyone,” he said. Thus spake the voice of hard experience.

Despite his skepticism about the nighttime utility of gun sights, he was a good shot. He taught carry classes for those obtaining their licenses and by all reports he was a good and thorough instructor who placed a strong emphasis on safety. The other thing I remember about that double-date at the gun range was the way he encouraged my wife to try various guns in order to find one that best suited her.

To do this, he informed us, one simply held the pistol with both hands in a natural, relaxed position in front of one’s chest and fired at the target without even seeking to aim it. When her first blind shot from a laser-equipped 9mm nailed the profile target right in the middle of the forehead, Joel didn’t even crack a smile, but merely nodded approvingly. “Yeah, I think that’s the gun for you,” he told her. “And you don’t need that laser.”

I don’t think Joel was ever very comfortable as a New York Times best-selling author expected to write and rewrite variants of the same best-selling book over and over again. We never talked directly about it, but I had the impression that he killed off Karl Cullinane because he didn’t want to be locked into a formula for the rest of his literary career. I’m not entirely sure he would do it again if he had the choice, given the way in which he was never able to rescale the glorious and lucrative heights of best-sellerdom, but he never expressed any regrets about it either, at least not to me. According to many who came into contact with him, Joel could be difficult from time to time, although I always found him likeable and very easy to get along with. He was certainly always willing to lend someone a hand. He helped me with my first solo novel, encouraging me to lose all the “thees” and “thous” that he quite kindly explained I hadn’t mastered yet. And I was far from the only inexperienced genre author that he helped steer away from the rocks of overwriting or whose career he materially assisted.

But most importantly, Joel was deeply and genuinely dedicated to “the Flame”, by which he meant the flame of human freedom. That dedication was why he deliberately walked into a police station legally carrying a gun in the full knowledge that the police officers might be inclined to ignore state law and harass him for doing nothing more than exercising his legal rights. Regardless of whether one thinks his actions were heroic or foolish – and I am myself inclined towards the former – there is no doubt in my mind that he did so for exactly the same reason that his Guardians were always battling against evil in the form of slavery, even at the cost of their lives.

I don’t know with any degree of certainty that the strain of losing his job as a result of his illegitimate arrest and the pressure of his subsequent legal problems played any part in the massive heart attack that killed him, as he wasn’t in what one would describe as the best of health, but regardless, Joel Rosenberg died as he always wanted to live, as a fighter. When his beloved wife of 32 years, Felicia Herman, sent out an email informing friends and acquaintances of his death, she didn’t describe him as an activist, or even a writer, but as a husband, a father, and a mensch.

Joel Rosenberg is gone. But his words remain, and in them, the warrior lives.

Very sad the death of this writer and friend of you but is not a very good form or way (sorry for my english) to defend freedom go to a police station with a gun even when is legal in the state.

I enjoyed his books and am humbled by the sacrifices he made in defense of our personal liberties. May he R.I.P.