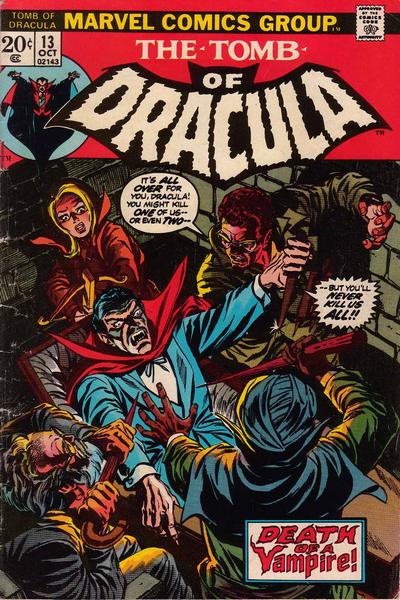 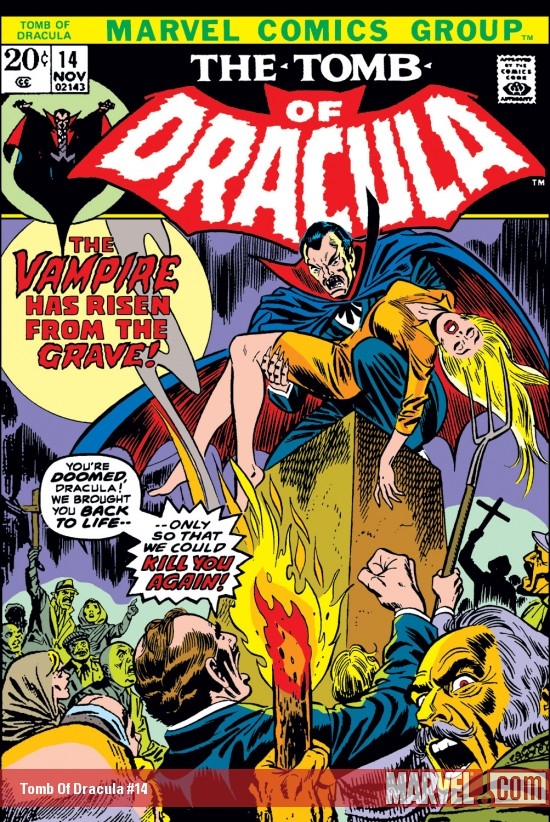 The Tomb of Dracula # 13, “To Kill a Vampire” really delivers on the promise of Marv Wolfman’s continuing storyline. Quincy Harker , Rachel Van Helsing, and Taj Nitall are overcome with grief over the loss of Edith Harker. Frank Drake is consumed with rage for his hated ancestor and Blade has no patience for their grieving and is eager to take the reins of the group or resume the hunt for Dracula alone. Clearly the group will continue to have issues functioning as a collective thanks to Frank and Blade’s respective personalities. Meantime, Dracula continues his reign of terror in London while an unseen Chinese criminal genius, Dr. Sun dispatches his minions to the morgue to reclaim the body of the vampire Brand.

There is a nice bit where Dracula attends a prize fight and is sickened by the spectators’ reactions to violence as entertainment. He fails to appreciate boxing as a sport from the perspective of the medieval conqueror he once was or the predator he has become. Following Edith’s cremation, there is a quiet interlude among the group of vampire hunters where Blade reveals his origin. His mother was killed by a vampire while giving birth to him. That one brief flashback provides all the information the reader needs to understand the character, his anger, and what drives him to obsessively hunt vampires. Again, Wolfman’s masterful skill with characters combined with Gene Colan’s stylish art sets this series well above the standard maintained by most comics of the era.

The issue races to a breakneck conclusion with Harker and his band of vampire hunters following a lead that takes them to Dracula’s hideout. The ensuing battle is particularly vicious. The vampire apparently has the upper hand thanks to his strength and supernatural powers when suddenly and unexpectedly Blade puts a knife through Dracula’s heart and kills him as the issue comes to an abrupt finish. 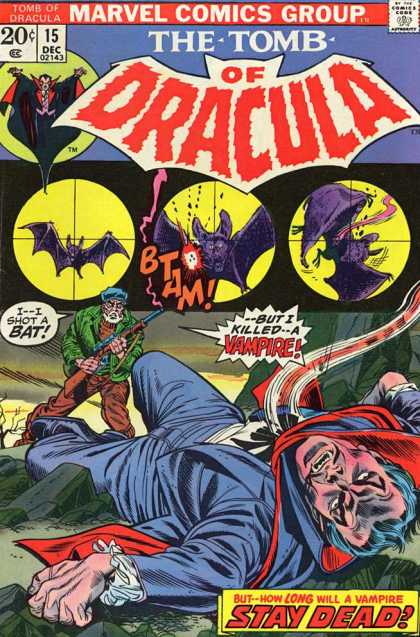 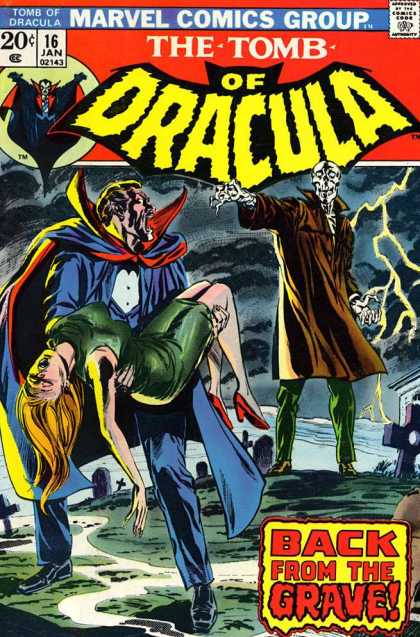 Issue 14, “Dracula is Dead” picks up where its predecessor left off. Dracula is dead, but the townspeople under his mental control break into the house and bear his body off, easily overwhelming the vampire hunters’ efforts to stop them. Meantime, Dr. Sun’s minions bring the body of the vampire Brand to Dr. Sun’s laboratory (a set right out of Universal Pictures) where the vampire is revived. Meantime, the sight of Dracula decomposing in his coffin is enough to break the townspeople free from the vampire’s telepathic control. They flee in terror at the sight.

The vampire lord is not left to decompose for long as a down-on-his-luck preacher named Josiah Dawn stumbles upon his remains and takes it as a sign from God. Unfortunately, the preacher removes the knife from the vampire’s chest during a revival meeting and Dracula returns to life. This is the first time Gene Colan portrays the character in true demonic form. Dracula’s contempt for the preacher and his followers is horrible to behold. The issue ends with the vampire triumphant that he has cheated death once again as he flies off in the night leaving the forsaken Christians behind.

Issue 15, “Fear is the Name of the Game” is a surprisingly impressive effort beginning with Dracula in his rat-infested crypt updating his journal concerning a recent encounter with a hunter in the forest who Dracula left as prey for the wolves and rats at his command. This is followed by Dracula recounting a recent encounter with a husband who murders his wife before she can divorce him for his infidelity. Dracula attacks the wife just before death offering her both eternal life and revenge on her husband. The wife returns as a vampire and has her revenge on her unfaithful husband and his mistress. Dracula then recalls a nearly-fatal encounter with a 1700 year old Roman whose life has been prolonged by bathing in a pool of cursed blood. This is followed by a more recent episode set in 1969 when Dracula encountered a Scottish member of Quincy Harker’s vampire hunters. While this episodic issue is very much filler, it does provide the reader with a deeper sense of Dracula’s character and his perspective on his centuries-old existence and helps explain why he no longer considers himself human.

1ssue 16, “Return From the Grave” is a wonderful pulp yarn featuring a living skeleton dressed in fedora and Mackintosh who kills anyone who stands between it and the contents of a safe it sets out to rob. Inspector Chelm of Scotland Yard returns to the series heading up the investigation. Dracula’s reign of terror in London brings him into contact with the living skeleton that refuses to stay buried. While the denouement is a typical supernatural explanation for the dead who cannot rest, Colan’s artwork and the welcome return of Inspector Chelm make the story transcend the limitations of the genre.

As an aside, Wolfman continues to develop the Dr. Sun storyline with the evil Doctor’s voice being heard commanding his underlings who have revived the vampire Brand. Creating this Fu Manchu-like villain and leaving him an unseen criminal genius recalls the use of Blofeld in the early James Bond films as the suspense builds toward the inevitable first appearance of the character and the conflict that is sure to follow. 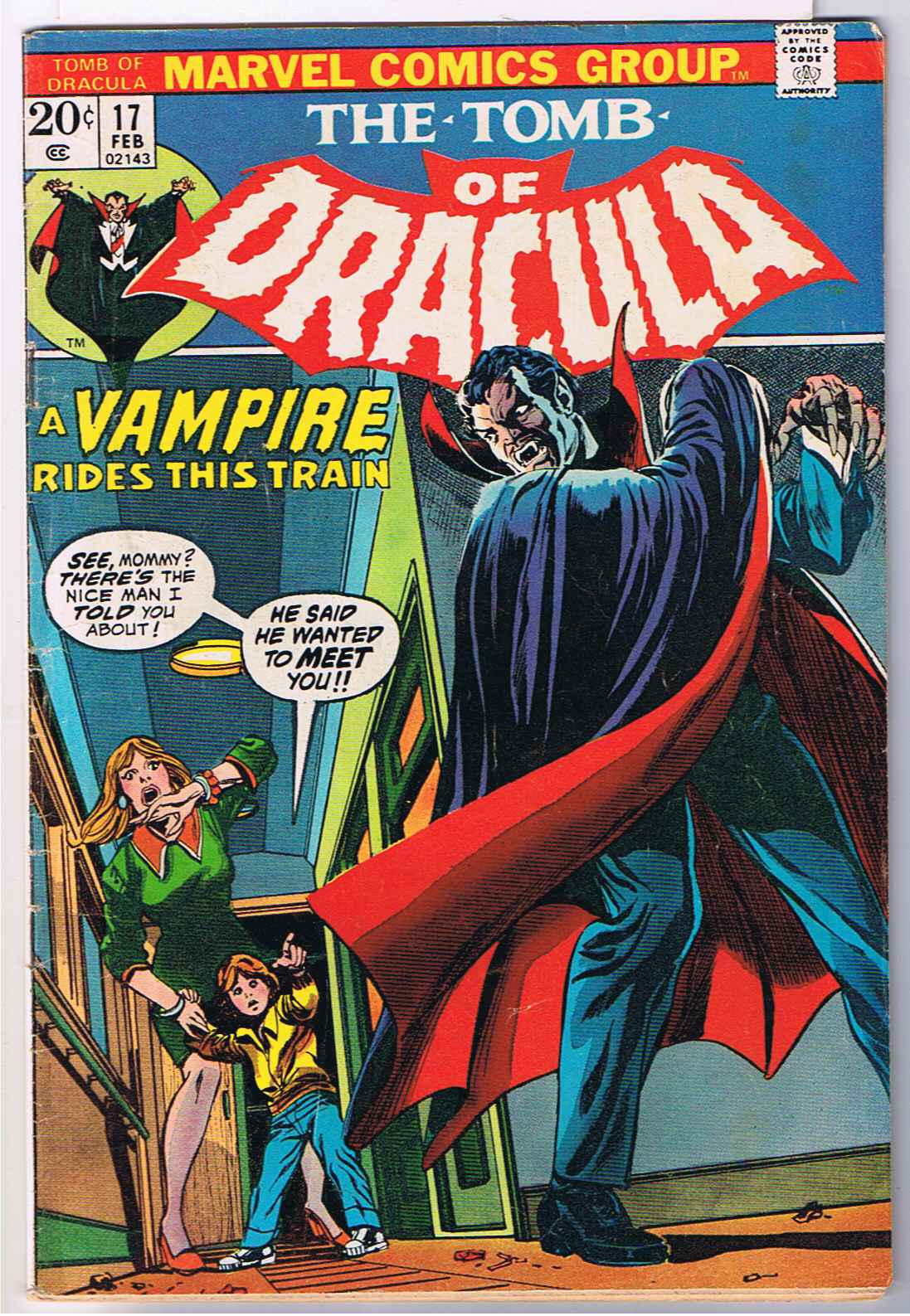 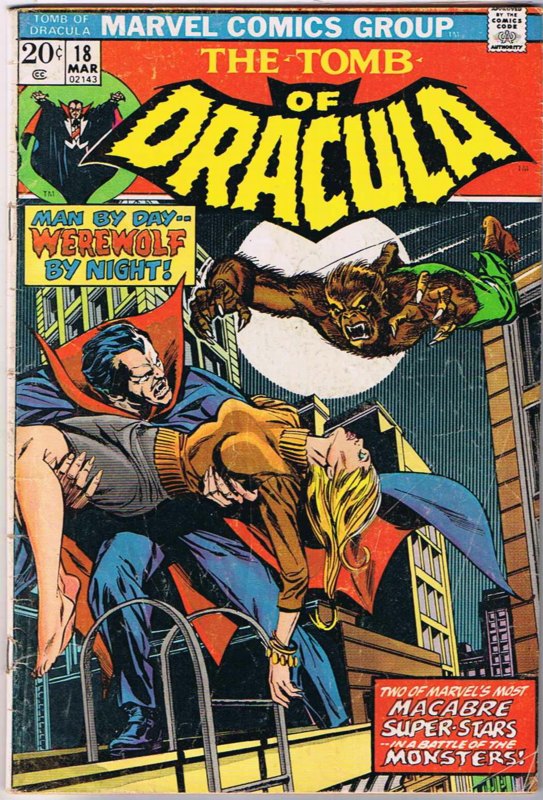 Issue 17, “Death Rides the Rails” gets things back on track with a vicious encounter between Blade and Dracula in a Paris alleyway. The vampire leaves Blade for dead. Dracula then boards a train in Munich, the same train that Frank and Rachel are coincidentally travelling aboard along with Jack Russell (star of Marvel’s Werewolf by Night horror series), and some minions of Dr. Sun who have defected. Despite the unlikely coincidences of all these characters accidentally converging, Wolfman makes the most of the material by having everyone believe the others’ presence is conspiratorial. Dracula is convinced the defecting agents of Dr. Sun are members of Quincy Harker’s vampire hunters while the defectors are convinced that Dracula is a pursuing agent of Dr. Sun. This is an exceedingly violent issue, but the farcical situations never appear less than deadly as Wolfman’s script and clever dialogue match the finesse of Ian Fleming at his peak. The result is the closest one can likely come to a Hitchcockian Dracula tale. A brief interlude shows the resurrected vampire Brand demonstrating his strength to his new master, Dr. Sun.

Issue 18 leads into a crossover with Werewolf by Night #15 with Jack Russell and his psychic girlfriend Topaz riding the train to Transylvania unaware of what transpired between Dr. Sun’s agents, Frank and Rachel, and Dracula. The vampire lord has returned to reclaim his ancestral castle and there is a nice bit of Dracula raging before a portrait of his mortal self when he ruled Wallachia before turning melancholy when finding a portrait of his late wife.

The action switches briefly to Paris where Quincy Harker finds Blade’s corpse in an alleyway and prepares to stake him for fear he will rise from the dead as a vampire. Jack and Topaz arrive at a Transylvanian inn and quickly run afoul of the locals. Jack transforms into a werewolf and causes some mayhem. The duo are in Transylvania to locate the Book of the Darkhold, an occult tome that Jack hopes will cure him of his lycanthropic curse. Naturally, the book is in Castle Dracula leading to the climactic battle between the two horror icons.

Werewolf by Night #15 is a true disappointment with Mike Ploog’s artwork paling in comparison to Gene Colan. Marv Wolfman’s script seems robbed of all its richness without Colan’s dignified lines to bring the visuals to life. The important development to the werewolf-vampire battle on the grounds of Castle Dracula is the arrival on the scene via helicopter of Frank and Rachel. The climax has Dracula clinging to the helicopter as Rachel, in possession of the Darkhold, makes good her escape. It makes for a fitting cliffhanger for the next issue of The Tomb of Dracula.

Another great post, William, and your writing is inspiring me to go back and read the comics, always fun. I think these issues showed Wolfman figuring out what he could do with the character and the series. The stories have some holes, I think, but you can see them beginning to get stronger, touching on deeper themes — and Colan’s art is consistently brilliant.

The three-parter that kicked off with the death of Edith Harker worked well enough, and the Josiah Dawn angle was unexpected, but it’s an example of a story where I kinda wondered about the plot details — how did Dawn get all those people back to his meetings so quickly, why didn’t the Harker gang visit him before the big show, stuff like that. On the other hand, the thematic contrast between Dawn and Dracula was obvious, and well-done; it reads like Wolfman had a good idea for the final confrontation, and built the story backward from there. I think this may have been the first real exploration of faith and religion in the book, as well. (And, incidentally, what a great panel Colan drew of Drac preparing to bring down the lightning on Dawn; like something out of Sienkiewicz in its use of light and shadow.)

I actually think in some ways #15 was a breakthrough for the colour comic. Wolfman began using the stories he was writing in the black-and-white Dracula Lives! magazine to give his main character a real sense of past, a history and a distinctive personality. I think it was in this issue we also began to see Dracula musing about immortality, and how he viewed himself as separate from humans. Of course, the anthology format was something Wolfman would come back to, from time to time, often to great effect.

The Doctor Sun sub-plot developed in an intriguing way, but moments seem hurried — 17 was really frustrating for that, I felt. I liked it less than you, I fear. Good idea, with the characters all on a train, as you note a very Hitchcockian set-up with some nice twists, but the mechanics of their interactions seemed off, to me. And the Werewolf/Dracula clash didn’t quite work as well as I’d hoped; I like Ploog’s art more than you, but there’s no doubt his style is much more cartoony than Colan’s, which is mostly effective due to its realism. Still, there were good moments in there; look at the flashback in the Werewolf issue — good use of horror iconography, I thought.

But the nice thing about the book in these early issues was that it just kept getting better. Looking forward to reading more!

Good points as always, Matthew. I came across hard on Mike Ploog. I’m actually a fan of his artwork (particularly on Marvel’s MONSTER OF FRANKENSTEIN), but felt that seeing his art next to Gene Colan only reinforced how essential Colan was to the look of TOD. Likewise the issues without Tom Palmer are an enormous distraction to me. I agree there were times when Wolfman in his first dozen issues (like his predecessors) clearly appeared rushed as if the scripting were done against a punishing deadline. There was an overreliance on coincidences and too many occurrences of sloppy plotting early on. Happily that disappears once Wolfman settles into the series and puts his own indelible stamp on the characters.