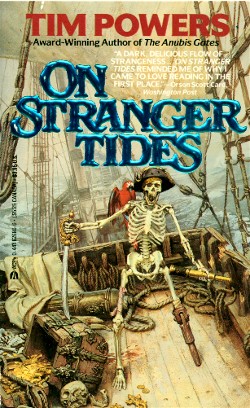 The film throws this rich Caribbean mythology out the window: Ian McShane’s Blackbeard simply has a magic sword and it’s never clear if his grotesque zombie officers are the undead or what. The conniving loas are gone. Nor are there any ship-to-ship battles (Powers has a wonderful engagement in the first chapter: “From out across the blue water rolled a loud, hollow knock, like a large stone dropped onto pavement. Curious, Chandagnac… was distracted by the abrupt white plume of a splash on the face of the sea, a hundred yards ahead to starboard.”). Alas. But I knew a faithful adaptation was not in the works when I read that “Entire characters were added at Depp’s request.” So if the film is mediocre, it was the star who kept it from outright disaster. 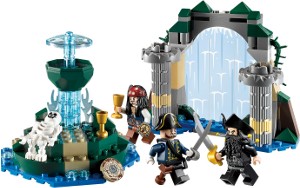 Perhaps the oddest result of Disney buying the rights to the book is that their partner Lego has released a line of sets recreating scenes from the film. Which means there are now Lego sets based, in part, on a Tim Powers novel. Take a moment to wrap your head around that.

Hey Jackson – a fine review. Nice to see some love for ON STRANGER TIDES. It’s one of the novels I mention in my editorial in BG 15.

As for nautical fantasy, I’d also love to review of Robin Hobb’s MAD SHIPS some time…

We saw Rodrigo y Gabriela in concert in Baltimore the year before last–awesome!

Not all reviewers are giving the movie bad reviews. My most trusted critic, meaning the one whose tastes seem to most closely align with my tastes, is Richard Roeper, and he gave it a B+. (And he thought Inception was the best movie of last year, which definitely aligns with my tastes.)

I loved the book On Stranger Tides. I had no idea what it was going to be about when I picked it up to read (after discovering Powers’ Last Call) but I found it a great adventure story.

There is a Lamb collection titled Swords From the Sea that has 7 or 8 Viking stories, a search for the northEAST passage by English explorers, an overland expedition to fight the Barbary pirates, and a couple of other goodies, though no actual Carribbean action.

I love Mieville’s The Scar. Good review/ article by the way.

Joe Morgenstern at the WSJ, whom I generally trust, excoriated the movie. I tried to find a copy of his review to link to, but apparently the WSJ doesn’t archive his stuff. Anyway, it’s not as bad as he said.

Definitely will check out Swords From the Sea and The Scar.

The week that the new Pirates of the Caribbean opened, I was walking along Hollywood Blvd. with Tim, helping him carry his pack of Cokes from the convenience store over the the Writers of the Future Workshop. All of Hollywood Blvd. was plastered with enormous Pirates of the Caribbean posters (it was opening at the El Capitan, which Disney owns) and huge props that dwarfed most of the buildings. You couldn’t escape seeing it every place you looked.

So I turned to Tim and asked him, “Hey, do you ever want to stop somebody on Hollywood Blvd. and point up at one of these massive signs and say, ‘Hey, that’s mine! That’s based on a book of mine!’?”

I thought he would say ‘no,’ since of course the movie was only loosely based on the book. But his face just brightened up, and he said, “Yeah! It’s so weird. I made up that phrase, ‘On stranger tides,’ and now it’s all over the place.”

Tim is such a cool guy.