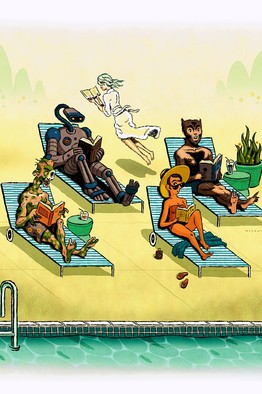 Something strange is happening to mainstream fiction. This summer, novels featuring robots, witches, zombies, werewolves and ghosts are blurring the lines between literary fiction and genres like science fiction and fantasy, overturning long-held assumptions in the literary world about what constitutes high and low art.

Leave it to a mainstream publication to finally catch on to something that has been happening for, oh, a few decades now, as a “summer phenomenon.”

To be fair, the author does note that such a distinction between the use of the fantastical in so-called high and low art is a modern (20th century) sensibility. Whether Lev Grossman, author of The Magicians and its (surprise, surprise) forthcoming sequel, is right that genre fiction is becoming mainstream is perhaps less a concern than whether mainstream success is ruining it for those of us who value genre precisely because it is not mainstream.  Though that may be a reverse snobbery more pretentious than the editor quoted about the forthcoming, and expected blockbuster, The Last Werewolf :

“We’re Knopf, we don’t do those kinds of books,” says editor Marty Asher. “I got completely sucked in despite my better judgment.”

Okay, that Knopf editor’s comment does sound awful at first, but remember that Knopf doesn’t know how to sell kinds of books it has no history of selling.

Though I’d be completely honored and thrilled if Knopf wanted to publish a volume of my poetry, and it would probably do as well there as poetry does anywhere, I wouldn’t want them to publish my epic fantasy if I could place it with a house that had a long history of selling such books successfully.

Good luck to the werewolf-author and the werewolf-editor. I hope Knopf’s marketing department finds a way to do right by that book.