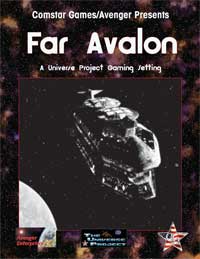 In honor of the coming conclusion of Howard Andrew Jones month (no relation) here at Black Gate, we present another fine game review from his vast oeuvre of gaming reviews in Black Gate 14.  This review is an interesting contrast to his earlier review of the space adventure game Traveller.

Martin Dougherty’s one of the best writers that Traveller’s ever had. He’s been responsible for a number of outstanding supplements, from introductory adventures like the deceptively dully titled Type-S to Mongoose’s new Spinward Marches – a book wherein Dougherty had to bring 16 subsectors of Traveller space to life – to the truly phenomenal, and sadly out-of-print-too-soon Gateway to Destiny supplement from QLI. Martin has a knack for bringing his places to life with interesting challenges and adventure hooks, even canon Traveller worlds that long seemed dull in the hands of other writers. I think highly enough of his work that I go out of my way to read new supplements with his name on it.

Far Avalon is a game setting with sectors and spaceships, but it’s not Traveller.

It’s a system-light labor of love adaptable for any science fiction role-playing game and the first foray in a new venture. It’s flavorful and information dense, perfect for someone who loves the feel of canon Traveller but wants something a little different.

Far Avalon’s premise is that mankind has been out exploring the stars via both star drives and conduits, naturally-occurring star gates that enable journeys to distant start clusters. A few years back, the conduit that leads back to sectors connected to Earth simply stopped working, leaving the Far Avalon sectors on their own. And that’s part of the allure of Far Avalon, one that Traveller fans might especially appreciate. Here, a single ship can change the course of history or affect the fate of worlds because there are no huge empires and mighty fleets lying just off the map edges.

The setting is as rich as I would expect from Doughtery. Each star system gets a write-up: that’s almost 150 pages of setting description, with political situations, environments, and any interesting details that could lead to adventure. That alone is impressive and enjoyable work, and the kind of campaign building extremely useful to game masters. There’s much more, though. Far Avalon features two interesting twists on information presentation in a science fiction setting. Doughtery has developed a nice shorthand for world descriptions. For instance, if a world is described as a brown world, it’s habitable, but has an issue, delineated further by a condition like desert, or low gravity, or filter required. If it’s a gray world that means the environment is even more challenging and humans can’t live there without environmental suits or domes. Then there are rockballs and iceballs, and the rare Earth-like green worlds. It’s an efficient and descriptive shorthand that’s frankly easier to grasp than standard Traveller designations. Douhgtery’s discussion of the mechanics behind space travel was especially inventive and interesting and could well serve as background for a science fiction series.

Far Avalon provides data on nine sectors of space, most with at least several dozen worlds, then gives an in-depth look at Far Avalon itself: history, culture, land features, trade data, countries, and even more detailed information about the starport where player characters are likely to visit, all-and-all more than 50 pages on this setting alone. All of this, together with an extensive discussion of ships, background history and details, a few dozen pages of adventure and campaign suggestions, makes Far Avalon an extremely thorough campaign guide.

There are a few things it does not provide – Far Avalon is a setting, not a rules system, and will therefore be of far more use to game masters already happy with a system than it will be to players. While ships are described in detail, there are no deck plans, which might disappoint those who aren’t aware that deck plans are almost ubiquitous and easily adapted from other sources – and might not be quite right for the way Far Avalon sees space travel in any case. Lastly, if you want a quick read that will get your campaign launched for a night of space opera, this isn’t the book for you. If, however, you want a lovingly crafted setting that could provide a framework for years of adventure, one that can be read and savored and introduced gradually to players, you’d be hard pressed to do much better.

Howard Andrew Jones (again, no relation) is the managing editor of Black Gate magazine. His first novel, The Desert of Souls, is now available, featuring characters who were introduced within the pages of Black Gate. His second novel, Pathfinder Tales: Plague of Shadows, is due out in March. You can find out more about his active writing life at his own website, HowardAndrewJones.com.

I’ve created characters for Traveller, but never actually played them. For some reason I was always taken in by the romance and shine of Star Frontiers instead of the grit of Traveller. Still, I appreciate any sci-fi game out there, especially one as old and diverse as Traveller.