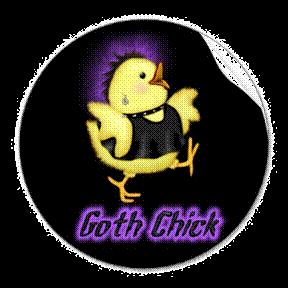 It was one year ago this week that I moved into the underground offices beneath Black Gate headquarters and began tackling the challenges of a new job. As I’m sure you can appreciate, those early days were a singular challenge. First there was the task of getting all the boys around here to put the toilet seat in the down position, and then the tedious undertaking of choosing the first group of interns — and assigning them to clean the various science experiments out of the communal refrigerator. To say nothing of the effort needed to find new locations for all the cleaning supplies, so I could make space for my desk and drink blender.

Given my initial reception from the other staff members, I was struck with the sneaking suspicion that our editor and chief, John O’Neill, may not have been completely forthcoming in describing the scope of my new role. For instance, several of my fellow staff members kept dropping by to inform me the coffee maker was smoking from lack of coffee, or that the bucket under the leak in the ceiling was overflowing.

In spite of these numerous inane interruptions, I set about to do what John had asked of me: bringing my “unique skills to bear on the daily challenges of the Black Gate team.” True that the staff was certainly a tad heavy on boys wearing shirts with Star Trek quotes, and a sci-fi convention anywhere in the world left the phones unanswered and the mail piling up. It was therefore my task to equalize this imbalance by doing exactly that which I excelled at: Throwing mocking, dark, threatening female sarcasm right into the center of the Enterprise bridge known as Black Gate. So, for your amusement (as well as my own), Goth Chick News went live in November, 2009.

Since then, we’ve stalked former child celebrities, hunted ghosts, watched some cool indy horror films and talked about classically creepy stories. Along the way you haven’t just been my silent audience, but instead have chimed in with your own experiences and commentary, proving that those of us just a bit left of center are numerous and vocal.

It is therefore with a sense of pleasure second only to the sound of an intern brewing up a triple shot latte, that I bring you a selection of my favorite letters and comments from the past year.

If you don’t see yours here don’t despair, as yours was likely thoughtful and insightfully written. These are just the ones we made the most fun of.

I really liked what you wrote about real vampires last week. My girlfriend is obsessed with the Twilight movies and books. What should I do?

First off, no one dating someone obsessed with Twilight gets to call themselves “goth” anything, least of all “guy.” Ditch her at the nearest Hot Topics store and proceed immediately to your local indy movie house to attend a midnight showing Night of the Living Dead, where you’ll meet someone with a real personality. 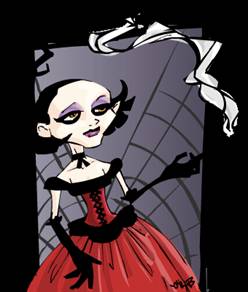 Your interview with Ed Douglas from Midnight Syndicate had some great insights on how someone could get their own script made into a movie. However, he’s also the only person you’ve interviewed more than once. I think you’ve got a mainstream thing for musicians.

What I have a “thing” for is people like Mr. Douglas with versatile talents. And did you just call me “mainstream?” Please peruse my entry about my voodoo doll collection. And I hope that pain in your left kidney isn’t anything serious.

I LOVED your interview with Cary Guffey, the little kid who played “Barry” in Close Encounters of the Third Kind! It must be cool working for a magazine and being able to rub elbows with Hollywood royalty.

Though it is true that the interview with Cary Guffey was indeed amazing and entertaining, I feel it necessary to point out that CE3K was the only movie Mr. Guffey ever did. He is now an investment banker perhaps living something like royalty in the Midwest. Please note that elbow-rubbing of any kind is highly discouraged in the Black Gate offices, for sanitary reasons. 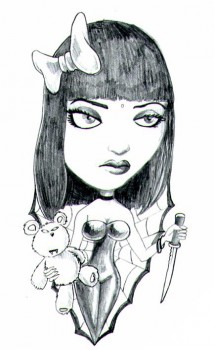 My friends and I always throw down obscure movie quotes just like you talked about in your last post. Here’s one I bet you won’t get:

“I would kill for you, I would die for you, either way what bliss!”

Don’t insult me. 1991, The Addams Family movie; Gomez to Morticia while they’re sitting in the graveyard discussing how they met.

“More human than human’ is our motto”

I look forward to your awesome posts every Thursday. Can we go out to a horror movie together sometime? I can tell we’re into the same stuff.

So faithful readers, I appreciate you coming along with me on this weird and wonderful year-long trip to the dark, icky places. If you promise to keep the comments coming, I’ll promise to keep providing you with strange stuff to comment on.

See you on the night road.