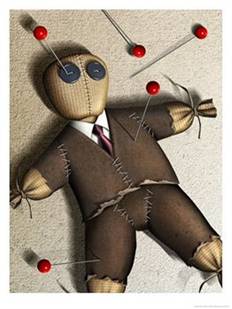 I have a friend who collects Star Wars paraphernalia. He travels around the country a few times a year attending mammoth SciFi conventions and comic trade shows, in the frenzied remainder of the hunting and gathering instinct that evolution allowed us to keep. The dedicated room in his house where this amazing assortment of merchandise is displayed has its own security system, in place at the request of the insurance company that covers it with a policy of biblical proportion. His Facebook page is a plethora of friends and fans who admire his every acquisition, seeking to purchase or swap rare treasures with their original packaging intact.

By contrast, I collect Voodoo dolls, for which the conventions are largely unpublicized and which no one seems interesting in trading.

The idea of creating and then affecting an inanimate representation of a living thing is thousands of years old. The Egyptians buried their dead kings with dozens of tiny statues of servants which would come to life to serve their masters in the next world, and ancient Romans crafted small likeness of friends and enemies to use in prayers to their many deities. In China, small dolls were artfully sculpted and honored as family ancestors.

In fact, you’d be hard pressed to find a civilization that did not have some sort of similar lore. The act of creation is infused with irresistible mystic qualities; once we make it, we can nurture it or destroy it. That is our god-like choice.

So you can clearly see why this is way more fun than collecting Star Wars figures. 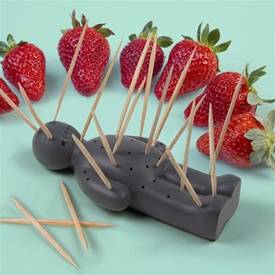 Now flash forward a few dozen centuries to the sixteen hundreds, when the first West African slaves were kidnapped to the islands in the Caribbean – bringing with them their Arawakian religious beliefs rife with the use of “poppets” (a doll meant to represent a person).

These were in fact power objects, rather than magical surrogates for an intended target of Satanic-driven sorcery.

By the time the Arawakian religion was hidden beneath the trappings of the Catholicism they were forced to adopt, the slaves who were now a permanent fixture in Haiti developed the practice of nailing crude poppets to a trees near cemeteries, to act as messengers to their dead loved ones.

Now in the twenty-first century, both the hybrid religion of Voodoo and its associated dolls have been co-opted by decades of half-truths, fanaticism and fear until neither bears much of a resemblance to their original forms.

Which I guess is ultimately why I find them so fascinating, and apparently I’m far from alone in this. 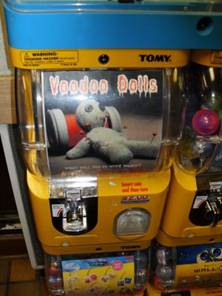 On a recent trip out – for sushi of all things – I came across a vending machine dispensing Voodoo dolls.

Yes, by all means, go back and read that line again because that’s how I felt when I saw the machine. I mean, really? For one dollar in quarters, you can start your very own collection. For me, this has become more of a reason to go out for sushi than the raw fish.

A voodoo toothpick holder was a rather interesting hostess gift I received during this year’s Super Bowl party. Though I wasn’t entirely sure what message it was sending, considering it came from the new wife of an old college buddy, I decided to set that all aside and embrace what is now one of my favorite kitchen accessories.

Order one of your very own here for around $6.

And finally, just about the best thing ever: while indulging in another personal obsession, The Food Network, I caught a segment on a donut shop in Portland, Oregon called “Voodoo Donuts.”

If that wasn’t enough, their most popular menu item, the “Voodoo Doll,” is filled with raspberry jelly so it will bleed properly through the chocolate frosting when pierced by the pretzel stake, which is priceless on more levels than I can say. 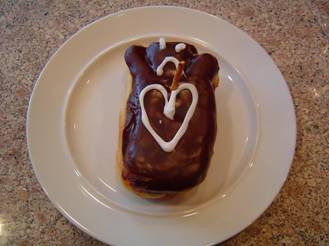 The poppets who originated in the ancient beliefs of Western Africa have morphed into a pop culture icon which drives tourism and entertainment, so ultimately the god-like powers they wielded haven’t really diminished that much over time.

And the important bit to remember is that if you ever visit a friend whose personal space is populated by evil-looking little dolls, don’t jump to conclusions. The primary message in their origin is that evil once done returns times three.

And that being said, unlike my friend with the Star Wars collection I never worry about anyone attempting to rob my house…not with the security system I have.